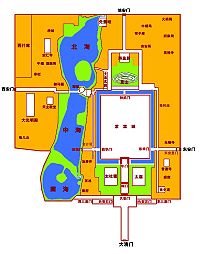 The Imperial City (Chinese: 北京皇城; pinyin: Běijīng Huángchéng; Manchu: Dorgi hoton, literally "the inner city") is a section of the city of Beijing in the Ming and Qing dynasties, with the Forbidden City at its center. It refers to the collection of gardens, shrines, and other service areas between the Forbidden City and the Inner City of ancient Beijing. The Imperial City was surrounded by a wall and accessed through six gates and it includes such historical places as the Forbidden City, Tiananmen, Zhongnanhai, Beihai Park, Zhongshan Park, Jingshan, Imperial Ancestral Temple, and Xiancantan.[1] 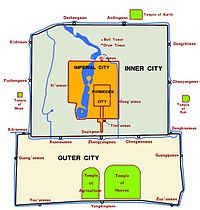 Location of the Imperial City within the walled city of Beijing in the Qing dynasty.

The Gate of China, formerly the formal gateway to the Imperial City. This view is from the Zhengyangmen. Behind the Gate of China is Tiananmen and the Forbidden City.

Tiananmen, the southern gate of the Imperial City 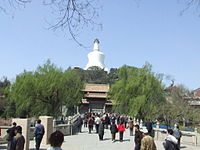 The Beihai Park, a former imperial garden centred on one of the lakes which cover most of the western part of the former Imperial City. 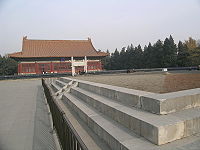 The Altar of Earth and Harvests in the Imperial City, built in 1421. The altar compound is now Zhongshan Park. 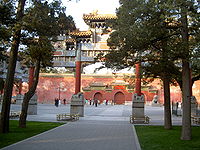 Jingshan Hill, an artificial hill with five peaks located to the north of the Forbidden City.

In the Yuan dynasty, Beijing was known as Dadu, and the Imperial City formed the centre of the city. In 1368, the Ming armies conquered Dadu, and changed its name to "Beiping" (the two characters meaning "north" and "peace" or "pacified"), with the capital moved to Nanjing. Because the Imperial City was untouched by battle, most of the Imperial City survived the war; however, in 1369, the Hongwu Emperor ordered that the Imperial City be demolished.

In 1370, the Hongwu Emperor's fourth son Zhu Di was created Prince of Yan, with seat in Beiping. In 1379 he built a princely palace within the Yuan Imperial City.

In 1399, Zhu Di launched a coup d'état and ascended to the throne to become Yongle Emperor in 1402. In 1403, the name of Beiping was changed to Beijing (literally "the Northern Capital"), and in 1406 a plan was drafted to move the capital to Beijing.

In 1406, construction of the Forbidden City began, copying the layout of the existing palaces in Nanjing. The new imperial palace was placed to the east of the Yuan palace, in order to place the Yuan palace in the "White Tiger" or "Kill" position in feng shui. Also for feng shui reasons, earth dug up from construction of the moat were used to construct Jingshan Hill to the north of the imperial palace.

On the basis of the Yuan Imperial City, the area was expanded to encompass the lakes of Zhongnanhai and Beihai and a significant area beyond.

To the south of the forbidden City are the Imperial Shrine of Family or Imperial Ancestral Temple (太庙) and Shrine of State (太社稷). Further to the south was the "Corridor of a Thousand Steps", to either side of which are the offices of the various government ministries.

Also housed in the Imperial City were a number of service buildings for the imperial palace, warehouses, Taoist temples, and a palace for the Imperial Grandson.

Republic of China to present

After the fall of the Qing dynasty in 1912, the Republic of China government took over the Imperial City. Zhongnanhai was, for a time, converted into the Presidential Palace. The Imperial Shrines became a part of the Palace Museum. Beihai and Jingshan became public parks. Most of the former temples and imperial warehouses gradually became private residences.

In 1912, during a coup by warlord Cao Kun, the Donganmen gate was destroyed by fire. In 1914, the Corridor of a Thousand Steps was demolished to make way for Zhongshan Park, named after Sun Yat-sen. In 1915, in order to improve traffic, much of the wall surrounding the Imperial City was demolished. After the capital was moved to Nanjing, Zhongnanhai became a public park.

In 1949, the People's Republic of China was established in Beijing. In the next few years, Gate of China, Left Chang'an Gate, Right Chang'an Gate, the three remaining eastern and western gates, and Di'anmen were demolished. Zhongnanhai became the leadership compound of the new government, housing the central headquarters of the Communist Party of China and the State Council. Many of the surviving buildings in the former garden were demolished.

The area to the west of Beihai Park were occupied by the Department of Defence, with a large office building now dominating the park skyline. Most of the temples in the Imperial City were occupied by units of the People's Liberation Army. Some of these buildings remain occupied and are in severe disrepair.

In recent decade, the Beijing municipal government has restored several of these temples, and established a park around the remaining sections of the Imperial City wall. Plans were drawn up to gradually move out institutions occupying various historical buildings . In 2004, a 1984 ordinance relating to building height and planning restriction was renewed to establish the Imperial City area and the northern city area as a buffer zone for the Forbidden City. In 2005, a proposal was released to include the Imperial City and Beihai as extension items to the Forbidden City as a World Heritage Site.