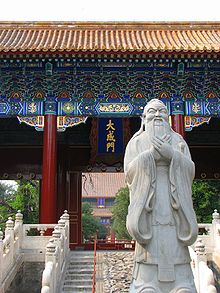 A statue of Confucius 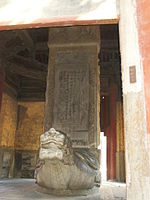 A stone tablet inside the Confucius Temple

The Temple of Confucius at Beijing (北京孔庙) is the second largest Confucian Temple in China, after the one in Confucius' hometown of Qufu.

The temple was built in 1302, and officials used it to pay their respects to Confucius until 1911. The compound was enlarged twice, during the Ming and Qing dynasties and now occupies some 20,000 square meters. From 1981 until 2005,[1] the Temple of Confucius also housed part of the art collection of the Capital Museum. It stands on Guozijian Street near the Imperial Academy.

The complex includes four courtyards aligned along a central axis. From south to north, noteworthy structures includes the Xianshi Gate (先师门), Dacheng Gate (Gate of Great Accomplishmen, 大成门), Dacheng Hall (Hall of Great Accomplishment, 大成殿) and Chongshengci (崇圣祠).[2] Inside the temple there are 198 stone tablets positioned on either side of the front courtyard, and they contains more than 51,624 names of Jinshi (advanced scholars) of the Yuan, Ming and Qing dynasties, and 14 stone stele pavilions of the Ming and Qing dynasties that hold various historical documents of ancient China.[2]

The temple also contains stone tablets recording the names of many generations of scholars who passed the Imperial Examination, a reproduction of a Western Zhou period stone drum made during the reign of Qianlong (1735-96), and stone steles containing the Thirteen Confucian Classics, presented by the city of Jintan in Jiangsu Province.

There is set of carved stone drums made between 1736-1795 during the Qianlong period of the Qing Dynasty held within the Gate of Great Accomplishment, and there is also a large collection of ancient Chinese musical instrument located within the Hall of Great Perfection, along with the central shrine to Confucius.[3]

There are various carvings inside the temple ground. One notable example is a famous carving of "two flying dragons playing a pearl among clouds"; this rare image is seldom to be found in other Confucius temples in China or East Asia, and it is often used in the imperial palaces as dragon is usually solely reserved for emperors.[2]

The Temple has many old trees, including one Cypress tree known as the "Touch Evil Cypress" (Chu Jian Bai), that has been made famous by folklore through the ages. Its name derives from a story from the Ming Dynasty that when a famously corrupt official was passing by, the tree knocked off his hat, and since then people have thought this particular tree could distinguish between good and evil.[2]