A destroyer escort (DE) is the classification for a smaller, lightly armed warship designed to be used to escort convoys of merchant marine ships, primarily of the United States Merchant Marine in World War II. It is employed primarily for anti-submarine warfare, but also provides some protection against aircraft and smaller attack vessels employed in this application. The US built roughly 457 destroyer escorts spread out over 8 classes. The Royal Navy equivalent of the destroyer escort was known as a frigate. 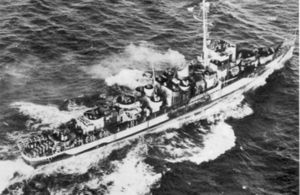 The Lend-lease Act was passed into law in the USA in March 1941 enabling the United Kingdom to procure merchant ships, warships, munitions and other materiel from the USA, in order to help with the war effort. This enabled the UK to commission the USA to design, build and supply an escort vessel that was suitable for anti-submarine warfare in deep open ocean situations, which they did in June 1941. Captain E.L. Cochrane of the American Bureau of Shipping came up with a design which was known as the British Destroyer Escort (BDE). The BDE designation was retained by the first six Destroyer Escorts transferred to the United Kingdom ( BDE 1, 2, 3, 4, 12 and 46); of the initial order of 50 these were the only ones the Royal Navy received, the rest being reclassified as Destroyer Escort (DE) on January 25, 1943 and taken over by the United States Navy.[1]

When the United States entered the war, and found they also required an anti-submarine warfare ship and that the destroyer escort fitted their needs perfectly, a system of rationing was put in place whereby out of every five destroyer escorts completed, four would be allocated to the U.S. Navy and one to the Royal Navy. 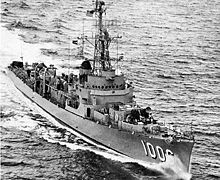 Full size destroyers must be able to keep up with and exceed the speed of fast capital ships, typically needing better than 25-35 knot speeds (dependent upon the era and navy) and carrying torpedoes and a smaller caliber of cannon to use against enemy ships, as well as anti-submarine detection equipment and weapons.

A destroyer escort only needed to be able to maneuver relative to a slow convoy (which in WW II would travel at 10 to 12 knots), defend against aircraft, detect, pursue and attack submarines. These lower requirements greatly reduce the size, cost, and crew required for the destroyer escort. While fleet destroyers were more effective for anti-submarine warfare, the destroyer escort outweighed this by being able to be built faster and cheaper. Destroyer escorts were also considerably more seaworthy than corvettes.

Some 95 destroyer escorts were converted to APDs (High Speed Transports). This involved adding an extra deck which allowed space for about 10 officers and 150 men. Two large davits were also installed, one on either side of the ship from which landing craft (LCVP) could be launched. The modern Littoral Combat Ship also adds transport and boat launching capabilities to a ship smaller than a destroyer.

As an alternative to steam turbine propulsion, many US DEs of the WW2 period had diesel-electric or turbo-electric drive, in which the engine rooms functioned as power stations supplying current to electric motors sited close to the propellers. Electric drive was selected because it does not need gearboxes (which were heavily in demand for the fast fleet destroyers) to adjust engine speed to the much lower optimum speed for the propellers. The current from the engine room can be used equally well for other purposes, and post-WW2 many DEs were recycled as floating power stations for coastal cities in Latin America under programs funded by the World Bank.

With no armor, only two 5-inch guns and 3 Mark-15 torpedoes capable of punching a hole in enemy hulls, her crew lacked the weapons and training in tactics to compete with the much larger heavy cruiser Chokai. The Roberts dodged shellfire to fire a salvo of 3 torpedoes which struck the cruiser. The battle continued for an hour, and the Roberts fired over 600 5-inch shells, and hit the upper works with 40 mm Bofors and 20 mm anti-aircraft guns at close range. Chikuma's bridge was set afire and the number 3 gun turret was disabled. Chikuma scored two direct hits on the Roberts, which soon sank with 89 of her crew. After the battle the Roberts became known as "the destroyer escort that fought like a battleship". The Roberts was an instrumental part of a small task force of light ships that forced a much larger armoured battle force to turn away from American landing forces in Leyte Gulf, though at a high cost.

After World War II United States Navy destroyer escorts were referred to as ocean escorts, but retained the hull classification symbol DE. However other navies, most notably those of NATO countries and the USSR, followed different naming conventions for this type of ship which resulted in some confusion. In order to remedy this problem the 1975 ship reclassification reclassified ocean escorts (and by extension, destroyer escorts) as Frigates (FF). This brought the USN's nomenclature more in line with NATO, and made it easier to compare ship types with the Soviet Union (see Cruiser Gap). As of 2006 there are no plans for future frigates for the US Navy. The DDG Zumwalt and the Littoral Combat Ship (LCS) are the main ship types planned in this area. One major problem with ship classification is whether to base it on a ship's role (such as escort or air defense), or on its size (such as the amount of tons). One example of this ambiguity are the Ticonderoga-class air defense ships, which are classified as cruiser even though they use the same hull as the Spruance class destroyer.

Under the Lend-Lease agreement, the Royal Navy received 32 destroyer escorts of the Evarts class and 46 of the Buckley class. The Royal Navy initially used the names of captains of the Napoleonic Wars for the ships; hence the Admiralty calling these ships the Captain class frigates.

The main design difference between the Royal Navy frigates and the US Navy destroyer escorts was that the British Buckley class had the forward torpedo tubes removed (the Evarts class was not designed to carry torpedo tubes[2] As well, British frigates had the ice cream makers, the iced water fountains, the dishwashers, and laundries (in some ships) removed, and the replacing of the primitive American two seat "thunder trough" toilets (which did not offer even so much as a simple canvas screen to spare blushes) with an enclosed water closet.