Q-ships, also known as Q-boats, Decoy Vessels, Special Service Ships, or Mystery Ships, were heavily armed merchant ships with concealed weaponry, designed to lure submarines into making surface attacks. This gave Q-ships the chance to open fire and sink them. The basic ethos of every Q-ship was to be a wolf in sheep's clothing.

They were used by the British Royal Navy (RN) during the First World War and by both the RN and the United States Navy during the Second World War (1939–1945), as a countermeasure against German U-boats and Japanese submarines.

Following the First Battle of the Atlantic, by 1915 Britain was in desperate need of a countermeasure against the U-boats that were strangling her sea-lanes. Convoys, which had proved effective in earlier times (and would again prove effective during the Second World War), were rejected by the resource-strapped Admiralty and the independent captains. Depth charges of the time were relatively primitive, and almost the only chance of sinking a submarine was by gunfire or by ramming while on the surface. The problem was luring the U-boat to the surface.

A solution to this was the creation of the Q-ship, one of the most closely guarded secrets of the war. Their codename referred to the vessels' home port, Queenstown, in Ireland.[1] These became known by the Germans as a U-Boot-Falle ("U-boat trap"). A Q-ship would appear to be an easy target, but in fact carried hidden armaments. A typical Q-ship might resemble a tramp steamer sailing alone in an area where a U-boat was reported to be operating. By seeming to be a suitable target for the U-boat's deck gun, a Q-ship might encourage the U-boat captain to make a surface attack rather than use one of his limited number of torpedoes. The Q-ships' cargoes were light wood (balsa or cork) or wooden caskets, and even if torpedoed they would remain afloat, encouraging the U-boat to surface and sink them with a deck gun. The crew might even pretend to "abandon ship". Once the U-boat was vulnerable, the Q-ship's panels would drop to reveal the deck guns, which would immediately open fire. At the same time, the White Ensign (Royal Navy flag) would be raised. With the element of surprise, a U-boat could be quickly overwhelmed.

The first Q-ship victory was on 23 June 1915, when U-40 was sunk off Eyemouth by the submarine HMS C24, cooperating with the decoy vessel Taranaki, commanded by Lieutenant Frederick Henry Taylor CBE DSC RN. The first victory by an unassisted Q-ship came on 24 July 1915 when the Prince Charles, commanded by Lt Mark-Wardlaw, DSO, sank U-36. The civilian crew of Prince Charles received a cash award. The following month, an even smaller converted fishing trawler renamed HM Armed Smack Inverlyon successfully destroyed UB-4 near Great Yarmouth. Inverlyon was an unpowered sailing ship fitted with a small 3 pounder (47 mm) gun. The British crew fired 9 rounds from the 3 pounder into U-4 at close range, sinking her with the loss of all hands despite the attempt of Inverlyon's skipper to rescue one surviving German submariner.

On August 19, 1915 Lieutenant Godfrey Herbert RN of the HMS Baralong sank U-27, which was preparing to attack a nearby merchant ship. About a dozen of the U-boat sailors survived and swam towards the merchant ship. Herbert, allegedly fearing that they might scuttle her, ordered the survivors to be shot in the water and sent a boarding party to kill all who had made it aboard. This became known as the "Baralong Incident". 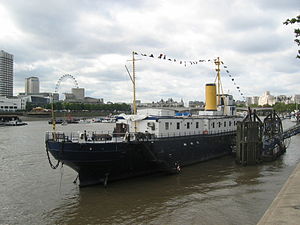 HMS President in the Thames.

Lieutenant-Commander William Edward Sanders VC, DSO, a New Zealander commanding HMS Prize, was awarded the Victoria Cross for an action on 30 April 1917 with U-93, which was severely damaged. Sanders waited, while his ship sustained heavy shellfire, until the submarine was within 80 yards, whereupon he hoisted the White Ensign and the Prize opened fire. The submarine appeared to sink and he claimed a victory. However, the badly damaged submarine managed to struggle back to port. With his ship accurately described by the survivors of U-93, Sanders and his crewmen were all killed in action when they attempted a surprise attack on U-43 on 14 August 1917.

In a total of 150 engagements, British Q-ships destroyed 14 U-boats and damaged 60, at a cost of 27 Q-ships lost out of 200. Q-ships were responsible for about 10% of all U-boats sunk, ranking them well below the use of ordinary minefields in effectiveness.

The Imperial German Navy commissioned six Q-boats during the Great War for the Baltic Sea into the Handelsschutzflottille. Both were unsuccessful in destroying any enemy submarines. The famous Möwe and Wolf were merchant raiders.

A surviving example of the Q-ships is HMS Saxifrage, a Flower class sloop of the Anchusa group completed in 1918. She was renamed in 1922 as HMS President and served as the London Division RNR drill ship until 1988, when she was sold privately and remains moored at King's Reach. 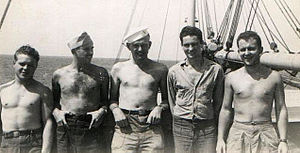 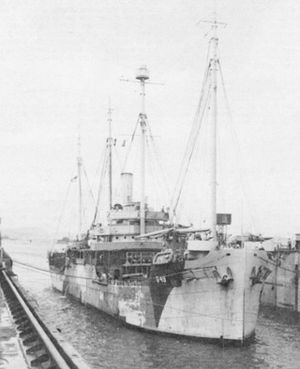 Nine Q-ships were commissioned by the Royal Navy in September and October 1939 for work in the North Atlantic:[2]

Prunella and Edgehill were torpedoed and sunk 21 and 29 June 1940 without even sighting a U-Boat. The rest of the vessels were paid off in March 1941 without successfully accomplishing any mission.[3]

By January 12, 1942, the British Admiralty's intelligence community had noted a "heavy concentration" of U-boats off the "North American seaboard from New York to Cape Race" and passed along this fact to the United States Navy. That day, U-123 under Kapitänleutnant Reinhard Hardegen, torpedoed and sank the British steamship Cyclops, inaugurating Paukenschlag (literally, "a strike on the kettledrum" and sometimes referred to in English as "Operation Drumbeat"). U-boat commanders found peacetime conditions prevailing along the coast: towns and cities were not blacked-out and navigational buoys remained lighted; shipping followed normal routines and "carried the normal lights." Paukenschlag had caught the United States unaware.

Losses mounted rapidly. On January 20, 1942, Commander-in-Chief, United States Fleet (Cominch), sent a coded dispatch to Commander, Eastern Sea Frontier (CESF), requesting immediate consideration of the manning and fitting-out of "Queen" ships to be operated as an antisubmarine measure. The result was "Project LQ."

The careers of all five ships were almost entirely unsuccessful and very short, with USS Atik sunk on its first patrol;[1] all Q-ships patrols ended in 1943.

American Q-ships also operated in the Pacific Ocean. One was USS Anacapa (AG-49) formerly the lumber transport Coos Bay which was converted to Q-ship duty as project "Love William". Anacapa was not successful in engaging any enemy submarines, although she is believed to have damaged two friendly subs with depth charges when they were improperly operating in her vicinity. Anacapa was also withdrawn from Q-ship duty in 1943 and served out the remainder of WWII as an armed transport in the South Pacific and Aleutian Islands.

Use against modern pirates

Attacks on merchant ships by pirates originating on the Somalia coast have brought suggestions from some security experts that Q-ships be used again to tempt pirates into attacking a well defended ship.[4]

In Ernest Hemingway's novel Islands in the Stream the main character Thomas Hudson captains a Q-ship for the US Navy around Cuba as he hunts the survivors of a sunken German U-boat.

Also, in David Weber's science fiction novel Honor Among Enemies, the main character Honor Harrington commands a squadron of Q-ships in action against pirates and enemy commerce raiders in the Silesian Confederacy.

The term "Q-car" (or "sleeper") has subsequently been used to describe cars that have much higher than average performance (often through extensive modification) but look like a conventional, uninteresting family transport.

During the Rhodesian insurgency in the 1970s government forces used heavily armed vehicles disguised as civilian trucks to tempt guerrillas into ambushing them, also calling them "Q-cars".

A Q-train looks outwardly like an ordinary rail train, but is staffed by British Transport Police to combat trespassing and vandalism on railway routes.