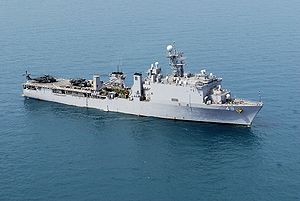 The LSD came as a result of a British requirement during the Second World War for a vessel that could carry large landing craft across the seas at speed.

The first LSD came from a design by Sir Rowland Baker who had designed the British Landing Craft, Tank. It was an answer to the problem of launching small craft rapidly. The "Landing Ship Stern Chute" which was a converted train ferry was an early attempt. Thirteen Landing Craft Mechanized (LCM) could be launched from these ships down the chute. The Landing Ship Gantry was a converted tanker with a crane to transfer its cargo of landing craft from deck to sea - 15 LCM in a little over half an hour.[1]

The design was developed and built in the US for the USN and the Royal Navy. The LSD could carry 36 LCM at 16 knots. It took one and a half hours for the dock to be flooded down and two and half to pump it out. When flooded they could also be used as docks for repairs to small craft.

Vessels of this classification

Currently there are two classes of LSDs in the United States Navy: