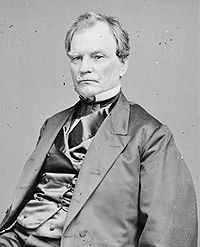 Benjamin F. Wade came within one vote of being the first president pro tempore to succeed to the presidency after the impeachment trial of Andrew Johnson in 1868.

Following the resignation for health reasons of President pro tempore William P. Frye, a Senate divided among progressive Republicans, conservative Republicans, and Democrats reached a compromise by which each of their candidates would rotate holding the office from 1911 to 1913. (See Presidents pro tempore of the United States Senate, 1911-1913.)[10]

Only three former presidents pro tempore ever became vice president: John Tyler, William R. King and Charles Curtis, and Tyler also the only one to have become president, when he succeeded William Henry Harrison in 1841. The ceremonial post of Deputy President pro tempore was created for Hubert Humphrey, a former vice president, in 1977 following his losing bid to become the Senate majority leader.[15] The Senate resolution creating the position stated that any former president or former vice president serving in the Senate would be entitled to this position, though none has served since Humphrey's death in 1978,[11] and Walter Mondale, who sought a seat in Minnesota in 2002, is the only one to have tried. Andrew Johnson is the only former president to have subsequently served in the Senate.

The post may be largely honorary and ceremonial; nevertheless, it comes with a salary. By statute, the compensation granted to the position holder equals the rate of annual compensation paid to the president pro tempore, majority leader, and minority leader. (See 2 U.S.C. § 32a.)[11] 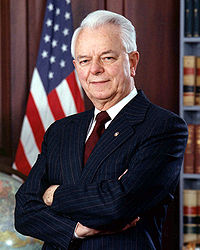 Strom Thurmond (R-South Carolina) was the first person elected president pro tempore emeritus, being elected when the Democratic Party regained a majority in the Senate in 2001.[16] With the change in party control, Democrat Robert Byrd of West Virginia replaced Thurmond as president pro tempore, reclaiming a position he had previously held from 1989 to 1995 and again briefly earlier in 2001. Thurmond served as president pro tempore emeritus until his retirement from the Senate on January 3, 2003, which coincided with another party change (from Democratic to Republican control) making Byrd the second person to hold the position.[11]