Congressional Quarterly, Inc., or CQ, is a privately owned publishing company that produces a number of publications reporting primarily on the United States Congress. CQ is wholly owned by The Economist Group and is a member of the CQ-Roll Call Group. 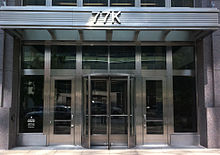 CQ was founded in 1945 by Nelson Poynter and his wife, Henrietta Poynter, with the aim of providing a link between local newspapers and the complex politics within Washington D.C. CQ has the largest news team covering Capitol Hill, with more than 100 reporters, editors and researchers. CQ's readership includes 95 percent of the members of Congress, academic and media outlets, as well as members of business and nonprofit organizations, government affairs and the executive branch.

Thomas N. Schroth, who had been managing editor of The Brooklyn Eagle, was elected in October 1955 as executive editor and vice president.[1] Schroth built the publication's impartial coverage, with annual revenue growing during his tenure from $150,000 when he started to $1.8 million. In addition to adding a book division, Schroth added many staff members who achieved future journalistic success, including David S. Broder and Elizabeth Drew. He was fired from the Congressional Quarterly in 1969 after festering disagreements with Poynter over editorial policy at the publication and Schroth's efforts to advocate "more imaginative ways of doing things" reached a boil.[2]

In 1965, Poynter summed up his reasons for founding CQ, saying: "The federal government will never set up an adequate agency to check on itself, and a foundation is too timid for that. So it had to be a private enterprise beholden to its clients."

Despite its name, CQ was published quarterly for only one year. Demand drove more frequent updates, first weekly, then daily. CQ was also an early leader in delivering information on a real-time basis, starting with a dial-up service in 1984. Its website dominates the market for online legislative tracking information and has been nominated for several awards. In recent years, CQ has launched several electronic-only newsletters with greater focus on particular areas, including CQ Homeland Security, CQ Budget Tracker, CQ HealthBeat, and CQ Green Sheets.

In 2005, CQ's flagship publication, the Weekly Report, was re-launched as CQ Weekly with a wider focus, including "government, commerce and politics." A daily publication, CQ Today, also is available every day when Congress is in session. CQ Today's main competition is Atlantic Media's CongressDaily.

Eight CQ reporters have won the "Everett McKinley Dirksen Award for Distinguished Reporting of Congress" from the National Press Foundation: Alan Ehrenhalt in 1983, Joan Biskupic in 1991, Janet Hook in 1992, George Hager in 1996, Jackie Koszezuk in 1997, Sue Kirchhoff in 2000, John Cochran in 2003, and Jonathan Allen in 2008.[4]

CampaignNetwork.org is a collaborative project with C-SPAN covering election reporting announced on August 31, 2006.[5]

In 1999, CQ Executive Conferences was transferred to TheCapitol.Net, a non-partisan firm based in Alexandria, VA. TheCapitol.Net is no longer an affiliate of Congressional Quarterly.