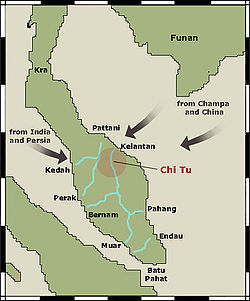 Chi Tu (Malay: Tanah Merah) is an ancient kingdom mentioned in the history of China. The Sui Dynasty (581-618) annals describe an advanced kingdom called Chi Tu. The location of Chi Tu was disputed to be around Kelantan or Pahang state in Malay Peninsula, or in Songkhla and Pattani Province of southern Thailand. The best evidence to support the Kelantan theory was when the envoys left Chi Tu, the sail took 10 days to reach Champa, this indicates the kingdom was located somewhere ‘red earth’ around the main river of Kelantan. The inscribed Buddhagupta Stone found in Kedah mentioned a Raktamrttika, the meaning is red earth land. 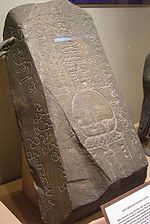 Replica of Buddhagupta stone on display at the National History Museum, Kuala Lumpur.

Chi Tu kingdom along with Langkasuka, Kedah and others were early important trade centers (approximately 100 BCE to 700 CE). During this period, ships coming from China and Funan (from Indian Ocean as well) stop at the coast of Malay Peninsula. They get the local porters to transport the goods, using rafts, elephants and manpower along the Early transpeninsular routeway and part of the ancient Spice Route (Sea Route).

J.L. Meons (1937) believed that early Srivijaya was located in Kelantan and K.A. Nilakanta Sastri (1949) supported the idea. The Kelantan theory may not be far-fetched, since Chinese Sui Dynasty annals of the 7th century describe an advanced kingdom called Chi Tu as being in Kelantan, the name was later changed to "Sri Wijaya Mala". The capital of Sri Wijaya Mala was called "Valai", and it was situated along the upper Kelantan river of Pergau, known for its rich gold mines.