The United Left (Spanish: Izquierda Unida, IU) is a political coalition that was organized in 1986 as several political organisations opposed Spain joining NATO. It was formed by a number groups of leftists, greens, left-wing socialists and republicans, but was dominated by the Communist Party of Spain (PCE). The left-wing Carlist Party and Humanist Party were also founding members of the coalition but they parted ways in 1987.

From 1986 to 1999, its leader was the general secretary of the PCE, Julio Anguita, followed by Francisco Frutos. From 2001 to 2008 was Gaspar Llamazares who resigned following poor election results in 2008. From 2008 on it has been Cayo Lara. IU has an important support base in Andalusia, Madrid and Asturias, following the communist base of the PCE.

Following the tradition of the Spanish left since the formation of the Unified Socialist Party of Catalonia (PSUC) in 1936 (as communists and socialists joined forces in Catalunya), IU doesn't have any organization of its own in Catalonia. Until 1998 the referent of IU in Catalonia was Initiative for Catalonia (Iniciativa per Catalunya, now known as IC-V). But IC eventually broke relations with IU. A split in PSUC followed and a new Catalonian alliance, United and Alternative Left (Esquerra Unida i Alternativa, EUiA) was formed as the new Catalonian referent of IU. 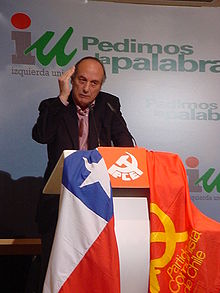 Paco Frutos campaigning in 2005 for IU at a PCE meeting (a Chilean flag and a Communist Party of Chile flag are visible).

IU contested the 2008 general election in coalition with IC-V. The coalition got 963,040 votes (3.8%) and two MPs (one of them by IC-V), its worst ever result. The provincial district distribution and the D'Hondt method, which regulates the allocation of seats in the Spanish Congress, favour the main lists in each electoral district. Since IU lists usually finish in third place or lower in each district, their share of seats in the Congress has usually been lower than their share of votes.

The 2011 local and regional elections saw IU halt their long term decline with their first gains since 1996.[3] In total IU increased their vote share by nearly 1% from 5.48% in 2007 to 6.33% in 2011, with the group gaining nearly 200 councillors and 12 members of regional assemblies.[3] They suffered setbacks in Córdoba, which they had governed since the 1970s (with the exception of a four year period in the 1990s) as the People's Party gained control of the council.[3] In the Asturian regional elections, although IU gained a seat, a right wing administration replaced the previous PSOE-IU coalition.[3]