Barts and The London School of Medicine and Dentistry

Barts and The London School of Medicine and Dentistry

Barts and The London School of Medicine and Dentistry is the medical school of Queen Mary, University of London.[1] The school was formed in 1995 by the merger of the London Hospital Medical College (the oldest medical school in England and Wales, founded in 1785), the Medical College of St Bartholomew's Hospital (the oldest remaining hospital in the United Kingdom, having been founded in 1123, with medical teaching beginning from that date) and Queen Mary and Westfield College.

The school exists on two main sites, having a presence at the site of both of the former colleges at and near their respective hospitals, St Bartholomew's Hospital (in Smithfield, City of London and nearby in Charterhouse Square), and the Royal London Hospital in Whitechapel, Tower Hamlets with an additional site at Queen Mary's main (Mile End) campus.[2] A new building (Blizard Building), named after the founder of The London Hospital Medical College, Sir William Blizard, was recently completed at the Royal London site, and houses research laboratories and is the main site for medical undergraduate teaching.

In the 2008 government Research Assessment Exercise, the school was ranked first for the quality of its medical research in London and fourth overall nationally; the dental school was ranked joint first. As of 2008 the school accepted 277 British medical students per annum and an additional 17 from overseas, making it one of the largest medical schools in the United Kingdom.[3] The medical school is a constituent college of the federal University of London, and a member of the United Hospitals. 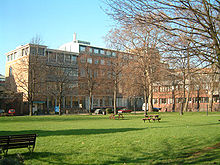 Part of the Charterhouse Square site

The Medical College at the Royal London Hospital, England's first official medical school, opened in 1785, pioneering a new kind of medical education, with an emphasis on theoretical and clinical teaching. A purpose-built lecture theatre was constructed at St Bartholomew's Hospital in 1791 and in 1822 the Governors approved the provision of medical education within the hospital. Later a residential college was established, which moved to premises at Charterhouse Square in the 1930s. At the Royal London, larger premises, still in use by the medical school, were built in Turner Street in 1854. In 1900 both medical colleges became constituent colleges of the University of London in the Faculty of Medicine.

The Dental School opened at the London in 1911, acquiring the new Dental Institute and expanding student numbers during the 1960s. Dental education developed during the 1970s, increasing collaboration between dentists and other professionals.

Between the Wars, students at the Royal London requiring a prerequisite MB (in biology, chemistry and physics) attended Queen Mary College for a year, before proceeding to a second MB at the London. Women students were first admitted to both colleges following World War II.

A close association between the two medical colleges was developed following the Royal Commission on Medical Education in 1968, and new links with the then Queen Mary College were established at the same time. In 1989 the pre-clinical teaching at the two medical colleges was merged and sited in the Basic Medical Sciences Building at Queen Mary (where it stayed until 2005, when it was moved to the Blizard Building at the Whitechapel campus). In 1992, St. Bartholomew's, the Royal London and the London Chest Hospital joined to form the Barts and The London NHS Trust, with a full merger of the medical colleges with Queen Mary taking place three years later.

On 2 March 2011, it was announced that Professor Richard Trembath would succeed Professor Sir Nicholas Wright as Warden of the School in Summer 2011.[4]

The school has a distinguished history in the field of research and teaching, and has been at the forefront in the development of a modern dental and medical curriculum. It serves a diverse population in East London and the wider Thames Gateway, with the differing demographics of East London in contrast to other areas of the country providing the school with a unique teaching opportunity, exposing students to situations and scenarios not commonly encountered elsewhere. Consequently, many of the school's research efforts are focussed on conditions that are prevalent or endemic to the local area, for example, diabetes, hypertension, heart disease, tuberculosis and other chronic lung diseases, HIV, oral disease, and cancer.

St. Bartholomew's Hospital is a recognised area of excellence in the fields of cardiovascular and cancer research, whereas the Royal London Hospital is London's leading trauma and emergency centre. To continue and sustain this standard of care, planning permission was awarded in March 2005 for a £1 billion redevelopment and expansion of the Royal London. Upon its completion in 2011, the Royal London Hospital will consolidate its position as London’s leading trauma and emergency care centre, will have one of Europe’s largest renal services and the capital’s second biggest paediatric service. St. Bartholomew's Hospital is also currently being refurbished and refitted in order to continue its specialised approach to cardiovascular and cancer care. A further £100 million has been invested in creating leading-edge research facilities at both the Whitechapel and West Smithfield/Charterhouse Square campuses, so that the school can continue attracting world-class researchers and funding.

The school has six research institutes:

The Research Assessment Exercise (RAE) is one of the few ways in which the academic quality of British medical and dental schools can be compared and ranks research by two principal measures: the proportion of work graded 4* and 3* – world-leading or internationally recognised respectively - and the Grade Point Average (GPA) across the whole profile of the submission.

The results of the 2008 Research Assessment Exercise (RAE), published in December 2008, confirmed Barts and The London School of Medicine and Dentistry as one of the leading medical and dental schools in the United Kingdom. For medicine, the school ranked top in the quality of its research in London, and fourth nationally (behind Cambridge, Oxford and Edinburgh); for dentistry, the school was awarded joint first ranking (along with Manchester).

According to the rankings published in the Times Higher Education, Barts and the London School of Medicine and Dentistry was consistently ranked in the top five nationally for the following categories:

The Complete University Guide gave the medical school an overall ranking of sixth, and the dental school seventh, in the United Kingdom in 2012, citing the institution's strength in research.[citation needed]

Barts and The London Students' Association

Barts and The London Students' Association is the students' union for the medical and dental school, a largely independent arm of Queen Mary Students' Union (QMSU) formed when the student unions of St Bartholomew's Hospital Medical School and the London Hospital Clubs Union merged with QMSU at the time their parent bodies merged in 1995. The Students' Association has a very distinct culture from that of QMSU, with its own clubs and societies for most sports and activities, competing in the National Association of Medics' Sports against other schools and universities.