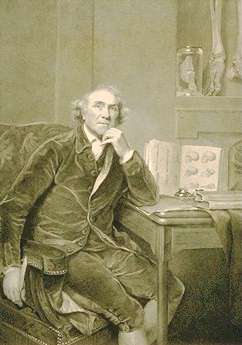 John Hunter (, - , ) was a Scottish surgeon regarded as one of the most distinguished scientists and surgeons of his day. He was an early advocate of careful observation and scientific method in medicine. The of was named in his honour.

Hunter was born at Long Calderwood, then near , , the youngest of 10 children. Three of these children had died of illness before John Hunter was born. One of these three had been named John Hunter also. An older brother was William Hunter, the anatomist. As a youth, John showed little talent, and helped his brother-in-law as a cabinet-maker.

In 1771 he married Anne Home, daughter of Robert Boyne Home and sister of Sir . They had four children, two of whom died before the age of 5 and one of whom, Agnes (their fourth child), married General Sir .

His death in 1793 followed a heart attack during an argument at St George's Hospital over the admission of students.

When nearly 21 he visited William in London, where his brother had become an admired teacher of anatomy. John started as his assistant in dissections (1748), and was soon running the practical classes on his own. [Brook C. 1945. "Battling surgeon". Strickland, Glasgow. p15–17]

Hunter studied under at and at . After qualifying he became Assistant Surgeon (house surgeon) at (1756) and Surgeon (1768). He was commissioned as an Army surgeon in 1760 and was staff surgeon on expedition to in 1761, and served in 1762 with the British Army in the expedition to Portugal. ["Shorter DNB" (Dictionary of National Biography) Vol 1: To 1900. p662]

Hunter was an excellent anatomist; his knowledge and skill as a surgeon was based on sound anatomical background. Among his numerous contributions to medical science are :

* study of human and advancement of
* extensive study of inflammation
* fine work on gun-wounds
* some work on , including possibly inoculating himself with venereal disease in 1767 to carry out further study
* an understanding of the nature of , and verifying that fats are absorbed into the lacteals, a type of small intestine lymphatic capillary, and not into the intestinal blood capillaries as was generally accepted.
* The first complete study of the development of a child from fetus to birth
* proves that the maternal and foetal blood supplies are separate
* Unravelling of one of the major anatomical mysteries of the time- the role of the

In 1783 he moved to a large house in , where today there stands a statue to him. The space allowed him to arrange his collection of nearly 14,000 preparations of over 500 species of plants and animals into a teaching museum.

In 1783 he acquired the skeleton of the 7' 7" Irish giant against Byrne's clear deathbed wishes -- he asked to be buried at sea. Hunter bribed a member of the funeral party (possibly for £500) and filled the coffin with rocks at an overnight stop, then subsequently published a scientific description of the anatomy and skeleton which now resides in the Hunterian Museum at the Royal College of Surgeons in London. ["Doctors: the biography of medicine" by .] In 1799 the government purchased Hunter's collection of papers and specimens, which it presented to the Company of Surgeons.

Hunter's character has been discussed by biographers:

:"To the kindness of his disposition, his fondness for animals, his aversion to operations, his thoughtful and self-sacrificing attention to his patients, and especially his zeal to help forward struggling practitioners and others in any want abundantly testify. Pecuniary means he valued no further than they enabled him to promote his researches; and to the poor, to non-beneficed clergymen, professional authors and artists his services were rendered without remuneration." ["Encyclopædia Brittanica", 11th edition.]

:"His nature was kindly and generous, though outwardly rude and repelling... Later in life, for some private or personal reason, he picked a quarrel with the brother who had formed him and made a man of him, basing the dissension upon a quibble about priority unworthy of so great an investigator. Yet three years later, he lived to mourn this brother's death in tears." [Garrison, Fielding H. 1913. "An introduction to the history of medicine". Saunders, Philadelphia PA. p274 ]

In general, he had a reputation as a blunt speaker with an argumentative nature.

Hunter was the basis for the character "Jack Tearguts" in 's early satire, .

A bust of John Hunter stands on a pedestal outside the main entrance to in , South London, along with a lion and unicorn taken from the original Hyde Park Corner building. There is also a bust of him in in London's West End and in the South West corner of .

The , the largest hospital in Newcastle, , and principal teaching hospital of the University of Newcastle, is named after Hunter (as well as two other historically significant John Hunters).