Cracker is a British crime drama series produced by Granada Television for ITV and created and principally written by Jimmy McGovern. The series is centered on a criminal psychologist (or "cracker"), Eddie "Fitz" Fitzgerald, played by Robbie Coltrane. Set in Manchester, it consists of three series which were originally aired from 1993 to 1995. A 100-minute special set in Hong Kong followed in 1996, and another two-hour story in 2006.

Fitz is a classic antihero, unfaithful to his wife, alcoholic, a chain smoker, obese, addicted to gambling, manic, foul-mouthed and sarcastic, and yet cerebral and brilliant. He is a genius in his specialty: criminal psychology. As Fitz confesses in "Brotherly Love": "I drink too much, I smoke too much, I gamble too much. I am too much."

Each case spanned several episodes and cliffhangers were quite often used, but it was not until the end of the second series that a cliffhanger was employed to tie off the series. Some of the plotlines in the cases took as their starting point real events such as the Hillsborough disaster, while others were purely fictional with only tangential ties to actual events.

Several different psychotic types were explored during the run of the show with increasingly complex psychological motivations that, as the series entered the middle of the second series, began to expand beyond the criminals being investigated to the regular cast members. As the series moved forward the storylines became as much about the interactions of the regulars as it was about the crimes. In many later episodes, in fact, the crimes often became background to intense, provocative explorations of the police officers' reactions to the crimes they investigated.

To emphasise how fine a line the police (and Fitz) walk in their close association with criminals, all three series featured several stories in which the police themselves become criminals or victims of crime.

Although Jimmy McGovern wrote the majority of the early stories, Ted Whitehead contributed the fifth serial, "The Big Crunch". Claiming that he had "nothing more to write about,"[1] McGovern originally planned to leave after the second series, but was allowed to write the controversial rape storyline, "Men Should Weep", when he agreed to contribute a three-part story to the third series. Two of McGovern's stories, "To Say I Love You" and "Brotherly Love" (from the first and third series respectively), received Edgar Awards from the Mystery Writers of America. Most of these episodes were directed by Tim Fywell.

Paul Abbott, who had produced the second series, wrote the remainder of the episodes (including the feature-length special "White Ghost"). Abbott later went on to create several high-profile dramas, including Touching Evil (1997), State of Play (2003) and Shameless (2004). Another crew member, Nicola Shindler, who worked as script editor on the programme, later went on to found the highly successful Red Production Company.

Of the regular cast, only Coltrane and Tomlinson featured in "White Ghost" (retitled "Lucky White Ghost" for some overseas markets), which was set in Hong Kong. Although the series was still drawing large audiences, after "White Ghost" Coltrane declined to return as Fitz unless McGovern returned to write the series.

Cracker returned to television screens a decade after "White Ghost" in the 2006 special episode, "Nine Eleven", written by McGovern and directed by Antonia Bird. The story saw the return of only Coltrane, Flynn and O'Brien in their previous roles. The new roles of DCI Walters, DS Saleh and DS McAllister were played by Richard Coyle, Nisha Nayar and Rafe Spall respectively. The story involved Fitz returning to Manchester after several years of living in Australia with Judith and his son James (who had been born during the final series of the original programme) to attend his daughter Katy's wedding. The murder of an American night club comedian sends the police to ask Fitz for his help.

The series was principally filmed in South Manchester, at locations including Didsbury (where Fitz lived) and the police station at Longsight. The internals for the police station were filmed in the old Daily Mirror offices in central Manchester, now The Printworks retail complex. Other Manchester locations included Victoria Railway Station, St Peter's Square, Old Trafford, the Arndale Centre, University of Salford, the Ramada Hotel and the Safeway supermarket in Chorlton-cum-Hardy.

Episodes varied in length from 50 to 120 minutes.

The original broadcast of episode one of the "Brotherly Love" story was an hour long (so 70 minutes with commercials) and shown on the Sunday before the regular Monday slot for the series. Further broadcasts of this episode, including VHS and DVD release, were edited down to the conventional 50 minute size.[2] 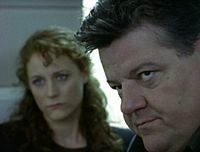 In some respects, Cracker stories are structured like episodes of Columbo. They often begin by showing the criminal committing the crime, and so sidestep the whodunnit format which is the central attraction of many television crime dramas. Both series feature a lead character who solves crimes while masking an intelligent, perceptive nature behind a slobbish exterior; Fitz delivers his summing-up in "To Say I Love You" while doing a Peter Falk impression. However, while Lieutenant Columbo invariably solves each case to perfection, Fitz's involvement often only exacerbates the situation, for example leading police to arrest the wrong man ("One Day A Lemming Will Fly"), or unwittingly causing a serial rapist to murder his victim ("Men Should Weep").

Cracker's conception was also in some ways a reaction against the police procedural approach of fellow Granada crime serial Prime Suspect, placing more emphasis on emotional and psychological truth than on correct police procedure. In an interview with the NME, McGovern dismissed Prime Suspect, noting that "Good TV writing has narrative simplicity and emotional complexity," and characterising the series as "A narratively complex story going up its own arse."[4] Gub Neal, who produced the first series of Cracker, is quoted as saying, "That we had adopted the right approach was confirmed for me when Jacky Malton, the senior woman police officer who advised on Prime Suspect, said that although the way things happened in Cracker was sometimes highly improbable, the relationships between the police were in many ways much more credible than they had been in Prime Suspect."

The "Men Should Weep" storyline was originally conceived as a plot for Prime Suspect, in which the series' protagonist, Jane Tennison, was raped.[5]

In 1997 a short spoof episode, Prime Cracker, was produced for the BBC's biennial Red Nose Day charity telethon in aid of Comic Relief. A crossover with ITV stablemate crime drama Prime Suspect, the spoof starred Coltrane and Prime Suspect lead Helen Mirren as their characters from the respective series, sending up both shows.

In 1997 a 16-part US version of Cracker — directed by Stephen Cragg and Michael Fields — was made, starring Robert Pastorelli in Coltrane's role. The original UK story lines were transferred to Los Angeles. The series finished after the first season, and was regarded by critics as a poor copy of the original. It was said that the storylines failed to translate well into an American version. Nevertheless, it was broadcast in the UK, retitled Fitz.