Longsight is an area of Manchester, England, about 3 miles (4.8 km) south of the city centre. Its population is about 16,000.

Longsight has been known over the past for its gang related violence, similar to that of nearby Moss Side.[1] Most of the violence came from tensions between 2 gangs; The Longsight Crew and their rivals, The Gooch Close Gang from nearby Moss Side. Both gangs fought turf wars between each other since late 90s, which resulted in many shootings and several deaths.

Longsight has been in the parliamentary constituency of Manchester Gorton since boundary changes in 1983. Since then, Gorton has been represented in the House of Commons by the Labour MP, the Rt Hon Sir Gerald Kaufman. At the 2005 General Election, Labour won a majority of 5,808 with 53.2% of the vote. The Liberal Democrats came second with 33.2% of the vote, and the Conservatives third with 9.8%.

The area is represented on Manchester City Council by Liberal Democrat Liaqat Ali, first elected in 2003, Abid Chohan elected in 2004 and Labour's Maryam Khan[2] elected in May 2006. 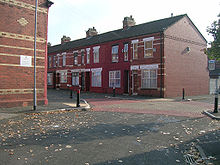 Previously known as Grindlow Marsh, it was incorporated into the City of Manchester in 1890. The district is bordered by Ardwick to the north, Rusholme to the west, Levenshulme to the south, and Gorton to the east. Longsight is currently defined by Hyde Road, Grey Street, Stockport Road, Plymouth Grove, Richmond Grove, Hathersage Road, Anson Road, Dickenson Road, Beresford Road, Old Hall Lane, Stockport Road, East Road, Pink Bank Lane, Nutsford Vale, Buckley Road and Mount Road. The Old Roman Road to Buxton (the A6 or Stockport Road) roughly bisects the area.

Longsight has a very ethnically diverse population.[3] According to the 2001 UK census, 52.7% of the population is from non-white ethnic groups. This includes 36.1% who describe themselves as Asian or Asian British (including 24.6% Pakistani, 7.2% Bangladeshi), and 9.1% Black or Black British. Many of the white people are of Irish descent and the current Irish population stands at 4.3% of the local population - slightly higher than the Manchester average of 3.8%. The largest religious groups are Christian (38.6%) and Muslim (34.7%), with 23.6% of the population not stating a religion.[4] The Census tended to underestimate immigrant communities,[5] and it is likely that these groups in Longsight were underestimated are now proportionately larger. There is still inward immigration and there is now a substantial West African community in the area. There are a number of churches in the area, a large Pakistani community centre, and a Jain temple.

The religious affiliation of Longsight residents is one-third Muslim and around one-third Christian. The area is home to a number of mosques plus several other churches of varying denomination, including the Russian Orthodox Church of the Pokrov, Saint Agnes' Church, Bethshan International Church and Saint Robert's Church.

The main shopping centre is near the corner of Stockport Road and Dickenson Road, and contains a library and supermarket as well as many smaller shops. The Longsight Market, one of the busiest markets in the North West of England[citation needed], is located on Dickenson Road. It can be easily spotted by its brightly-coloured profiled roofs. The market hosts a general market every Wednesday, Friday and Saturday and a second-hand market every Tuesday. There are a large number of takeaway food shops and restaurants and a very wide variety of fresh fruit and vegetables and other supplies to cater for the interests of the various immigrant communities in the area. 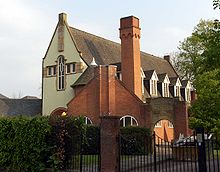 The area of Longsight contains many of the notable buildings of Victoria Park. Daisy Bank Road is a particularly good example, featuring Edgar Wood's Grade I listed First Church of Christ, Scientist and the Edwardian art nouveau Chadlington House, as well as the residences of Charles Hallé and Emmeline Pankhurst. Pankhurst's family house is also situated on the edge of Longsight at Plymouth Grove.

Larger Victorian period properties are predominantly clustered around the leafy western parts of Longsight, an area informally known as Westpoint.[7] Some Victorian villas can also be found overlooking Crowcroft park in the most southern part of Longsight.

The architectural view of new Longsight library building is nice. It is situated on the Stockport road near the main market of Longsight.

The Apollo Theater, Longsight Market, Crowcroft Park and new Longsight Library are the important places in the Longsight area.

Train: The railway line from Manchester to Stockport passes through the area, though Longsight station closed in 1958. The nearest stations are now at Ardwick and Levenshulme. Longsight is the site of Longsight Electric TMD and Longsight Diesel TMD which service trains for Virgin Trains, Northern Rail and TransPennine Express. A plan to house Eurostar trains at Manchester International Depot was abandoned.

The earliest railway works was set up in 1842 by the Manchester and Birmingham Railway (M&BR). Little is known about its early history, except that it produced fifteen single wheeler passenger engines to a design by Sharp Stewart and Company. In 1846 the M&BR was amalgamated with the London and North Western Railway (LNWR) under John Ramsbottom. One 0-6-0 was produced in 1858 but then the works closed down as the LNWR transferred its operations to Crewe. The Longsight steam locomotive depot provided engines for express trains to London and elsewhere, and for local passenger trains.

The Bus: The Famous 192 ! According to the Stagecoach Group, the route is the busiest in Britain, with around 9 million passengers carried annually. The bus runs every 5–10 minutes daily until the late hours .

3 Addison Terrace, on the north side of Daisy Bank Road, Victoria Park, was the home of Charles Hallé, the founder of the Hallé Orchestra, in 1848. The pre-raphaelite artist Ford Madox Brown lived at the same address from 1883 to 1887.[8]

Ethel 'Sunny' Lowry,[9] the first British woman to swim the English Channel, was born in Longsight in 1911.[10]

The Manchester United players Wes Brown and Danny Welbeck were both born in the area.[citation needed].

Keith Bennett, one of the Moors Murders victims, was from Longsight. He was 12 years old when he disappeared on his way from his house to that of his grandmother on 16 June 1964. His disappearance was reported to police the following morning, but in spite of endless police searches he was not found. 22 years later, in 1986, Moors Murderers Ian Brady (who also lived in Longsight) and Myra Hindley revealed that he was one of their victims; just as police had suspected when arresting them for three other murders in 1965. Despite numerous searches for his body on Saddleworth Moor, it has yet to be found.

Longsight was immortalised in song by local singer Ian Brown formerly of The Stone Roses on his album Solarized. The song was titled 'Longsight M13' reflecting the postcode of the area, which begins with M13. Graffiti appeared locally saying 'Stone Roses RIP' when the band split up, and 'Free Ian Brown' when he was jailed.[11] The song was written with Brown's former bandmate, guitarist Aziz Ibrahim, who still lives in Longsight.[12] Brown also mentions the area in The Stone Roses song "Daybreak" which contains the line "From Atlanta, Georgia, to Longsight, Manchester". In recent times[when?] Longsight has suffered like surrounding south inner-city areas, with gangs, drugs and high-profile shootings.