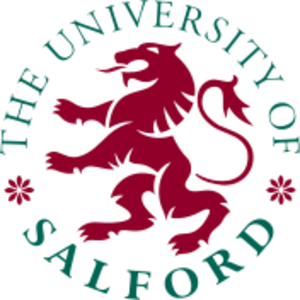 The University of Salford is a based in , , with approximately 20,000 registered students. The main campus is about 1.5 miles north of , adjacent to the National Working Class Movement Library and situated in 60 acres of parkland, "a haven of lawns and shrubberies", [citeweb|url=http://www.timesonline.co.uk/tol/life_and_style/education/good_university_guide/article2166708.ece | title=Profile: University of Salford | publisher=The Times | accessdate=2008-02-11] on the banks of the .

The University was founded in 1896 as the Royal Technical Institute, Salford following a merger of the Salford Working Men's College and Pendleton Mechanics Institute to form the Salford Technical Institute. The Institute received royal letters, allowing the word 'Royal' to be appended, with the then Duke and Duchess of York (later to become King George V and Queen Mary) officiated at the opening ceremony.

At the turn of the century, mechanical engineering, chemical works, textiles and construction dominated the industrial scene in and led the choice of subjects on offer. Initially, students became part of one of nine departments: , , , & Applied Physics, , Dyeing, Spinning & Weaving, Domestic, and . 1,240 students registered for the first session, and there were only 19 members of staff.

In 1921 the Institute was renamed the Royal Technical College, Salford, but in 1958 the institution split into two separate organisations. The break away college became the Peel Park Technical College but changed its name first to Salford Technical Institute in 1961, then to Salford College of Technology in 1970, and finally to University College Salford in 1992.

In 1963, the Government completed an inquiry into the state of in the and produced a report known as the Robbins Committee Report. It was this that paved the way for the Royal College of Advanced Technology (along with a number of other Colleges of Advanced Technology) to assume university status by Royal Charter.

The University is organised into four faculties, each of which is sub-divided into schools:

The University has established a successful global presence, with some 3,000 international students choosing to study there with significant numbers coming from , , , , , , Ireland and . With its four faculties, twelve schools, thirteen research institutes, nearly 20,000 students, and over 2,500 staff, Salford had a turnover of some £156m in 2006/07 and has placed itself strongly in serving the needs of industry and commerce.The University of Salford is on the leading edge of research innovation in many fields, including virtual reality, magnetics and optics, genetic algorithms, building design and prosthetics.

The University is also a founding member of the Northern Consortium.

The University is the self-styled university of 'limitless possibilities', and has given equal priority to enterprise alongside teaching and research for the past decade. Its commitment to making learning relevant to the outside world has contributed to the University being ranked in the top ten (out of all UK universities) for teaching excellence and top in the North West by a report in the journal "Quality in Higher Education". According to the "", Salford "averaged 21 points out of 24 from 1996 onwards" on teaching quality grades, "with perfect scores for politics and biological sciences.". [cite web | url=http://www.timesonline.co.uk/tol/life_and_style/education/good_university_guide/article2166708.ece | title=Profile: University of Salford | publisher=The Times | accessdate=2008-02-11]

The main Peel Park campus is less than 1.5 miles (2.4 kilometres) from Manchester City Centre on the banks of the , adjacent to Peel Park, which first opened on is said to be possibly the first public park in the world. [ [http://www.salford.gov.uk/leisure/parks/parksinsalford/publicparks/parks-bb.htm City of Salford's Parks.] Date of page creation:6 August, 2007. Retrieval Date: 1 October, 2007.] According to the the student view of Salford is that it is "a relaxed campus close to Manchester, but cheaper and greener." [ [http://www.timesonline.co.uk/tol/life_and_style/education/sunday_times_university_guide/article2505569.ece The Times Online, Review of the University of Salford.] Date of page creation:21 September, 2007. Retrieval Date: 1 November, 2007.] There is also a mainline railway station on the Campus, . In addition, there are a number of other university facilities located within a mile of the main campus, namely the Frederick Road Campus, Adelphi Campus and Irwell Valley campus.

The University has embarked on a £150 million programme of investment, to deliver new buildings and carry out major refurbishment projects. These include:
* £22m Mary Seacole Building the purpose-built five storey facility for the Faculty of Health & Social Care.
* £10m Lady Hale Building for the Salford Law School. The whole building acts as its own night storage heating and cooling system thanks to a "Termodeck" system.
* £10m Innovation Forum Building
* Joule Physics Teaching Laboratory provides a purpose-built single laboratory space.
* Due to be completed in 2011 - A new building for the University's Faculty of Arts, Media & Social Sciences on the site in - which will be home to five departments and some of the world’s biggest companies in broadcasting and new media.
* Significant investment in IT facilities, with the setting up of wireless networks in many buildings across campus.
* Improvements/refurbishment of facilities for the Faculty of Science, Engineering & Environment.

With seating for nearly 400 people, Peel Hall hosts many musical performances and is the main venue for the Midday Recitals. The hall is housed in the Peel Building, a red brick and terracotta Victorian building located on the Peel Park Campus.

Situated at the front of Peel Park Campus the Maxwell Building plays host to concerts and recitals. The building contains an upper hall and a lower hall which together can seat up to 1200.

Situated in the heart of the Peel Park campus, the Chapman Gallery hosts a wide range of modern and contemporary art exhibitions which showcase the work of up and coming artists, University staff, students and the community of Salford.

The Adelphi Studio Theatre is a small theatre venue based in the school of Music, Media and Performances Adelphi Building.

Eddie Colman and John Lester CourtsThese two blocks of flats contain 755 rooms in total, and each flat is shared between two, three or four people. The flats are the closest accommodation to Salford Shopping City in Pendleton – colloquially referred to as 'the Precinct'.

Horlock and Constantine CourtsConstantine Court is the only "en suite" University-owned accommodation, consisting of 80 rooms in seven houses. This accommodation is located in the centre of the main university campus, and is situated close to the Student Union shop, a bank and . Adjacent Horlock Court comprises 168 rooms in 14 houses. Bramall and Matthias CourtsThese flats are located close to the Adelphi campus. Bramall is typically occupied by undergraduates, whereas Matthias tends to be postgraduates. Matthias flats are usually shared between two or three people, and Bramall flats are shared between two, three or four.

Castle Irwell Student VillageThe student village is the largest area of accommodation, housing up to 1600 students, and is situated on the site of the old . At the centre of the site is the SU bar and nightclub, the Pavilion (or 'Pav'). There are both houses (shared between 10-12 people) and flats (six people). Castle Irwell is a popular choice for first years, due to the cheap rent and the Pav's three bars, dance floors, pool tables and large sports plasma screens. There are also grass rugby and football pitches and several floodlit pitches used in society meetings and Varsity Rags.

This accommodation is the furthest from the main university campus but is served by a free university bus, running every half an hour. A taxi rank is situated outside Castle Irwell, and it is near to various amenities in Lower Broughton, including takeaways and local shops.

Seaford RoadThis is the newest accommodation site, consisting of a square of houses around a central reception, lounge and laundry building. Each house contains six flats, which are typically shared by six people with en suite bathrooms. The site also has 'deluxe' rooms available for an extra cost. This accommodation is very close to Castle Irwell. The site includes a purpose built , Subway, and two takeaways. The halls are also served by the free university bus.

University House on the Peel Park Campus is home to the University of Salford Students' Union (USSU). As well as representing students, the union plays host to a number of services, shops and bars (including a nightclub and live music venue) and offers its own gym and swimming pool for student and staff use.

Some of its commercial activities are:

*Shops. Sited on each campus is a student shop, the largest being on the Peel Park campus (next to which is a bank and bookstore).
*Print shops. Sited within University House and the Allerton building, they offer an assortment of print services.
*Café/Bar Yours. Located in University House, "Yours" comprises a coffee shop and cafe, lounge bar and sports bar. The coffee shop and cafe form an alcohol-free space and serves an array of food and drinks from breakfast until early evening.
*The Pav. Located on Castle Irwell Student Village, it is a favourite haunt of many residents of the student village. The Pav also hosts two club nights each week, with extended opening hours, themed nights and DJ sets such as

* Student DirectThe official student newspaper of the Students' Union is believed to be one of the widest-circulating student publications in Europe. It serves the University of Salford, the and the . The University of Salford edition aims to represent the views and interests of students and communicate the work of the Union, as well as informing members about local, national and international issues that affect them as students. It differs from the Manchester edition in 12 pages (including the covers, inside front cover and various opt-out pages throughout). A large team of volunteers writes the paper with the editorship being held by the SU's Vice-President Communications who is elected annually. The current VP Communications/Editor is Vickie Scullard.

* Shock RadioThe union also has a student radio society called Shock Radio. [http://www.shockradio.co.uk] It was formed in 2000 following the break-up of Storm FM (a joint project between the Manchester Metropolitan University and the Universities of Manchester and Salford). The first broadcast was in 2002 under an FM (valid for 28 days); the sixth broadcast took place successfully in November 2007, with the seventh planned for November 2008. The station also produces podcasts throughout the year, which are available for anyone to download via the website.

The union clubs participate in many competitions, mostly within the BUSA organised leagues. The clubs within the union are:

In addition to the Clubs, there is a large society base within the union, comprising activities, political groups, religious groups and other interest groups. They are:

The Two Cities Boat Race is an annual boat race which has been running since 1972. It is now an established event in the sporting and social calendar of Salford and Manchester. The event is also significant for the amount of work put in by volunteers from both universities, to help with event set-up, stewarding, and programme selling, raising money for many different charities. In 2007 the recipient of the proceeds was , a charity which supports medical research for children.