The Dickcissel (Spiza americana) is a small American seed-eating bird in the family Cardinalidae. It is the only member of the genus Spiza, though some sources list another supposedly extinct species (see below). In older works, it is often placed with the American sparrows in the Emberizidae; females especially resemble American sparrows in plumage. 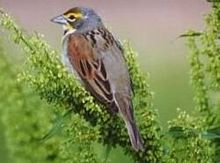 Dickcissels have a large pale bill, a yellow line over the eye, brownish upperparts with black streaks on the back, dark wings, a rust patch on the shoulder and light underparts. Adult males have a black throat patch, a yellow breast and grey cheeks and crown. This head and breast pattern is especially brilliant in the breeding plumage, making it resemble an Eastern Meadowlark. Females and juveniles are brownish on the cheeks and crown and are somewhat similar in appearance to House Sparrows; they have streaked flanks.

In flight they make a low, "electric", buzzing fpppt. From an open perch in a field, this bird's song is a sharp dick dick followed by a buzzed cissel, also transcribed as skee-dlees chis chis chis or dick dick ciss ciss ciss.[1]

The Dickcissel is part of a group of Cardinalidae that apparently also includes Amaurospiza, Cyanocompsa, Cyanoloxia and Passerina. Spiza is the only one among these that lacks blue structural colors in its plumage. The scientific name means simply "American finch"; spiza is the Ancient Greek catch-all term for finch-like birds. Many bird genera contain the term spiza, but none of these were generally held to be a really close relative of Spiza itself. Amusingly, Amaurospiza seems to have turned out to be one of the closest living relatives of the Dickcissel after all.

Though the color pattern and habits of the Dickcissel make it stand apart from other Cardinalidae, its robust cone-shaped bill - stouter than in American sparrows or true finches which it somewhat resembles at first glance - gives away its relationships. 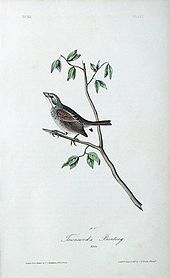 A problematic specimen is often discussed under the name of Spiza townsendi (or Spiza townsendii, the original misspelt specific name proposed by John James Audubon). This individual was collected on May 11, 1833, by Audubon's colleague John Kirk Townsend in New Garden Township, Chester County, Pennsylvania. The specimen remains unique and nothing is known about what it represents with certainty; it has thus even been suggested to be an extinct relative.

It is commonly called "Townsend's Dickcissel" (or "Townsend's Bunting", "Townsend's Finch"[2]) in reference to the collector whom the scientific name honors. Rather than a distinct species or subspecies, it is (as certainly as this can be said in absence of direct proof) a color variant. Comparing the birds, it is immediately obvious that the yellow lipochrome pigments are entirely absent in "Townsend's Dickcissel". The specimen has foxed today, giving it an altogether beige hue, but when originally shot, the olive areas of the head were grey as the cheeks, and the yellow and buff on face and underside was pure white. The brown wings and tail were rufous, due to the pheomelanins not being tinged by lipochromes.

Thus, this bird is very likely certainly the result of a simple genetic change, perhaps just a single point mutation, affecting some part of the carotinoid metabolism - essentially the same thing that happens in albinism but in a different metabolic pathway. Though the bird seemed to be healthy and had survived to maturity when it found its untimely end through Townsend's gun, no other such specimens have been documented before, nor ever since. Albinism and other pigment aberrations are not infrequently seen in birds, and the lack of further specimens is somewhat puzzling in that respect.

No specific details are known about the Dickcissel's lipochrome metabolism; it may be that it happens to be more fine-tuned than in other birds, so that most mutations therein will be lethal and Audubon's bird was simply one of the very few individuals that survived. It stands to note that in wild birds, varying from species to species some color aberrations are less frequently seen than others, and that in captive birds such as canaries, some color mutations have only arisen a handful of times at most during several centuries of dedicated breeding and screening for novel color variants (see also Budgerigar colour genetics). While only a complete molecular biological study of the Dickcissel's metabolism and the specimen's ancient DNA stands any reasonable chance to resolve the question with certainty, the hypothesis of an extremely uncommon color mutation is plausible, and such phenomena certainly occur in other Passeroidea.

Alternatively, the bird was considered a hybrid, but the present state of knowledge of the Dickcissel's relations makes this not very plausible - there are a number of species with which Spiza could conceivably produce hybrids - such as Passerella -, but the lack of even the slightest hint of blue structural colors in Townsend's specimen and it moreover being not different from a Dickcissel in habitus makes the hybrid theory suspect. Regardless, Townsend noted observed the bird making vocalizations reminiscent more of an Indigo Bunting (Passerina cyanea), and by comparing mitochondrial and nuclear DNA sequences of the specimen with those of the Dickcissel, the Indigo Bunting, and perhaps other Passerina, the hybridization hypothesis should be far more easy to prove or reject than a color aberration. On the other hand, there is not enough known on whether Dickcissels pick up their characteristic vocalizations from conspecific males or whether they are innate, and thus no firm conclusion regarding Townsend's observations is presently possible.

The notion that "Townsend's Dickcissel" represents an extinct species appears entirely without merit. Hybridization e.g. in Passerina is well documented to occur often, and the hybrids are often fertile to some extent. As the capability to produce intergeneric hybrids is almost always the same among closely related bird genera, there is nothing to indicate that the Dickcissel and a hypothetical congener would not have been able to produce fertile hybrid males at least (see Haldane's Rule). Considering that, and the time and place where Townsend got his specimen - at a popular stopover region for Dickcissels returning from their South American winter quarters, and right at the time when the species is present in this region - it is hardly conceivable how "Townsend's Dickcissel" should have been, as has been suggested, "the very last remnant of a now extinct species".

That a closely related congener of Spiza americana, with which it almost certainly would have hybridized to some extent as well as shared at least a migration route and habitat, possibly even the breeding range, would even have evolved in the first place almost beggars belief. Though there are numerous sister species of songbirds occurring west and east of the Appalachian Mountains for example, these do not differ in such a striking but easily explained way. Rather, their differences are usually more subtle but deep-rooted, for example vocalizations or details of the color pattern.[3] Of course, it must be said to Audubon's credit that at his time neither theories of evolution nor of biogeography or phylogeny were accepted, and so his error is excusable. This cannot be held in favor of those 20th century writers who still claimed "Townsend's Dickcissel" to be a recently-extinct species.

Their breeding habitat is fields in midwestern North America. They migrate in large flocks to southern Mexico, Central America, and northern South America. They may occur as vagrants well outside of their normal range.

Dickcissels forage on the ground or in fields. They mainly eat insects and seeds. Outside of the nesting season, they usually feed in flocks. They are considered a pest by farmers in some regions because flocks can consume large quantities of cultivated grains.

The birds migrate to their breeding range rather late, with the first arriving only in May, with most birds only arriving in early June.[4] They nest near the ground in dense grasses or small shrubs, or up to 3–4 ft (90–120 cm) high in bushes and trees. Males may have up to six mates, with most attracting only one or two, and several failing to attract any mates at all. Yet if such "bachelors" survive until next summer, they will get another try to attract females, as the partners only stay together for raising one brood. Dickcissels are thus among the few songbirds that are truly polygynous. When they leave for winter quarters by early August or so,[5] what little pair bond existed during the summer is broken up.

Dickcissel populations frequently fluctuate in numbers, even to the extent that their range changes notably. In the early 19th century, Dickcissels expanded eastward, establishing a population in New England and the mid-Atlantic states that disappeared around the end of the century. Both appearance and disappearance were probably related to changes in land use.[6]

A Dickcissel known as Yelling Bird appears in the popular webcomic by Jeph Jacques, Questionable Content. He was originally a character in the side project IndieTits, but has in more recent times been used in filler strips over holidays and in unforeseen circumstances which prevent the author from creating a usual full strip.