Domestic Canary
This article is about the pet variety of the bird. For the wild bird that inhabits islands off western Europe, see Atlantic Canary. 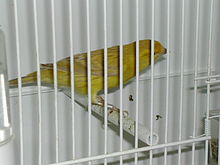 The Domestic Canary, often simply known as the canary, (Serinus canaria domestica) is a domesticated form of the wild Canary, a small songbird in the finch family originating from the Macaronesian Islands (Azores, Madeira and Canary Islands).

Canaries were first bred in captivity in the 17th century. They were brought over by Spanish sailors to Europe. Monks started breeding them and only sold the males (which sing). This kept the birds in short supply and drove the price up. Eventually Italians obtained hens and were able to breed the birds themselves. This made them very popular and resulted in many breeds arising and the birds being bred all over Europe.

The same occurred in England. First the birds were only owned by the rich but eventually the local citizens started to breed them and, again, they became very popular. Many breeds arose through selective breeding, and they are still very popular today for their voice.

Canaries are named after the Canary Islands, in Spain. However, the real etymology of the Canary Islands do not actually mean the "Islands of Canaries", deriving from Latin Insula Canaria (first referring just to Gran Canaria), with the meaning of "Island of Dogs" because it contained "vast multitudes of dogs of very large size". 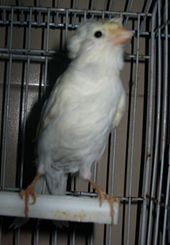 While wild canaries are a greenish color, domestic canaries have been selectively bred for a wide variety of colors, such as yellow, orange, brown, black, white, and red. (The color red was introduced to the domesticated canary through hybridisation with the red siskin, a type of South American finch.[1])

Canaries are judged in competitions following the annual molt in the summer.[2] This means that in the northern hemisphere the show season generally begins in October or November and runs through December or January. Birds can only be shown by the person who raised them. A show bird must have a unique band on its leg indicating the year of birth, the band number, and the club to which the breeder belongs.

There are many canary shows all over the world. The world show (C.O.M.) is held in Europe each year and attracts thousands of breeders. As many as 20,000 birds are brought together for this competition.

Canaries were once regularly used in coal mining as an early warning system.[3] Toxic gases such as carbon monoxide and carbon dioxide in the mine would kill the bird before affecting the miners. Because canaries tend to sing much of the time, they would stop singing prior to succumbing to the gas therefore alerting miners to the danger. The use of so called miner's canaries in British mines was phased out in 1987.[4]

Hence, the phrase "canary in a coal mine" is frequently used to refer to a person or thing which serves as an early warning of a coming crisis. By analogy, the term climate canary is used to refer to a species that is affected by an environmental danger prior to other species, thus serving as an early warning system for the other species with regard to the danger.[5] 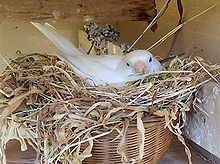 Canaries have been extensively used in research to study neurogenesis, or the birth of new neurons in the adult brain, and also for basic research in order to understand how songbirds encode and produce song. Thus, canaries have served as model species for discovering how the vertebrate brain learns, consolidates memories, and recalls coordinated motor movements. Fernando Nottebohm, a professor at the Rockefeller University in New York City, New York, detailed the brain structures and pathways that are involved in the production of bird song.

Inexperienced breeders find it difficult to determine the sex of canaries by appearance, intensity of colour, or demeanor. Most males sing and most females do not. As spring approaches physical changes are observed in the vent area. The abdomen of the hen becomes more rounded and that of the cock becomes larger and protudes downward in the same direction as the legs.

Canaries are only fertile when the length of the day increases to about 12 hours. This occurs naturally in the spring but can be induced earlier through artificial lighting and heating. Good nutrition is essential. Cuttlefish bone is often used to provide calcium for the formation of egg shells. Liquid vitamin drops help guard against deficiencies. Greens are a staple, such as chickweed, seedy (lawn type) grass heads, dandelion, carrot, broccoli, Brussels sprouts, and apple. There are many recipes for soft food that include ingredients such as hard boiled egg, gelatin, bread crumbs, or biscuit crumbs. A protein-rich soft food, together with sprouted seed, is the fundamental diet of canary chicks.

Canaries are best suited to breeding in a controlled environment with one pair per cage. This is essential for any pedigree show varieties. They can also be bred successfully in an avaiary situation if there is sufficient room, excess nesting sites, and a plentiful supply of nesting material.

Males will often be ready to breed before the females. A cock may pursue a hen relentlessly or fight with her. In these situations the pair is separated until the female has most of the nest built and is more likely to accept the male. Many breeders use a "double breeder" cage with two compartments separated by a removable wire partition. The partition is removed when the pair is observed "kissing" (the male trying to feed the female) through the bars.

An open (uncovered) 4" nest cup is previously installed in an accessible position above the height of the perches. Nesting material such as hessian, plumber's hemp, cotton wool, burlap, and tissue paper is provided.

The hen lays four or five eggs, on successive days. She rarely leaves the nest during the two weeks of incubation and relies on the cock to bring food. Some breeders remove the first two or three eggs and replace them with dummy eggs. They then return the real eggs when the clutch is completed. This causes the eggs to hatch over fewer days and gives a higher survival rate due to less disparity in the size of the chicks. Fresh soft food and sprouted seed is provided regularly until the chicks are weaned to hard seed.

The chicks leave the nest at about 18 days and are fed by the parents for another week or so. The hen then commences a second round and may attack the first one. At this point the partition is returned in a "double breeder" cage so that the fledglings can be housed in one side. Their parents in the other side feed them through the wire while also proceeding with further breeding.