Ham (Hebrew: חָם, Modern H̱am Tiberian Ḥām ; Greek Χαμ , Kham ; Arabic: حام, Ḥām, "hot" or "burnt"), according to the Table of Nations in the Book of Genesis, was a son of Noah and the father of Cush, Mizraim, Phut and Canaan.[1][2] 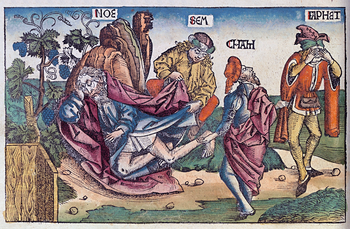 This picture from the Nuremberg Chronicle uses the spelling "Cham".

The story of Ham is related in Genesis 9:20-27, King James Version:

Genesis 5:32 states that Noah fathered Shem, Ham and Japheth after he became 500 years old, some hundred years before the flood.

20 And Noah began to be an husbandman, and he planted a vineyard: 21 And he drank of the wine, and was drunken; and he was uncovered within his tent. 22 And Ham, the father of Canaan, saw the nakedness of his father, and told his two brethren without. 23 And Shem and Japheth took a garment, and laid it upon both their shoulders, and went backward, and covered the nakedness of their father; and their faces were backward, and they saw not their father’s nakedness.

Ham was "blessed" in Genesis 9:1 - Noah did not curse him directly.

The Talmud deduces two possible explanations (attributed to Rab and Rabbi Samuel) for what Ham did to Noah to warrant the curse. (Babylonian Talmud Sanhedrin 70a.) According to Rab, Ham castrated Noah on the basis that, since Noah cursed Ham by his fourth son Canaan, Ham must have injured Noah with respect to a fourth son, by emasculating him, thus depriving Noah of the possibility of a fourth son. According to Samuel, Ham sodomized Noah, on the analogy between “and he saw” written in two places in the Bible: With regard to Ham and Noah, it says, "[22] And Ham, the father of Canaan, saw the nakedness of his father, and told his two brethren without. [23] And Shem and Japheth took a garment, and laid it upon both their shoulders, and went backward, and covered the nakedness of their father; and their faces were backward, and they saw not their father’s nakedness." (Genesis 9:20-27 – while in Genesis 34:2, it says, "And when Shechem the son of Hamor saw her (Dinah), he took her and lay with her and defiled her." According to this argument, similar abuse must have happened each time that the Bible uses the same language. The Talmud concludes that, in fact, "both indignities were perpetrated."

In more recent times, some scholars have suggested that Ham may have had intercourse with his father's wife.[3] Under this interpretation, Canaan is cursed as the "product of Ham's illicit union."[4]

This "curse of Canaan" by Noah was likely connected to the conquest of Canaan by Israel. Both the conquest of Canaan and the curse, according to the Book of Jubilees 10:29-34, are attributed, rather, to Canaan's steadfast refusal to join his elder brothers in Ham's allotment beyond the Nile, and instead "squatting" within the inheritance of Shem, on the eastern shores of the Mediterranean, in the region later promised to Abraham.

The chronological scheme of Jubilees has Ham born in the year 1209 A.M. — two years after Shem, three before Japheth, and 99 before the flood. It gives the name of his wife who also survived the flood as Na'eltama'uk. After his youngest son Canaan was cursed in 1321 A.M., he left Mount Ararat and built a city named for his wife on the south side of the mountain. In 1569 A.M., he received a third division of the earth along with his two brothers for his inheritance: everything west of the Nile River, and to the south of Gadir. In 1639 A.M. when the nations were scattered following the failure of the Tower of Babel, Ham and his children journeyed to their allotment, with the exception of Canaan, who settled in Shem's territory, thus receiving another curse.

According to the Bible, Ham was one of the sons of Noah who moved southwest into Africa and parts of the near Middle East, and was the forefather of the nations there. The Bible refers to Egypt as "the land of Ham" in (Psalms 78:51; 105:23,27; 106:22; 1Ch 4:40). The Hebrew word for Egypt was Mizraim (probably literally meaning the two lands), and was the name of one of Ham's sons. The Egyptian word for Egypt was Kemet (or Kmt), meaning "black land." Some scholars claim it was in reference to the fertile dark soil along the Nile Valley.[5][6][7] Ham could plausibly be a name derived from Khem (Egypt), or vice versa, via sound change, due to the change in language between Egyptian and Hebrew, corresponding to the well known phonological change of /k/ into /x/ (voiceless velar fricative) into /h/. The names of Ham's other children correspond to regions within Egyptian influence - Kush, Canaan, and Phut. 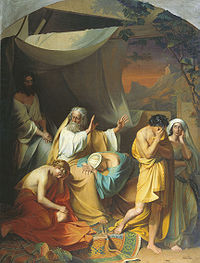 Ivan Ksenophontov. The damnation of Ham

Counter arguments are often put forward that the connection is only between the Egyptian word and the typical modern pronunciation of Hebrew ? as /x/ ("kh") rather than /ħ/ (as was the case with biblical Hebrew, and suggest that the appearance is lessened with the original Hebrew ?? Ḥam with Northwest Semitic /ħ/ (such as in Hebrew, Phoenician, and Syriac). Further, Kam, the version of the name in Ge'ez—a South Semitic language—is seemingly borrowed from Biblical Hebrew via the Hebrew Bible and perhaps does not reflect a native derivation of the word.

In the 19th century, there was an erroneous transcription of the Egyptian for Min as ĥm ("khem"), purely by coincidence. Since this Khem was worshipped most significantly in Akhmim, the separate identity of Khem was reinforced, Akhmim being understood as simply a corruption of Khem. However, Akhmim is a corruption of ?m-mnw, meaning Shrine of Min, via the demotic form šmn. The existence of a god named Khem was later understood as a faulty reading, but unfortunately it had already been enshrined in books written by E. A. Wallis Budge—now out of copyright and widely reprinted. Thus this error still finds a home among some writers, who often use it to identify Ham with the imaginary god Khem, who may also be identified with the Greek Titan Cronos. (See the article Min (god) for more details.)