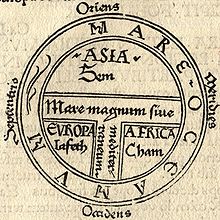 This T and O map, which abstracts that society's known world to a cross inscribed within an orb, remakes geography in the service of Christian iconography and identifies the three known continents as populated by descendants of Shem (Sem), Ham (Cham) and Japheth (yafeth)

The Seventy Nations or Sons of Noah is an extensive list of descendants of Noah appearing in Genesis 10 of the Hebrew Bible, representing an ethnology from an Iron Age Levantine perspective. The significance of Noah in this context is that, according to Genesis, the population of the Earth was completely destroyed during the Flood because of the wickedness of the inhabitants, and Noah and his family were the sole eight survivors to continue the human race. The view of history presented by the Bible is thus that all humans on Earth are descended from Noah's family. 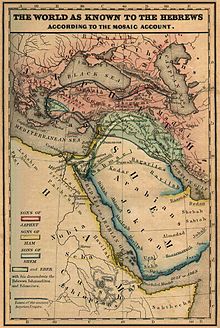 A literal interpretation of Genesis 10 suggests that the present population of the world was descended from Noah's three sons: Shem, Ham, and Japheth, and their wives. Until the mid-19th century, this was taken by many as historical fact, and still is by many Orthodox Jews, Muslims, and Christians.[citation needed]

There are disputes about how many of the peoples of the Earth this story was intended to cover, and as to its accuracy. Many Jews, Christians, and Muslims retain the belief that the table applies to the entire population of the earth, while others read it as a guide only to local ethnic groups.[citation needed]

In the Biblical view, the listed children of Japheth, Shem and Ham correspond to various historic nations and peoples. In the typical interpretation, these sons of Noah correspond to three races: European, Semitic, and African. Alternate divisions claim Euro-Asian Japhet, Semitic Shem, and Afro-Asian Ham.[citation needed] 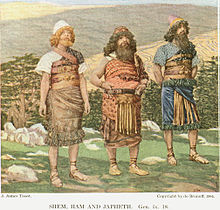 According to Genesis 10, Noah had three sons:

It then proceeds to detail their descendants. The identification of several of the first generation is aided by the inclusion of the second, although several of their identifications are less certain. (The copy of the table in the biblical book of 1 Chronicles chapter 1 has occasional variations in the second generation, most likely caused by the similarity of Hebrew letters such as Resh and Daleth). Forms ending in -im are plurals, probably indicating names of peoples, and not intended as the name of a single person.

Note: the Greek Septuagint (LXX) of Genesis includes an additional son of Japheth, "Elisa", in between Javan and Tubal; however, as this name is found in no other ancient source, nor in I Chronicles, he is almost universally agreed to be a duplicate of Elisha, son of Javan. Nevertheless, the presence of Elisa (as well as that of Cainan son of Arpachshad, below) in the Greek Bible accounts for the traditional enumeration among early Christian sources of 72 families and languages, from the 72 names in this chapter, as opposed to the 70 names, families and languages usually found in Jewish sources.[citation needed]

Japheth is traditionally seen as the ancestor of Europeans, as well as some more eastern nations; thus Japhetic has been used as a synonym for Caucasians. Caucasian itself derives in part from the assumption that the tribe of Japheth developed its distinctive racial characteristics in the Caucasus, where Mount Ararat is located. The term Japhetic was also applied by the early linguists (brothers Grimm, William Jones, Rasmus C. Rask and others) to what later became known as the Indo-European language group, on the assumption that, if descended from Japheth, the principal languages of Europe would have a common origin, which apart from Uralic, Kartvelian, Pontic, Dagestanian, and Basque, appears to be the case. In a conflicting sense, the term was also used by the Soviet linguist Nikolai Marr in his Japhetic theory intended to demonstrate that the languages of the Caucasus formed part of a once-widespread pre-Indo-European language group.[citation needed]

Africans were thus anciently understood to be the sons of Ham, particularly his descendant Cush, as Cushites are referred to throughout scripture as being the inhabitants of East Africa, and they and the Yoruba still trace their ancestry through Ham today. Beginning in the 9th century with the Jewish grammarian Judah ibn Quraysh, a relationship between the Semitic and Cushitic languages was seen; modern linguists group these two families, along with the Egyptian, Berber, Chadic, and Omotic language groups into the larger Afro-Asiatic language family. In addition, languages in the southern half of Africa are now seen as belonging to several distinct families independent of the Afro-Asiatic group. Some now discarded Hamitic theories have become viewed as racist; in particular a theory proposed in the 19th century by Speke, that the Tutsi were supposedly Hamitic and thus inherently superior.[citation needed]

The 17th-century Jesuit, Athanasius Kircher, thought that the Chinese had also descended from Ham, via Egyptians.[4]

Shem is traditionally held to be the ancestor of the Semitic people; Religious Jews and Arabs consider themselves sons of Shem through Arpachshad (thus, Semites).

In the view of some 17th century European scholars (e.g., John Webb), the people of China and India descended from him as well.[4]

Arpachshad's family (genealogy of Abraham) and the Line of Joktan

The genealogy at this point lists several generations of Arpachshad's descendants, on account of their connection with the Hebrew nation and the rest of Genesis: 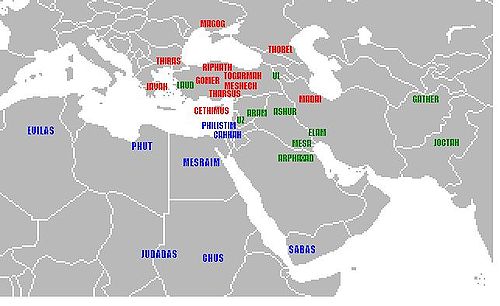 The first century Jewish-Roman historian Flavius Josephus, in Antiquities of the Jews Book 1, chapter 6, was among the first of many who attempted to assign known ethnicities to some of the names listed in Genesis chapter 10. His assignments became the basis for most later authors, and were as follows[12]:

The chronicle of Hippolytus of Rome (c. 234), existing in numerous Latin and Greek copies,[13] make another attempt to assign ethnicities to the names in Genesis 10, in some cases similar to those of Josephus, but with many differences, which are:

The Chronicle of 354, the Panarion by Epiphanius of Salamis (c. 375), the Chronicon Paschale (c. 627), the History of Albania by the Georgian historian Movses Kaghankatvatsi (7th century), and the Synopsis of Histories by John Skylitzes (c. 1057) follow the identifications of Hippolytus.

Jerome, writing ca. 390, provided an 'updated' version of Josephus' identifications in his Hebrew Questions on Genesis. His list is substantially identical to that of Josephus in almost all respects, but with the following notable differences:

In Isidore of Seville and later authors

The scholar Isidore of Seville, in his Etymologiae (ca. 600), repeats all of Jerome's identifications, but with these minor changes [14]:

Isidore's identifications for Japheth's sons were repeated in the Historia Britonum attributed to Nennius. Isidore's identifications also became the basis for numerous later mediaeval scholars, remaining so until the Age of Discovery prompted newer theories, such as that of Benito Arias Montano (1571), who proposed connecting Meshech with Moscow, and Ophir with Peru.

Shem as the Father of the Far East

The Emperor Yao, whom the Figurist Jesuits thought to be the image of Noah on the traditional Chinese history

In the view of some 17th century European scholars (e.g., John Webb), the people of China and India descended from Shem.[4] Both Webb and the French Jesuits belonging to the Figurist school (late 17th-early 18th century) went even further, identifying the legendary Emperor Yao of Chinese history with Noah himself.[4]

There exist various traditions in post-biblical sources claiming that Noah had children other than Shem, Ham, and Japheth — born variously before, during, or after the Deluge.

According to the Quran (Hud v. 42–43), Noah had another unnamed son who refused to come aboard the Ark, instead preferring to climb a mountain, where he drowned. Some later Islamic commentators give his name as either Yam or Kan'an.[15]

According to Irish mythology, as found in the Annals of the Four Masters and elsewhere, Noah had another son named Bith, who was not allowed aboard the Ark, and who attempted to colonise Ireland with 54 persons, only to be wiped out in the Deluge.

An early Arabic work known as Kitab al-Magall or the Book of Rolls (part of Clementine literature) mentions Bouniter, the fourth son of Noah, born after the flood, who allegedly invented astronomy and instructed Nimrod.[16] Variants of this story with often similar names for Noah's fourth son are also found in the ca. 5th century Ge'ez work Conflict of Adam and Eve with Satan (Barvin), the ca. 6th century Syriac book Cave of Treasures (Yonton), the 7th century Apocalypse of Pseudo-Methodius (Ionitus[17]), the Syriac Book of the Bee 1221 (Yônatôn), the Hebrew Chronicles of Jerahmeel, ca. 12th–14th cent. (Jonithes), and throughout Armenian apocryphal literature, where he is usually referred to as Maniton; as well as in works by Petrus Comestor c. 1160 (Jonithus), Godfrey of Viterbo 1185 (Ihonitus), Michael the Syrian 1196 (Maniton), Abu Salih the Armenian c. 1208 (Abu Naiţur); Jacob van Maerlant c. 1270 (Jonitus), and Abraham Zacuto 1504 (Yoniko).

Martin of Opava (c. 1250), later versions of the Mirabilia Urbis Romae, and the Chronicon Bohemorum of Giovanni di Marignola (1355) make Janus (i.e., the Roman deity) the fourth son of Noah, who moved to Italy, invented astrology, and instructed Nimrod.

According to the monk Annio da Viterbo (1498), the Hellenistic Babylonian writer Berossus had mentioned 30 children born to Noah after the Deluge, including sons named Tuiscon, Prometheus, Iapetus, Macrus, "16 titans", Cranus, Granaus, Oceanus, and Tipheus. Also mentioned are daughters of Noah named Araxa "the Great", Regina, Pandora, Crana, and Thetis. However, Annio's manuscript is widely regarded today as having been a forgery.[18]