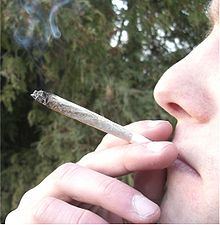 Cannabis smoking involves inhaling vapors released by heating the flowers and subtending leaves of the Cannabis plants, known as marijuana. Alternatively, the cannabis plant flowers may be finely sifted producing kief, a powder especially rich in the oil-glands or trichomes which contain the highest amounts of cannabinoids. In exporting countries the kief is usually pressed under heat to form solid cakes of hashish, easily stored and shipped, which is widely marketed for smoking use. Cannabis is consumed recreationally to produce a feeling of relaxation or euphoria, medically (such as to relieve stress or suppress nausea), or inspirationally by inventors and artists in pursuit of creativity.

Smoking releases the main psychoactive chemical in cannabis, Δ9-tetrahydrocannabinol (THC), which is absorbed into the bloodstream via the lungs. It then mostly targets the brain, where it binds to cannabinoid receptors. The immune system also contains cannabinoid receptors and may modulate its function.[1] The cannabinoid receptors receive the THC and other cannabinoids, leading to the feeling of a mental "high," which varies strongly by person. Studies have also found that the heating of cannabis (which can be achieved without the health hazards of combustion by means of a vaporizer) results in the production of additional THC from the decarboxylation of the non-psychoactive Δ9-tetrahydrocanabinoid acid (THCa).[2]

While cannabis can be consumed orally, the bioavailability characteristics and effects of this method are different from smoking. The effect takes longer to begin, is typically longer-lasting, and can result in a more powerful psychoactive effect than expected.[3]

Cannabis can be smoked in a variety of pipe-like implements including bongs and "bowls", joint, or blunt.[4] 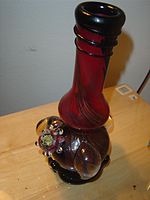 A bong, is similar to a pipe, only it has a water-chamber [6] through which cannabis smoke passes prior to inhalation and a wide "mouth" typically around 1.5-2 inches in diameter. Users fill the bong with water in order to cool the smoke and filter out particulate matter, sometimes also adding ice, cough drops or using substances such as brandy in place of water.

Joint is a slang term for a cigarette rolled using cannabis. Rolling papers are the most common rolling medium among industrialized countries, however brown paper, cigarettes with the tobacco removed, and newspaper are commonly used in the third world.[7] Modern papers are now made from a wide variety of materials including rice, hemp, and flax.[8] A joint can range in size, typically containing between 250–750 mg net weight of cannabis and/or fillers.[9]

A major 2006 study compared the effects of tobacco and Cannabis smoke on the lungs.[11][12] The outcome of the study showed that even very heavy cannabis smokers "do not appear to be at increased risk of developing lung cancer,"[12] while the same study showed a twenty-fold increase in lung cancer risk for tobacco smokers who smoked two or more packs of tobacco cigarettes a day.[11][12] It is known that Cannabis smoke, like all smoke, contains carcinogens and thus has a probability of triggering lung cancer, but THC, unlike nicotine, is thought to "encourage aging cells to die earlier and therefore be less likely to undergo cancerous transformation."[12] Cannabidiol (CBD), an isomer of THC and another major cannabinoid that is also present in cannabis, also has been reported elsewhere to have anti-tumor properties.[13]