In certain countries (e.g. Indonesia and Singapore) importing, exporting or even possession of illegal drugs is punishable by death.

There have been issues about having the death penalty for drug trafficking, including being framed with someone else putting drugs into another's luggage at airports. This can be a concern to people as not to leave luggage unattended. 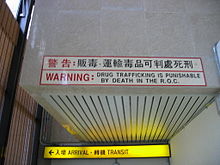 A sign at the Taiwan Taoyuan International Airport warns arriving travelers that drug trafficking is a capital offense in the Republic of China.

The Singapore embarkation card contains a warning to visitors about the death penalty for drug trafficking under the Misuse of Drugs Act. Warning signs can also be found at the Johor-Singapore Causeway and other border entries.

Methods of Execution by Country - NutzWorld.com