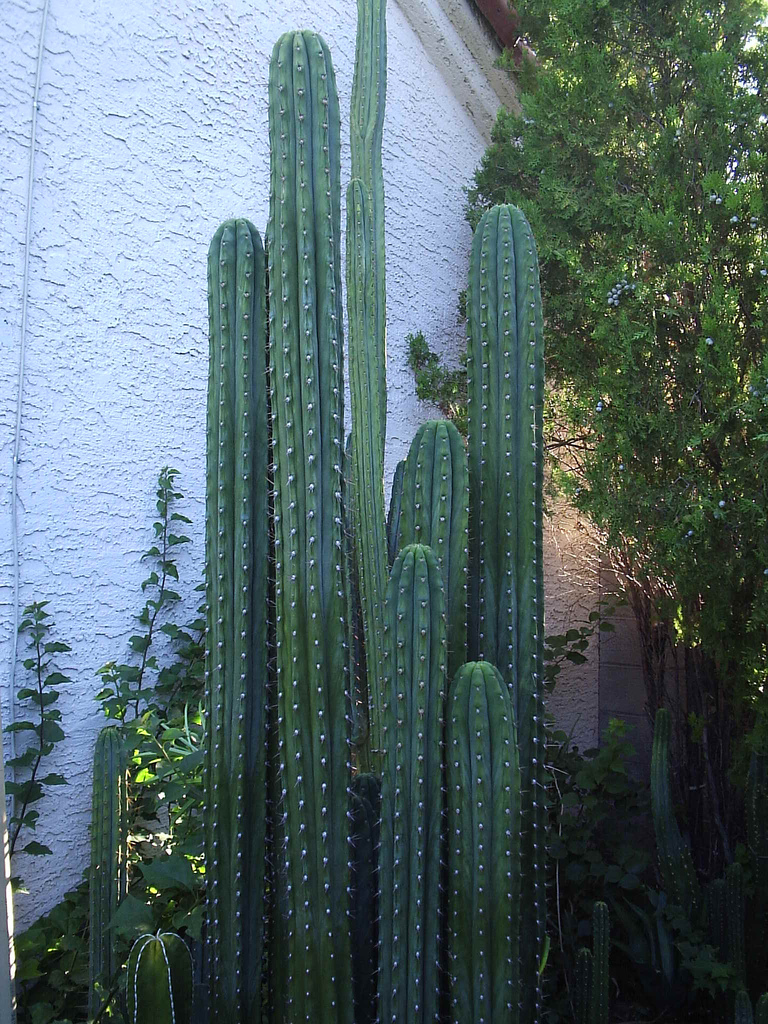 Peruvian Torch cactus ("Echinopsis peruviana" syn. "Trichocereus peruvianus") is a fast-growing columnar native to the western slope of the in , between about 2000-3000 meters above sea level.

The plant is bluish-green in colour, with frosted stems, and 6-8 broadly rounded ribs; it has large, white flowers. It can grow up to 7 meters tall, with stems up to 20 cm in diameter; it is fully erect to begin with, but later possibly arching over, or even becoming prostrate. Groups of 6-8 honey-coloured to brown rigid spines, up to 4 cm in length, with most about 1 cm, are located at the nodes, which are evenly spaced along the ribs, up to approximately 2.5 cm apart.

A short-spined variant which is nearly identical in appearance to its relative, "" (San Pedro cactus), is known. It is therefore possible that many misidentified plants are being sold (both as Peruvian Torch and as San Pedro), but since local variations as well as hybrids do exist (both cultivated and natural), this will obviously make proper identification difficult.

Some uses for "Echinopsis peruviana" include:

* Sore throat: of the stem.

* : The stem is cut, soaked for a day and the next day used to wash the area of pain with this mucilage water.

* Vetrinarial: For getting rid of pig s, the cactus stem is peeled, smashed and let to soak in water overnight. It is then mixed with food given to the animal.

* Adherent in paints: The peeled stems are beaten and left to stand in water, filtrate is added to minerals such as lime or . The result is a kind of gum for paint.

"Echinopsis peruviana" can be propagated from either seeds or cuttings.

Like many other plants, "Echinopsis peruviana" can be propagated from cuttings. The result is a genetic clone of the parent plant.

It contains a number of , in particular the well-studied chemical , which it sometimes contains at higher levels than those of "" (San Pedro cactus), although not as high as "" (Peyote).