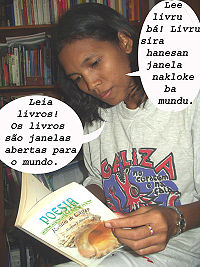 Campaigning for reading in Timor-Leste.

The Culture of East Timor reflects numerous cultural influences, including Portuguese, Roman Catholic and Malay, on the indigenous Austronesian cultures in East Timor.

Easily the most famous East Timorese author is Xanana Gusmão, the leader of the Timorese resistance organization Fretilin, and now the Prime Minister of independent East Timor. He wrote two books during the struggle for independence. Also a poet and painter, he produced works describing the culture, values, and skills of the Timorese people.

East Timor has been nominally Catholic since early in the Portuguese colonial period. The Catholic faith became a central part of East Timorese culture during the Indonesian occupation between 1975 and 1999 . While under Portuguese rule, the East Timorese had mostly been animist, sometimes integrated with minimal Catholic ritual, the number of Catholics dramatically increased under Indonesian rule. This was for several reasons: Indonesia was predominantly Muslim; the Indonesian state required adherence to one of five officially recognised religions and did not recognise traditional beliefs; and because the Catholic Church, which remained directly responsible to the Vatican throughout Indonesian rule, became a refuge for East Timorese seeking sanctuary from persecution.

The 'Apostolic Administrator' (de facto Bishop) of the Diocese of Dili, Monsignor Martinho da Costa Lopes, began speaking out against human rights abuses by the Indonesian security forces, including rape, torture, murder, and disappearances. Following pressure from Jakarta, he stepped down in 1983 and was replaced by the younger priest, Monsignor Carlos Filipe Ximenes Belo, who Indonesia thought would be more loyal. However, he too began speaking out, not only against human rights abuses, but the issue of self-determination, writing an open letter to the Secretary General of the United Nations, calling for a referendum. In 1996 he was awarded the Nobel Peace Prize, along with exiled leader José Ramos-Horta, now the country's President.

In spite of accusations by the Suharto regime that East Timor's independence movement, Fretilin, was communist, many of its leaders had trained to be priests, and their philosophy probably owed more to the Catholic liberation theology of Latin America than to Marxism.

However, in spite of the majority of the country's people now being Catholics, there is freedom of religion in the new secular republic, and the former Prime Minister Marí Alkatiri, is a Muslim of Yemeni descent.