The Culture of Lebanon is the product of various civilizations and cultures that have passed through the country over thousands of years. Starting with the first inhabitants of Lebanon, the Phoenicians, the country was then subsequently conquered and occupied by the Assyrians, the Persians, the Greeks, the Romans, the Arabs, the Crusaders, the Ottoman Turks and most recently the French, Lebanese culture has over the millennia evolved by borrowing from all of these groups. Lebanon's diverse population, composed of different ethnic and religious groups, has further contributed to the country's festivals, musical styles and literature as well as cuisine. Despite the ethnic, linguistic, religious and denominational diversity of the Lebanese, they “share an almost common culture. . . .”.[1] Lebanese Arabic is universally spoken while food, music, and literature are deep-rooted “in wider Mediterranean and Levantine norms. . . .”.[2] Lebanese society is very modern and similar to certain cultures of Mediterranean Europe as the country is "linked ideologically and culturally to Europe through France, and its uniquely diverse ethnic and religious composition [create] a rare environment that [is] at once Arab and European.[3] It is often considered as Europe's gateway to Western Asia as well as Asia's gateway to the Western World.[4]

It would be misleading to label Lebanon's cultural mosaic as being merely Arab when it seems clear that both indigenous and foreign influences have combined to make it a cultural crossroads over the centuries. This picture is seen clearly in Lebanon, a land of great contrasts, and one that cannot be defined by one culture alone, except if one were to bring them all together and classify them as 'Lebanese'.

Over the centuries, the Maronites formed a bond with the Vatican, and in the time of the French Mandate they eagerly took part in France's mission civilisatrice. There is also an old Maronite standard, dating from the 19th century writings of Tannus al Shidyaq, that the Maronites are the direct descendants of the Phoenicians. In the 1920s Lebanese writer Michel Chiha expanded on this idea of Phoenicianism.

In a concession to Lebanon's Arab and pre-Arab heritage, some Lebanese prefer to see Lebanon and its culture as part of a "Mediterranean" or "Levantine" civilization. Arab influence, nevertheless, applies to virtually all aspects of the modern Lebanese culture.

Practically everyone born and raised in Lebanon speak Lebanese Arabic as their mother tongue, with the exception of the Kurdish and Armenian minorities, though even these use it as a lingua franca when communicating with those outside their own ethnic groups. This universality of the Lebanese vernacular applies to all Lebanese, be they Muslim, Christian, Druze, Jews or members of other religious groups. Some words in use are Turkish remnants of the Ottoman rule which lasted up until World War I. Some Christian chanting in a few churches, and on Easter and Christmas holidays, is performed in the liturgically reserved Syriac, but even this is also a largely dying practice.

As mentioned, some minorities like Kurds (most of whom are Muslims) and Armenians (all of whom are Christians) retain the use of their traditional languages (Kurdish and Armenian) in everyday speak and cultural interactions. Though, as would be expected, they also communicate in Lebanese Arabic when conversing with those outside their communities. These minorities are estimated at around 2-3% of the population.

Language, food, music, arts and various cultural facets are local Lebanese and performed practically all in Lebanese. In the globalized world of today, Lebanese youths of all faiths are fairly Westernized in outlook, breaking away with traditions like most other people of larger cities around the world who previously adhered to their traditional cultures in areas such as dating, music, food, etc.

By comparison to most other Arab capitals, Beirut is more westernized and more socially liberal. Compared to Damascus, Cairo, and Baghdad, and especially in contrast to such cities as Riyadh, Beirut is more tolerant with regard to relations between men and women, and also with regard to homosexuality. While gay sex is technically illegal, Beirut has a number of gay bars and nightclubs, in addition to the Arab world's only LGBT rights organizations, namely Helem and Meem .

Lebanese food, music and customs overlap greatly with those of Egypt, Greece, Cyprus, Syria, Palestine, Jordan, and Turkey, since, like them, Lebanon was an Ottoman province for 402 years. Dress was historically Ottoman, but remains only as part of the folk culture. Today, almost all Lebanese wear Western dress.

It may thus be concluded that the Lebanese people, as a collective whole, are not agreed about their country's identity. Some think of it as Arab, others as Phoenician, while still others are undecided or uncommitted. It seems clear that Lebanon has an identity crisis that it has yet to move beyond.

Lebanon's official language is Classical Arabic yet Lebanese people speak Lebanese Arabic. The Lebanese Language differs a good deal from the literary language Fus'ha and owes its historical blend to the Syriac dialect of Aramaic, Turkish, and Traditional Arabic, as well as some French and English vocabulary. French and English are also widely spoken and understood. Most Lebanese are at least bilingual, speaking French or English in addition to their native Lebanese. Many speak a sort of Patois, a fusion of Lebanese and the aforementioned languages.

Due to Lebanon's location, the existence of a vast Lebanese diaspora, and the business interests of the Lebanese people worldwide, it has always been considered important to master a foreign language or two. All of Lebanon's educational institutions teach French and English. An educated Lebanese person is expected to know one foreign language at least. Perhaps the most talented linguists in Lebanon are the Armenians, some of whom speak four languages, namely Armenian, Arabic, French, and English.

Music in Lebanon has a long and varied tradition. Local and traditional music are highly popular, as are Western melodies.

While most prominent members of Lebanon's music scene left the country during the Civil War, many returned after the war and since the 1990s there has once has again been a vibrant music scene in Beirut. The city has a musical conservatory, the Conservatoire National Superieur de la Musique, which contains both Eastern and Western musical sections.

Probably the best known Lebanese singer is Fairuz. Fairuz over time has become something of a cultural symbol in Lebanon, sparking an intense patriotism. Her songs are broadcast daily on many Lebanese radio stations and television channels, as well as throughout the Middle East and Arab World. Fairuz is associated with the musical school of the Rahbani brothers, Mansour and Assi (who was her husband). It was they who composed most, though not all, of her songs, and were known to experiment with various genres of music. Fairuz's son Ziad Rahbani is also a prominent composer who experiments with Jazz and Bossa Nova, and has composed a number of well known musical plays.

Other artists that are also very well known and critically acclaimed include Julia Boutros, Majida El Roumi, and Marcel Khalife, who is also a composer and oud player in his own right.

In the 20th century Lebanese folk music was pioneered by such artists as Zaki Nassif, Wadih Safi, and the legendary diva Sabah. Some Lebanese artists like Najwa Karam remain loyal to a folkloric genre of music known as 'Jabali' (pertaining to the mountains), while many other artists incorporate Western influences into their works. Lebanese artists are among the most popular in the Middle East alongside Egyptian performers, and the star scene includes prominent figures like Najwa Karam, Julia Boutros, Waleed Tawfeek, and Majida El Roumi. Lebanon also has a large number of Arabic Pop singers, who cater to the local and regional markets.

Since the 1990s there has been a growing number of Lebanese rap and hip hop artists, singing about Lebanese issues in the spoken language or in French. These have included Rayess Bek, Eshkman, and the French language rapper Ramez, among others.

Beirut's open, cosmopolitan atmosphere allows for a vibrant, Western oriented nightlife. The city and its peripheries contain a sizable number of pubs and nightclubs, whose music varies from Rock to House to Rap and Hip hop. A number of clubs also feature live bands that play regularly or from time to time. Some pubs and clubs have a mixed repertoire, playing both Eastern and Western melodies.

In addition, the country's cultural festivals such as those of Bustan, Beiteddine, and the Baalbeck International Festival, host a large number of international artists each year. The most prestigious of these festivals is perhaps that of Baalbeck, which began in 1956 and was revived in the late 1990s after having stopped during the Civil War. The Casino du Liban, near Jounieh, also hosts a sizable number of artists, both local and foreign. 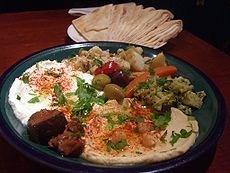 Lebanese cuisine is similar those of many countries in the Eastern Mediterranean, such as Egypt, Syria, Turkey, Greece and Cyprus.

The Lebanese national dishes are the kibbe, a meat pie made from finely minced lamb and burghul (cracked wheat), and the tabbouleh, a salad made from parsley, tomatoes, and burghul. The national beverage is arak, a strong anise-flavored liquor made from fermented grape juice. It is usually drunk with water and ice, which turns the clear liquid milky-white, and usually accompanies food. Arak is a strong spirit similar to the Greek Ouzo and the Turkish Raki.

Lebanese restaurant meals begin with a wide array of mezze-- small savoury dishes, such as dips, salads, and pastries. The mezze are typically followed by a selection of grilled meats and/or fish. In general, meals are finished with Arabic coffee and fresh fruit, though sometimes a selection of traditional sweets will be offered as well.

M'Juhdara, a thick stew of onions, rice and lentils, is sometimes considered poor man's fare and is often eaten around Lent by people in the Lebanese diaspora.

Beirut and its environs contain many restaurants of various national origins. At the same time, wine making is growing in popularity in Lebanon and a number of vineyards currently exist in the Bekaa valley and elsewhere. Beer is also highly popular and Lebanon produces a number of local beers, of which Almaza is perhaps the most popular.

In 2009, the country hosted the Winter Asian Games, which took place in the capital, Beirut.