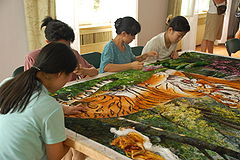 Lapel pins from the DPRK

Juche's ideology asserts Korea's cultural distinctiveness and creativity as well as the productive powers of the working masses.

Art in North Korea is primarily didactic; cultural expression serves as an instrument for inculcating Juche ideology and the need to continue the struggle for revolution and reunification of the Korean Peninsula. Foreign governments and citizens, especially the Japanese and the Americans, are depicted negatively as imperialists; revolutionary heroes and heroines are seen as saintly figures who act from the purest of motives. The three most consistent themes are martyrdom during the revolutionary struggle (depicted in literature such as The Sea of Blood), the happiness of the present society, and the genius of the leader.

Kim Il-sung himself is described as a writer of "classical masterpieces" during the anti-Japanese struggle. Novels created under his direction include The Flower Girl, The Sea of Blood, The Fate of a Self-Defense Corps Man, and The Song of Korea; these are considered "prototypes and models of Juche literature and art." A 1992 newspaper report describes Kim in semi-retirement as writing his memoirs--"a heroic epic dedicated to the freedom and happiness of the people."

The state and the Korean Workers' Party control the production of literature and art. In the early 1990s, there was no evidence of any underground anti-regime literary or cultural movements such as the samizdat in the Soviet Union or those that exist in the People's Republic of China. The party exercises control over culture through its Propaganda and Agitation Department and the Culture and Arts Department of the KWP's Central Committee. The KWP's General Federation of Korean Literature and Arts Unions, the parent body for all literary and artistic organizations, also directscultural activity.

The population has little or no exposure to foreign cultural influences apart from performances by song-and-dance groups and other entertainers brought in periodically for limited audiences. These performances, such as the Spring Friendship Art Festival held annually in April, are designed to show that the peoples of the world, like the North Koreans themselves, love and respect the country's leader. During the 1980s and the early 1990s, the North Korean media gave Kim Jong-il credit for working ceaselessly to make the country a "kingdom of art" where a cultural renaissance unmatched in other countries was taking place. Indeed, the younger Kim is personally responsible for cultural policy.

A central theme of cultural expression is to take the best from the past and discard capitalist elements. Popular, vernacular styles and themes in literature, art, music, and dance are esteemed as expressing the truly unique spirit of the Korean nation. Ethnographers devote much energy to restoring and reintroducing cultural forms that have the proper proletarian or folk spirit and that encourage the development of a collective consciousness. Lively, optimistic musical and choreographic expression are stressed. Group folk dances and choral singing are traditionally practiced in some but not all parts of Korea and were being promoted throughout North Korea in the early 1990s among school and university students. Farmers' musical bands have also been revived.

P'yŏngyang and other large cities offer the broadest selection of cultural expression. "Art propaganda squads" travel to production sites in the provinces to perform poetry readings, one-act plays, and songs in order to "congratulate workers on their successes" and "inspire them to greater successes through their artistic agitation." Such squads are prominent in the countryside during the harvest season and whenever "speed battles" to increase productivity are held.

North Korea is famous for its "mass games". These are exhibitions where thousands of North Koreans perform highly choreographed dances, especially traditional dances and gymnastics, often engaging in simultaneous rhythms of movement. The performers sing and chant their loyalties to Kim il-sung, the KWP, and to the principle of Juche.

Literature and music are other venues for expressing the country's ideology. A series of historical novels—Pulmyouui yoksa (Immortal History)-- depict the heroism and tragedy of the preliberation era. The Korean War is the theme of Korea Fights and The Burning Island. Since the late 1970s, five "great revolutionary plays" have been promoted as prototypes of the party's literature: The Shrine for a Tutelary Deity, a theatrical rendition of The Flower Girl, Three Men, One Party, "A Letter from a Daughter, and Hyolbun mangukhoe" (Resentment at the World Conference).

"Revolutionary operas," derived from traditional Korean operas, known as ch'angguk, often utilize variations on Korean folk songs. Old fairy tales have also been transformed to include revolutionary themes. As part of the party's policy of preserving the best from Korea's past, moreover, premodern vernacular works such as the Sasong kibong (Encounter of Four Persons) and the Ssangch'on kibong (Encounter at the Two Rivers) have been reprinted.

Musical compositions include the "Song of General Kim Il Sung," "Long Life and Good Health to the Leader," and "We Sing of His Benevolent Love"--hymns that praise the nation's leader. Another song such as these - called "Ten Million Human Bombs for Kim Il Sung" - is played at seven 'o-clock each morning. According to a North Korean writer,[who?] "Our musicians have pursued the party's policy of composing orchestral music based on famous songs and folk songs popular among our people and produced numerous instrumental pieces of a new type." This music includes a symphony based on the theme of The Sea of Blood, which has also been made into a revolutionary opera.

Motion pictures are recognized as "the most powerful medium for educating the masses" and play a central role in social education. According to a North Korean source, "films for children contribute to the formation of the rising generation, with a view to creating a new kind of man, harmoniously evolved and equipped with well-founded knowledge and a sound mind in a sound body."[citation needed] One of the most influential films, "An Jung-geun Shoots Ito Hirobumi," tells of the assassin who killed the Japanese resident-general in Korea in 1909. An is depicted as a courageous patriot, but one whose efforts to liberate Korea were frustrated because the masses had not been united under "an outstanding leader who enunciates a correct guiding thought and scientific strategy and tactics." Folk tales such as "The Tale of Chun Hyang," about a nobleman who marries a servant girl, and "The Tale of Ondal" have also been made into films.

Arguably[who?] the most distinct and impressive form of contemporary cultural expression in North Korea is architecture and city planning. P'yongyang, almost completely destroyed during the Korean War, has been rebuilt on a grand scale. Many new buildings have been constructed during the 1980s and 1990s in order to enhance P'yongyang's status as a capital.

Major structures are divided architecturally into three categories: monuments, buildings that combine traditional Korean architectural motifs and modern construction, and high-rise buildings of a modern design. Examples of the first include the Ch'ollima Statue; a twenty-meter high bronze statue of Kim Il-sung in front of the Museum of the Korean Revolution (itself, at 240,000 square meters, one of the largest structures in the world); the Arch of Triumph (similar to its Parisian counterpart, although a full ten meters higher); and Chuch'e Tower, 170 meters high, built on the occasion of Kim's seventieth birthday in 1982.

The second architectural category makes special use of traditional tiled roof designs and includes the People's Culture Palace and the Grand People's Study House, both in P'yongyang, and the International Friendship Exhibition Hall at Myohyang-san. The latter building displays gifts given to Kim Il-sung by foreign dignitaries. In light of North Korea's current close relationship to China, and during the Choson Dynasty, it is significant that the section of the hall devoted to gifts from China is the largest.

The third architectural category includes high-rise apartment complexes and hotels in the capital. The most striking of these buildings is the Ryugyong Hotel, unfinished as of now (with construction halted from 1992 - April 2008). Described as the world's tallest hotel at 105 stories, its triangular shape looms over north-central P'yongyang. The Koryo Hotel is an ultramodern, twin-towered structure forty-five stories high.

Much construction occurred before celebrations of Kim Il-sung's eightieth birthday, including the building of apartment complexes and the Reunification Expressway, a four-lane road connecting the capital and the Demilitarized Zone. According to a journalist writing in the Far Eastern Economic Review, the highway is "an impressive piece of engineering" that "cuts a straight path through mountainous terrain with 21 tunnels and 23 bridges on the 168 kilometers route to P'anmunjm."[citation needed] As in many other construction projects, the military provided the labor. North Korea has stated its hope that upon eventual reunification the highway will carry back-and-forth traffic.