The Kuwaiti culture is well known for its hospitality and generosity.[1] 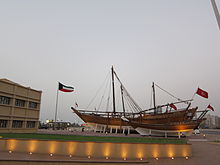 Al-Hashemi-II Marine Museum in Kuwait City. Demostrats the founding of Kuwait as a Sea port for merchants.

The Kuwaiti culture, just like many other cultures, takes great pride in hospitality. Guests in people homes are treated with great warmth and respect. Host exhibit their polished manners and expect the same back.

Kuwaitis traditionally greet each other by shaking hands and kissing cheeks. However, men and women do not exchange more than a possible handshake to greet each other in respect unless the man and the woman are related to one another. It is also customary for people greeting each other to ask a long series of questions concerning one's health, that of their relatives, their jobs, etc., such as asking how good they are feeling in order to relax the other person and give a sense of intimacy. Usually, elders are greeted first as a sign of respect.

Hospitality in Kuwait is often portrayed through the serving of tea and coffee. It is very uncommon for a guest to enter a house, office, or even some stores without being offered tea or coffee. In Kuwaiti bedouin custom, a guest's refusal of tea, coffee, or such offerings is sometimes viewed as insulting by the host, as it is as if the guest is denying the host's efforts of being hospitable and generous. Common types of teas that are served include chai, black tea, green tea, peppermint, lemon, and chamomile. The tea is prepared in a kettle and brought up to a boil before being served. Sometimes, the black tea is prepared with cardamom; also, milk may be added as a subsidiary to sugar. The hot drinks are usually accompanied by a selection of nuts or sweets such as baklawa, and later, possibly a cold drink. 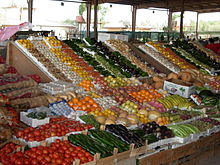 Food plays a large part in Kuwaiti culture. The national dish of Kuwait known as machboos (Arabic: مكبوس‎) consists mainly of mutton, chicken, or fish placed over or mixed in a large mass of well-cooked and prepared rice. Food is almost always prepared and served in large amounts, and it is extremely common for households to invite guests over to share meals.

The Dewaniya has existed in Kuwait since time immemorial. In the old City of Kuwait it was the reception area where a man received his business colleagues and male guests. Today the term refers both to a reception hall and the gathering held in it, and visiting or hosting a dewaniya is an indispensable feature of a Kuwaiti man’s social life. Some claims that the term originally referred to the section of a bedouin tent where the menfolk and their visitors sat apart from the family.

Dewaniya became a fundamental part of Kuwaiti life. Hence, it has become a mark in their traditional daily life.

The Dewaniya served an important purpose in the development of Kuwait over the last 250 years by facilitating quick communication and consensus building among other things. There are many type of Dewaniya's that have evolved from the original archetype and they differ only in terms of the groups they serve and the level of formality.

The Dewaniya's are the core of Kuwait’s social, business and political life, the places where topics of interest are discussed, associates introduced, alliances formed, and similar networking activities undertaken. Formal Dewaniya's may be convened to discuss particular topics, sometimes with invited guest speakers. They are also called for particular purposes, such as election campaigns. Formal Dewaniya's are the root of Kuwait’s consensual political system.

Dewaniya has several types, private, public and family. The private is just for close friends who usually gather daily and public are fixed with a weekly timing where anyone can visit, while family dewaniya, is an official gathering of prominent family, where all people can come and meet the family members.

This was the original form of the Dewaniya that started when each family (only a handful in the 18th century) very known as the Family Dewan would set up an extension to their main home to host guests and discuss important issues. This would also be the place that wedding ceremonies and funeral rites would be held for the male side of the family. The elders of the family are usually in attendance and sit at the head of what is usually a U-shaped hall to welcome guests and lead the discussions.

These Dewaniya's are a relatively recent development of the 20th century when Kuwaitis started seeking political rights and more representation in a system that had become more skewed towards an absolutist rule by the Emir in contrast to the more participatory consensual system that existed earlier. Its considered as a public Dewaniya.

These Dewaniya's are usually organized by groups of friends of the same age group on one member's property. This type is usually the most relaxed with participants playing cards Janjifa like Koutbo6, smoking Shisha (sometimes called the Hookah) or watching football games and other sports. Its considered as a private Dewaniya.

Most Dewaniya's start after the sunset till midnight the whole year round and recently it started having a break in summer.