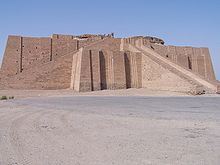 Reconstruction of the 4,100 year old Great Ziggurat of Ur in southern Iraq.

Iraq has one of the world's oldest cultural histories. Iraq is where the Ancient Mesopotamian civilizations were, whose legacy went on to influence and shape the civilizations of the Old World. Culturally, Iraq has a very rich heritage. The country is known for its poets and its painters and sculptors are among the best in the Arab world, some of them being world-class. Iraq is known for producing fine handicrafts, including rugs and carpets. The architecture of Iraq is seen in the sprawling metropolis of Baghdad, where the construction is mostly new, with some islands of exquisite old buildings and compounds, and elsewhere in thousands of ancient and modern sites across Iraq.

Unlike many Arab countries, Iraq embraces and celebrates the achievements of its past in pre-Islamic times. What is now Iraq was once the Cradle of Civilization in ancient Mesopotamia and the culture of Sumer, where writing and the wheel were invented. In the 8th and 9th centuries, the Islamic Abbasid Caliph's presided over what was then one of the world's richest civilizations. 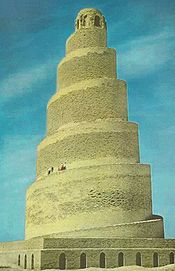 Minaret at the Great Mosque of Samarra. c. 850

Football is the most popular sport in Iraq. Football is a considerable uniting factor in Iraq following years of war and unrest. Basketball, swimming, weightlifting, bodybuilding, boxing, kick boxing and tennis are also popular sports.

The Iraqi Football Association (Arabic: الاتحاد العراقي لكرة القدم‎) is the governing body of Football in Iraq, controlling the Iraq national football team and the Iraq Super League (also known as Dawri Al-Nokba). It was founded in 1948, and has been a member of FIFA since 1950 and the Asian Football Confederation since 1971. The Iraqi national football team are the 2007 AFC Asian Cup Champions after defeating Saudi Arabia in the final.

Iraq is a country of a wide and varied heritage, home to Muslims, Christians, Jews, Chaldeans, Assyrians and "Marsh Nomads", amongst countless others. As such many have contributed to the wide spectrum of Iraqi Culture.

Traditional music consists of instruments such as ouds, flutes, violins, drums, and tambourines. Now however, there are many young artists generating pop, rap, and wider types of musical genres. Kulthum and Fairouz are two woman singers renowned for their voices and especially loved in Iraq.

Tea houses are scattered over Iraq, and in the afternoon it is a habit for shopkeepers to retreat into the back with a close friends to sip tea over gossip, an Iraqi "siesta".

Rites of passage in Arab Iraq are mainly centered on children being schooled enough to correctly read the Quran, quite the challenging task. The Quran is perhaps one of the hardest texts to read, both because of depth of meaning and due to the difficult range of sounds Arabic demands from the human vocal cords. The child with least pronunciation errors is called the hafiz or memorizer. There is usually a large celebration in the child's honor.

Marriages and births are enormous parts of Iraqi life. It is common to have hundreds of people attend weddings. Marriages are often arranged, but rarely forced.

Iraqi Arabs believe that wisdom comes with wrinkles in old age, and as such grandparents and parents are highly respected. It is seen as a disgrace if a child is publicly rude to someone of the elder generation.

Generosity is valued in Iraqi culture, and it is seen as rude to snub someone asking a favor. This is heightened especially during the month of Ramadan, when it is necessary to give zakat or donations to the poor. Many families, rich and poor, cook for the homeless, or invite them to dinner. Some prepared plates of baklava or a dish of kebab to take to them. 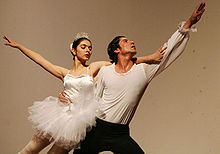 Two ballet dancers of the Iraqi National Ballet performing in Iraq in 2007.

Some important cultural institutions in the capital include the Iraqi National Orchestra – rehearsals and performances were briefly interrupted during the Occupation of Iraq but have since returned to normal, the National Theatre of Iraq – The theatre was looted during the 2003 Invasion of Iraq, but efforts are underway to restore the theatre. The live theatre scene received a boost during the 1990s when UN sanctions limited the import of foreign films. As many as 30 movie theatres were reported to have been converted to live stages, producing a wide range of comedies and dramatic productions.

Institutions offering cultural education in Baghdad include the Academy of Music, Institute of Fine Arts and the Music and Ballet school Baghdad. Baghdad also features a number of museums including the National Museum of Iraq - which houses the world's largest and finest collection of artifacts and relics of Ancient Iraq civilizations; some of which were stolen during the Iraq War.