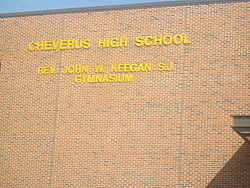 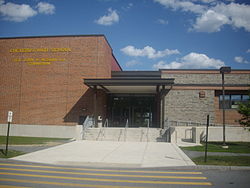 The front of Cheverus in June 2008

The school is located on property overlooking Portland's Back Cove. It consists of two buildings: the Main building and Loyola Hall, (named after Saint Ignatius of Loyola). Most math and science classes are taught in the main building, while English, history, theology, and fine arts classes are taught in Loyola Hall. The sports facilities are in the Rev. John Keegan Gymnasium, which connects to the main building. The campus also includes Boulos Stadium and Shea Field.

Originally named The Catholic Institute High School, it was renamed Cheverus in 1926 after the first bishop of Boston, Jean-Louis Lefebvre de Cheverus. Cheverus was first located on Free Street, moved to Cumberland Avenue in 1946, and then moved to its current location on Ocean Avenue in 1952.

Cheverus was originally run by diocesan priests. In 1942, the Society of Jesus assumed responsibility of the school.

In 2000, the school became coeducational.

In 1998, nine male alumni claimed that they had been molested while attending Cheverus. Two former faculty members were accused. The school confirmed the abuse and apologized to the victims. The victims also accused both Cheverus High School and the Portland Diocese of hiding information, and that they had previously known about the abuse.

Settlements to victims have reached a cumulative seven figures, with ongoing counseling additional. Primarily, two long time Cheverus faculty members, one the former chair of the English Department, the other, the former head of the Track Team, have admitted they are guilty. Both teachers lost their jobs at Cheverus in 1998. [2]

Cheverus offers 12 AP classes, and has an honors option for most of its courses. Students must take 25.5 courses in 4 years, including at least 4 mathematics courses, 4 English courses, 4 Theology courses, 3 science courses, 3 foreign language courses (continuing within the same language), and 3 social studies courses [1].

Cheverus’ Campus Ministry provides opportunities for students to experience Jesuit tradition and develop their own personal faith through prayer, reflection and services. Campus Ministry programs include liturgies and services, retreats, and involvement with Habitat For Humanity. Cheverus High School gathers for worship at significant times during the year. During a regular week, an optional daily Mass is held for students, faculty, staff, parents, and friends in the Loyola Chapel on every morning at 7:15 a.m. In addition to its Theology courses, Cheverus has a retreat program tailor-made to meet the spiritual needs of its students. [3] Prominent among these retreats is Kairos (retreat), open to juniors and seniors (with priority given to seniors). The retreat was begun after three students made the retreat with Boston College High School and returned to lead Cheverus' Kairos V at Cheverus in the fall of 2006.

Both male and female students are required to wear a suit coat, a button-down uniform shirt, and dress shoes. Male students must also wear a tie and dress pants, while females may wear either skirts or dress pants. [3] 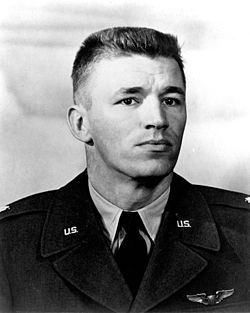