Jesuit High School is an all-male Catholic high school in New Orleans, Louisiana. The school was founded in 1847. It is located in the Roman Catholic Archdiocese of New Orleans.

Jesuit is a college preparatory school with more than 99% of graduates moving on to attend colleges and universities all across the country. Jesuit ranks among the top private schools in the nation in number of National Merit semifinalists.[4] The class of 2008 received $17,974,000 in college scholarship offers, an average of $65,838.83 per student.[2]

The College of the Immaculate Conception was founded in 1847 but did not open until 1849; it was both a secondary school and a college, and both were located in the Faubourg Ste. Marie of New Orleans (now the New Orleans Central Business District), a block upriver from the French Quarter, at the corner of Baronne and Common Streets. In 1911, the high school and college divisions were split, and the college division relocated to St. Charles Avenue, eventually becoming Loyola University New Orleans. The high school remained on Baronne Street until 1926, when it was moved to its current location at 4133 Banks Street in Mid-City. The Church of the Immaculate Conception [5] remains on the original campus and plays an active role in the Jesuit community.

Since 1926, several additions have been made to the campus. In 1953 a wing was added along Palmyra Street; the addition included an auditorium, the Chapel of the North American Martyrs, a cafeteria, a library, several classrooms, and a band room.

The mascot is a blue jay posed with his fists raised, designed by cartoonist Walt Kelly of Pogo fame. A contest was held to name the mascot, and the name "Jayson," submitted by a student, won. The school's colors are blue and white to honor the Virgin Mary. Student athletes wore a white sweater with a blue letter "J" on it and were referred to as the "Blue J's," hence the mascot. As with most Jesuit schools, the school's motto is Ad Majorem Dei Gloriam ("For the Greater Glory of God"). 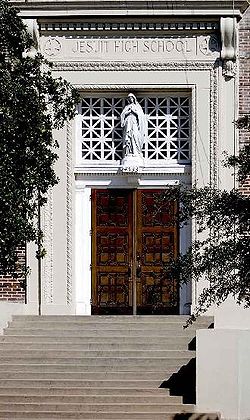 The front doors of Jesuit High School, often referred to as the Mary Doors, as seen from Carrollton Ave.

In football, Jesuit High School vs. Holy Cross High School is the oldest continuous high school rivalry in Louisiana and one of the oldest continuous high school football rivalries in the United States. The first game was played in 1922 (Jesuit won by 52–0) and the two teams have played every year since (twice in 1963: once in regular season and another time for the state crown which Holy Cross won) Blue Jays vs. Tigers.

In February 1965, Jesuit's all-white basketball team played a secret game against St. Augustine, the city's all-male, all-black high school. The Purple Knights won the game, which was the basis for the 1999 motion picture Passing Glory. Jesuit won the 1965 Louisiana High School Athletic Association state championship in Class AAA, which was at the time the state's highest classification, while St. Augustine won the championship of the Louisiana Interscholastic and Literary Organization, the sanctioning body for the state's black schools. In the fall of 1967, St. Augustine joined the LHSAA and became a rival for the Blue Jays in the New Orleans Catholic League through the 2010-11 school year, when the Purple Knights were forced down to Class 4A by the LHSAA.

In the 1998–1999 season, and again in the 2006–2007 season, Jesuit fielded one of the best soccer teams in the nation, winning the Louisiana state title and in both cases posting an incredible 31-0-0 record. This record gave the Jesuit team a #3 (1998–99) and a #2 (2006–2007) rank in the nation. In the 2007–2008 season, the rugby team won the State Championship for the sixth consecutive year with an undefeated season, only allowing 12 points while scoring over 300. Because of a conflict with the senior prom, the team was forced to play in the more difficult mulit-school division at the Southern Regionals in Murfreesboro, Tennessee. The team swept regionals and moved on to become 8th in the country in the multi-school division at the USA Rugby Boys High School National Championship.[7] 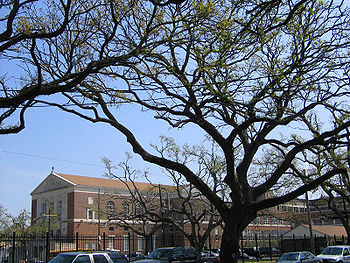 A rear view of Jesuit from the corner of Banks and S. Solomon St.

As a Catholic preparatory high school, Jesuit contains over fifty clubs and organizations for students to participate in.[8] Listed below are the clubs which play integral roles in student life:

When the flooding following Hurricane Katrina devastated New Orleans, Jesuit High School was inundated, five feet (1.5 m) of water destroying the ground floor. When the school announced that it was closed indefinitely, many students enrolled in schools in cities to which they had evacuated. The largest concentration of students attended a satellite school at Strake Jesuit College Preparatory in Houston; at one point, approximately 420 displaced students attended classes at night with their own teachers and classmates. In mid-October, Jesuit opened another satellite school at St. Martin's Episcopal School in Metairie in unincorporated Jefferson Parish, Louisiana, which about 500 students attended until Thanksgiving. After Thanksgiving, Jesuit's students and faculty returned to their own campus, becoming the first flooded school in New Orleans to reopen—albeit with an unusable first floor. The school held its annual Thanksgiving Drive for the poor living in the surrounding neighborhoods. On 23 January 2006, 1285 of the 1450 students returned to attend Jesuit for the second semester.

People who attended Jesuit High School, but did not graduate: