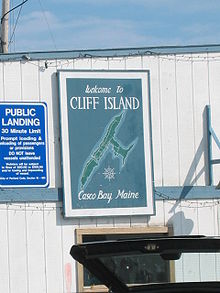 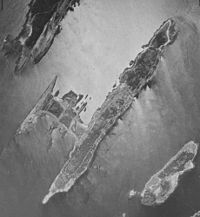 Cliff Island is an island in Casco Bay Maine. It is part of the city of Portland, Maine. As of the 2000 census, the island had a year-round population of approximately 60 people. In the summer, the island's population grows to about 200, despite the fact that it is the only year-round inhabited island in Casco Bay with no paved roads. Originally named Crotch Island for its H-shape and natural harbors, the name was changed to end mail mix-ups with the other Crotch Island in Maine.

In the early 20th century the island's inns were a draw for summer tourists. There are no hotels any longer, but many homes are available for weekly rentals or longer. While there are no public services, residents enjoy a community hall, a tennis court, baseball field, and playground. The residents are served by a USPS Post Office, fire department, and one-room school for elementary grades.

In 1987 the feature film The Whales of August was filmed entirely on location on Cliff Island. The buoy that was used in the film as a transitioning tool is now on display outside of the Casco Bay Lines Ferry Terminal. The film was among the last for stars such as Bette Davis, Lillian Gish, Vincent Price, and Ann Sothern. The cottage where the film was made is still owned by Frank Pitkin's family whose grandmother, Josephine Pitkin, built the cottage named "Pitkin Point", in 1910.

Cliff Island residents (also known as Cliff Islanders) travel back and forth to the mainland via the Casco Bay Lines ferry service. It takes an hour and a half. Cliff Islanders buy groceries in Portland. There is a gas station and a small store on the island. Golf carts and electric carts are most often used for transportation. A barge ramp was added in 2007 to ease delivery of trucks and heavy items.