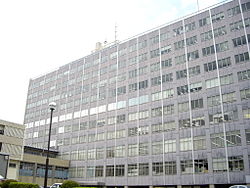 Matsudo is located in the far northwestern corner of Chiba Prefecture, bordered by the Edogawa River to the west.

The area around Matsudo has been inhabited since prehistoric times, and archaeologists have found remains from the Jomon period, as well as burial tumuli from the Kofun period. During the Edo period, the area was tenryo controlled directly by the Tokugawa shogunate, and contained a number of horse ranches providing war horses for the Shogun’s armies. It also developed as a post station on the Mito Kaido connecting Edo with Mito. After the Meiji Restoration, Matsudo Town was created in Higashikatsushika District Chiba Prefecture in 1878. Matsudo attained city status on October 1, 1943.

On September 1, 1954, the neighboring town of Kashiwa merged with neighboring Kogane Town and Tsuchi and Tanaka villages to form the new city of Tokatsu (東葛市, Tokatsu-shi?). However, many politicians in Kogane Town were vehemently opposed to the merger, and forced its dissolution on October 15, 1954 with most of former Kogane Town merging with Matsudo instead. Beginning in the 1960s, the rapid economic growth in Japan (and the Tokyo area in particular) led to a construction boom in Matsudo and the development of the area as a major suburb of Tokyo. Matsudo is now the third-largest city in Chiba Prefecture and a major bedroom community (11th largest city) in the Greater Tokyo Area.

Matsudo is a regional commercial center and a bedroom community for nearby Chiba and Tokyo. The city has a mixed industrial base.