/ˈdʒɛmbeɪ/ jem-bay) also known as jembe, jenbe, djbobimbe, jymbe, yembe, or jimbay, or sanbanyi in Susu; is a skin-covered drum meant to be played with bare hands (but could be played with drum sticks). According to the Bamana people in Mali, the name of the djembe comes directly from the saying "Anke djé, anke bé" which translates to "everyone gather together in peace" and defines the drum's purpose. In the Bambara language, "djé" is the verb for "gather" and "bé" translates as "peace".[1]

It is a member of the membranophone family of musical instruments: a frame or shell (in the djembe's case it is a wood shell) covered by a membrane or drumhead made of rawhide or some other material. Djembes are commonly about 12" (30 cm) in diameter and 24" (60 cm) in height, varying a few inches. They can also be found in many smaller sizes, from 5" (13 cm) to 18" (46 cm) in diameter. As a result of the goblet shape, the density of the wood, the internal carvings, and the skin, there is a wide range of tones that can be produced by the djembe. The rounded shape with the extended tube of the djembe body forms a device known in physics as a Helmholtz resonator, giving it its deep bass note. The primary notes are generally referred to as "bass", "tone", and "slap", though a variety of other tones can also be produced by advanced players. The slap has a high and sharp sound, the tone is more round and full, and the bass is low and deep. The djembe is a classical african drum and is the most use and religious.

The proper sound is achieved with minimum effort for maximum effect. The key is to either focus or disperse the hand's energy and to position the hand in the correct place. The bass and tone notes require focused energy (beginners will have the most success by holding their fingers firmly together), while the slap requires dispersed energy (fingers are relaxed).

Striking the skin with the palm and fingers toward the drum's centre produces a bass note; striking the skin near the rim (with the fleshy part of the palm just above the rim) produces the tone and slap. The tone must ring by striking like it's a hot pan. Beginners may think of the tone and slap as fingers "together" and "apart." Advanced players will not take the time to make that obvious physical change but will rather make a less visibly obvious change from "focused" to "dispersed."

There is general agreement that the origin of the djembe is associated with a class of Mandinka blacksmiths known as Numu. The wide dispersion of the djembe drums throughout West Africa may be due to Numu migrations. Despite the associations of the djembe with the Numu, only certain people are allowed to play it.

Spelling "jembe" with the "dj" comes from the fact that French has no hard "j" sound like that found in English. The "dj" is used to indicate the hard "j" pronunciation. The French were instrumental in studying and describing African drumming to the world. However, colonization by the French is a sore spot for many West African people, and spelling jembe with the "d" can be a painful reminder of that. Since independence (1958–1960) African governments have been working toward indigenous ways of spelling their local languages in accordance with international standards of phonetic transcription. (Charry) In the Malinke language, the word is spelled "dyìnbe" because the Malinke orthography does not include the letter "j" (cf. Marianne Friedländer, Lehrbuch des Malinke, Langenscheidt Verlag, 1992, p. 279, 159-160).

Traditionally crafted djembe drums were carved from a single section of a Lenge tree. Lenge was used for centuries due to its acoustic and spiritual qualities among the Malinke, whose traditional wisdom states that a spiritual energy, or nyama, runs through all things, living or dead. Other types of wood may also be substituted, depending upon the forests accessible to the drum makers. Some West African hardwoods used for musician-quality instruments carved in Guinea, Mali, Senegal, and Côte d'Ivoire include djalla, dougi/dimba, khari/hare/gueni, and acajou. Properly made drums are not smooth on the interior but have a spiral channel inside that enhances the tonal qualities. Splinters and rough carving inside are signs of a hastily made drum. The djembe is headed on one side with the shaved skin of a goat, antelope or cow. Prior to the twentieth century, the skin was attached with the sinew or intestine of the animal, or by cutting and stretching a strip of rawhide.

The construction of the djembe has changed significantly over the past half-century. The use of industrialized materials, such as steel hoops, nylon-core rope, and rubber tires, began with the advent of the West African Ballets, and has become the norm. As djembes are increasingly exported to foreign shores, some take advantage of overseas markets by cutting corners, while others push further development and refinement of djembe construction. In the mid 1990s furniture makers in Ghana took note of the commercial success being experienced by traditional djembe drum carvers. The craftspeople in Ghana, where the kpanlogo and oblenten drums are the most well known traditional drums, began to carve and sell djembes from Tweneboa, a soft wood. Using soft wood required a much thicker shell that fails to produce the resonant and explosive sound of a hardwood djembe.

The drumheads are typically made from goat skin and more rarely can be antelope, zebra, deer, or calfskin. West African goat skins are known to djembe musicians as having a different sound than goats domesticated in more temperate climates. Goats raised in West Africa experience a rougher existence, different climate, and different diet, which apparently toughen and harden the skins in a way that impacts their sound quality. Goat skins from animals bred and raised in the Americas and Europe have been known to be softer and tear more easily under the extreme tension required for a playable drum.

The djembe has also spawned a plethora of look-alikes made from synthetic materials. The explosion of drum circles, as well as the use of djembes in pop and rock ensembles, have led to an increase in synthetic drums. These drums have shells formed of plastic or resin-composite materials, such as Acousticon, metal mechanical tuning rather than traditional ropes, and often plastic such as FiberSkyn rather than goatskin heads. They are often manufactured and sold by drumset and percussion manufacturers such as Pearl, Meinl, Toca, and Remo.

Djembe drums are tuned by evenly pulling the vertical ropes very tightly so that a system of metal rings brings the skin down over the drum shell. These verticals are tightened all the way around, perhaps taking multiple passes, and using a lever of some sort.(Rope puller) The next step is to use more rope to put in horizontal "twists" of the vertical ropes (Mali weave), also known as "diamonds". It passes under two verticals (diamond pattern), back over one, under one (making a Z or S shape), then gets pulled hard and down. Uniform and parallel rows of twists, as low as possible, is the ideal.

When a new skin is being put on a drum, this whole pulling process is preceded by soaking a skin in water until it is very pliable. That wet skin is placed on the drum with the ring system while the rope verticals gently pull the rings down a bit. Then it's left to dry completely before the vigorous pulling and twisting described above happens. Some drum makers successfully tighten their drums all the way while the skins are wet. 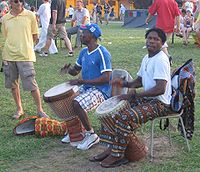 The djembé can be found in some African American and American subcultures. The bags and the clothing of the man on the right are printed with traditional kente cloth patterns.

The djembe plays a key role in modern music that needs a highly percussive rhythm section. It has been used by such artists as The Beatles, Ben Harper, Queens of the Stone Age, Keller Williams, Paul Simon, Peter Gabriel, Larry Mullen, Jr of U2, Grateful Dead, Bedouin Soundclash, Incubus' Brandon Boyd, Gruvis Malt, Brian Rosenworcel of Guster, Dispatch, of bands such as The Spirit Merchants, FreeFall, Railway Paddys, Valentino Black, Mick Dunne, Some Lemon, Louisiana Francis, Derek McCreanor, I Swing Both Ways, Double Adaptor, The Mooney Tunes, Toss the Feathers, Toss the Michael Jnr, The Concordes, S Club Juniors, John Butler Trio Afterparty, Lemon, The Blizzards and too many jazz bands to mention. An American manufactured version of an African djembe was played on main stage with a New Zealand Māori fire twirler in a show produced by the Canadian circus company, Cirque du Soleil, called Allegria, which was filmed in Australia in 2000. In 2008 June, the djembe was featured in the American film "The Visitor", directed by Tim McCarthy, depicting a university professor's unlikely introduction to drum circles through the instruction of a young Syrian drummer. The djembe is very popular in drum circles, and in many circles is the primary instrument, most likely for its easily portable size, wide range of sounds, and its distinct tones. In certain songs using the djembe it replaces a drumset to give it a different feel, such as "Burn One Down" by Ben Harper. The British power electronics band Whitehouse experimented a lot with djembes and other African percussion instruments on their last three albums, and the former member William Bennett later started what he calls the "Afro Noise" Project, in which he attempts to give African percussion instruments an important role in noise music.

Traditionally, as today, in Africa an individual needs to spend many years accompanying his master in ceremonies and other festivities before becoming a real djembefola (djembe player). Today in the communities of the "western civilization" learning to play the djembe generally involves finding a master drummer and having private lessons or lessons for small groups of people. Players generally need to learn the basic sounds and traditional rhythm samples (4/4 and 12/8) to be able to follow classes. Many years of playing and learning are needed to be able to produce a sound that is comparable in its quality to that of a master drummer.

Written transcriptions of rhythms tend to be imprecise. Usually only the basic idea of the rhythm is transcribed but the real feeling that it carries can't be easily put down on paper.[2] This is due to the nature of the West African music - the different types of swing (at least four of them) that are not easily expressible with western notation. For this reason the written material for advanced players is still scarce if not unavailable, while the general and informational literature are readily obtained.

With the advent of musical software such as Percussion Studio, transcribing and reproducing rhythms has become easier. Tools such as this are useful for people who don't have a group to practice with, as individual tracks are able to be isolated or tempo changed to assist with playing along and learning/practising. A competent user is able to reproduce material learnt in a workshop for later use. Notwithstanding its utility as a basic transcription tool percussion studio cannot reproduce the intonation of a skilled player and has limited value, therefore, for transcribing solo.