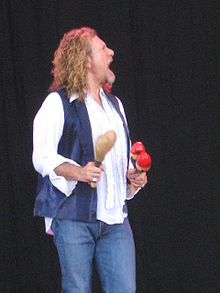 The sound of maracas

pronunciation (help·info), sometimes called rumba shakers) are a native instrument of Latin America. They are a percussion instruments (idiophones), usually played in pairs, consisting of a dried calabash or gourd shell (cuia "cue-ya") or coconut shell filled with seeds or dried beans. They may also be made of leather, wood, or plastic. [1]

Often one ball is pitched high and the other is pitched low. There is evidence of clay maracas used by the natives of Colombia 1500 years ago. The word maraca is thought to have come from the Tupi language of Brazil, where it is pronounced 'ma-ra-KAH'. They are known in Trinidad as shac-shacs.[2]

Although a simple instrument, the method of playing the maracas is not obvious. The seeds must travel some distance before they hit the leather, wood, or plastic, so the player must anticipate the rhythm. One can also strike the maraca against one's hand or leg to get a different sound. Band leader Vincent Lopez hosted a radio program in the early 1950s called Shake the Maracas in which audience members competed for small prizes by playing the instrument with the orchestra.

Maracas are heard in many forms of Latin music and are also used in pop and classical music. They are considered characteristic of the music of Cuba, Puerto Rico, Colombia, Venezuela, Jamaica and Brazil. Maracas are often played at celebrations and special events. In rock and roll, they are probably most identified with Bo Diddley, who wrote the song "Bring it to Jerome" about his maraca player, Jerome Green (who also played maracas for Chuck Berry). Maracas are also very popular with children and are commonly included in the instruments of the rhythm band.