Cowbell (instrument)
This article is about the musical instrument. For bells worn by cows, see cow bell.

The cowbell is an idiophone hand percussion instrument used in various styles of music including salsa and infrequently in popular music. It is named after the similar bell historically used by herdsmen to keep track of the whereabouts of cows. 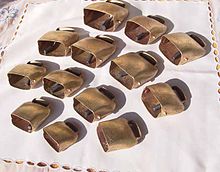 A set of tuned cowbells.

While the cowbell is commonly found in musical contexts, its origin can be traced to freely roaming animals. In order to help identify the herd to which these animals belonged, herdsmen placed these bells around the animal's neck. As the animals moved about the bell would ring, thus making it easier to know of the animal's whereabouts. Though the bells were used on various types of animals, they are typically referred to as "cowbells" due to their extensive use with cattle.[1]

Tuned cowbells or Almglocken, sometimes known as Alpine Bells (Alpenglocken de:Alpenglocken in German), typically refer to bulbous brass bells that are used to play music, sometimes as a novelty act or tourist attraction in the northern Alps, and sometimes in classical music, as in Richard Strauss's Alpine Symphony. Since they are tuned differently to distinguish individual animals, they can be collected "from the pasture" in random tunings, but commercial sets in equal temperament are also available. The metal clapper is retained, and they sound much more noisy than handbells, which are otherwise used similarly in ensembles. Composers who included almglocken among their musical palette include Tōru Takemitsu, Gustav Mahler, Richard Strauss, Roy Harter, John Adams, Joseph Schwantner, and Karlheinz Stockhausen.

Clapperless cowbells made of metal are an important element in Latin-American and go-go music. These cowbells are struck with a stick – the tone being modulated by striking different parts of the bell and by damping with the hand holding the bell.

In several parts of the world (notably in West Africa) pairs or trios of clapperless bells are joined in such a way that they can be struck separately or clashed together. The Brazilian name for these is "agogo" bells. Cylindrical wood blocks played in the same way are also called "Agogô". In Cuban music the cowbell is called cencerro and often played by the same player as the bongos. In Caribbean music two or three are often mounted together with a pair of Timbales.

This type of cowbell can also be played with the foot, using a modified bass drum pedal, or bowed with a double bass bow.

Although cowbells first appeared in American hillbilly music in the 1920s, there are numerous examples of the cowbell as an instrument in more recent popular music. Early pop recording examples include The Chambers Brothers' "Time Has Come Today" and Hugh Masekela's 1968 instrumental "Grazin' in the Grass".[2] The Roland TR-808 drum machine was noted for its distinctive cowbell sound, which sounded almost nothing like an actual cowbell; the sound was highly electronic with a sharp, short decay. Regardless of its lack of realism, the TR-808 cowbell became a popular sound in 1980s R&B and hip hop music, popularized by Jimmy Jam & Terry Lewis-produced artists such as The SOS Band and Janet Jackson. Its distinctive and notorious timbre has enjoyed continued use by hip hop and R&B artists well into the 1990s and 2000s, as well as by bands in other genres such as Skinny Puppy ("Dig It"), the Super Furry Animals ("Juxtaposed With U"), Think Tank ("A Knife & a Fork") and the Dismemberment Plan ("You Are Invited"). DFA Records are noted for using a lot of cowbell in their remixes.

The cowbell gained popular attention as the subject of a famous Saturday Night Live skit popularly known as "More Cowbell." That skit parodied Blue Öyster Cult's "(Don't Fear) The Reaper", one of the more successful pieces of popular music to feature that instrument. The guitar riffs and cowbell drew from Born on the Bayou by Creedence Clearwater Revival.

Though Queens of the Stone Age have also used the cowbell in many songs, the cowbell sound in their 2005 single "Little Sister" was actually achieved using a jam block, but when they performed it on Saturday Night Live, Will Ferrell, dressed like Gene Frenkle from the "More Cowbell" skit, got up on stage and played the jam block part on the cowbell.

Some popular songs where the cowbell has featured prominently include: "Holiday" by Madonna, "Loveshack" by The B-52s,"Low Rider" by War, "Pigs (Three Different Ones)" by Pink Floyd, "Tall Paul" by Annette Funicello, "Daft Punk Is Playing At My House" by LCD Soundsystem, "Electioneering" by Radiohead, "Mississippi Queen" by Mountain, "We're Not Gonna Take It" by Twisted Sister, "Honky Tonk Women" by The Rolling Stones, "Pretty Fly (for a White Guy)", "Why Don't You Get A Job?", and "The Worst Hangover Ever" by The Offspring, "House Of Jealous Lovers" by The Rapture, "Junebug" by The B-52s, "Hair of the Dog" by Nazareth, "Never Been Any Reason" by Head East, "Oowatanite" " by April Wine, Dance the Night Away" by Van Halen, "I'm a Man" by Chicago, "We're An American Band" by Grand Funk Railroad, "A Hard Day's Night", "Drive My Car", I Need You (middle eight) & Everybody's Got Something to Hide Except Me and My Monkey by The Beatles, "You Spin Me Round (Like A Record)" by Dead or Alive, "Never As Good As The First Time" by Sade, "Rock of Ages" by Def Leppard, and "Good Times, Bad Times" by Led Zeppelin. Rage Against The Machine utilized the cowbell in many songs, such as, "Township Rebellion", "Freedom", and "Killing in the Name". Guns N' Roses have often used the cowbell, notably in "Nightrain", "Welcome to the Jungle" and "It's So Easy". Similarly, Queen used a cowbell in such songs as "Liar","Who Needs You", and "Dragon Attack". A cowbell is featured prominently in "Teach Me How to Dougie" by Cali Swag District.[3]. A cowbell is used in both the album and single mix version of (You Drive Me) Crazy by Britney Spears

Cowbells are sometimes popular noisemakers at sporting events, despite attempts to suppress them. While different sports teams seem to have their own story explaining the use of cowbells at their games, it's unlikely that so many teams across varying levels of sports and geographical regions would not have a common cultural reason for the practice. Although the origin of cowbell noisemakers is unclear, the most plausible explanation has to do with early baseball. Baseball games in the 19th Century were often played in cow pastures, as American society was agrarian-based at the time. Cowbells were easily found or taken from around the necks of cows in the pasture and were utilized as noisemakers. The tradition naturally grew to be common practice at various sporting events, not just baseball.[4] In the United States, they are most closely identified with the Columbus (Ohio) Clippers minor league baseball team and Mississippi State University, whose football fans once smuggled in cowbells by the thousands despite a ban on artificial noisemakers by its conference, the Southeastern Conference.[5] New SEC guidelines effective with the 2010 season have now made cowbells legal at Mississippi State, with use limited to pregame, halftime, postgame, timeouts, and after a score.[6] Elsewhere in college football, the cowbell can be found at Penn State and Michigan football games, where it is played with a particular rhythm and accompanying chant.[7]

Worldwide, in cross-country skiing, cowbells are often rung vigorously at the start and finishes of races, to cheer on the racers. They are used by cyclocross fans in much the same way. Cornell ice hockey fans who are also known for their zealous support of their team have cheers that feature use of a cowbell while in Lynah Rink. The San Jose SaberCats of the Arena Football League are also infamous for their fans' use of cowbells. In New Zealand, supporters of the Waikato Rugby Union invariably use cowbells at home matches; this has been carried over to home matches of the Chiefs, the Super Rugby franchise centered on the Waikato region. They are also rung vigorously during cyclo-cross races. During University of New Hampshire ice hockey games, a small group of fans at the base of the student section show their support for the UNH Wildcats with a cowbell. This group also leads the chants and shows their support with posters and other props. The Alaska Aces of the ECHL are known for fans who are encouraged to ring cowbells throughout Sullivan Arena and are well-known in Anchorage as the "Cowbell Crew". Finally the 2006–2007 American Basketball Association (ABA) champion Vermont Frost Heaves have a large cowbell following at their home games.

A small, intrepid band of Toronto Blue Jays fans at Rogers Centre frequently bring cowbells to Blue Jays home games. They are common enough at Tampa Bay Rays home games that the stadium scoreboard graphics crew have a pre-built graphic that says "More Cowbell!!". The Everett Silvertips fans also use cowbells, after the team watched the Saturday Night Live skit while on their tour bus in their inaugural season, and said they wanted the fans to have cowbells. They have a "more cowbell" that sometimes shows on the jumbotron. The Belleville Bulls in the Ontario Hockey League used the skit on their video scoreboard and "More Cowbell" as a catchphrase during the 2007 playoffs. Their goalie Edward Pasquale has several Will Ferrell characters painted on his goalie mask, including the one from the Saturday Night Live skit with the cowbell.

The cowbell has become a tradition for the Melbourne Storm fans in the NRL and is rung by a group of 3 people in a the active supporter bay behind the goals at AAMI Park, as well as a few other people around the ground.