V(D)J recombination, also known as somatic recombination, is a mechanism of genetic recombination in the early stages of immunoglobulin (Ig) and T cell receptors (TCR) production of the immune system. V(D)J recombination nearly-randomly combines Variable, Diverse, and Joining gene segments of vertebrates, and because of its randomness in choosing different genes, is able to diversely encode proteins to match antigens from bacteria, viruses, parasites, dysfunctional cells such as tumor cells,[1] and pollens.

Human antibody molecules (and B cell receptors) comprise heavy and light chains with both constant (C) and variable (V) regions that are encoded by genes on three loci.

Multiple genes for the variable regions are encoded in the human genome that contain three distinct types of segments. For example, the immunoglobulin heavy chain region contains 65 Variable (V) genes[citation needed] plus 27 Diversity (D) genes and 6 Joining (J) genes.[2] The light chains also possess numerous V and J genes, but do not have D genes. By the mechanism of DNA rearrangement of these regional genes it is possible to generate an enormous antibody repertoire; roughly 10^8 combinations are possible, although some are removed due to self reactivity.

Failure of the cell to create a successful product that does not self-react leads to cell apoptosis. 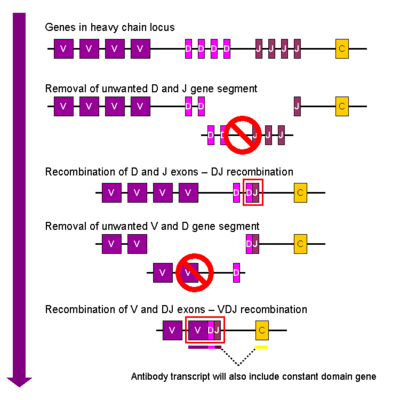 In the developing B cell, the first recombination event to occur is between one D and one J gene segment of the heavy chain locus. Any DNA between these two genes is deleted. This D-J recombination is followed by the joining of one V gene, from a region upstream of the newly formed DJ complex, forming a rearranged VDJ gene. All other genes between V and D segments of the new VDJ gene are now deleted from the cell’s genome. Primary transcript (unspliced RNA) is generated containing the VDJ region of the heavy chain and both the constant mu and delta chains (Cμ and Cδ). (i.e. the primary transcript contains the segments: V-D-J-Cμ-Cδ). The primary RNA is processed to add a polyadenylated (poly-A) tail after the Cμ chain and to remove sequence between the VDJ segment and this constant gene segment. Translation of this mRNA leads to the production of the Ig μ heavy chain protein.

The kappa (κ) and lambda (λ) chains of the immunoglobulin light chain loci rearrange in a very similar way, except the light chains lack a D segment. In other words, the first step of recombination for the light chains involves the joining of the V and J chains to give a VJ complex before the addition of the constant chain gene during primary transcription. Translation of the spliced mRNA for either the kappa or lambda chains results in formation of the Ig κ or Ig λ light chain protein.

Assembly of the Ig μ heavy chain and one of the light chains results in the formation of membrane bound form of the immunoglobulin IgM that is expressed on the surface of the immature B cell.

The rearrangement of the alpha (α) chain of the TCR follows β chain rearrangement, and resembles V-to-J rearrangement described for Ig light chains (see above). The assembly of the β- and α- chains results in formation of the αβ-TCR that is expressed on a majority of T cells.

The regional genes (V, D, J) are flanked by Recombination Signal Sequences (RSSs) that are recognized by a group of enzymes known collectively as the VDJ recombinase. RSSs are composed of seven conserved nucleotides (a heptamer) that reside next to the gene encoding sequence followed by a spacer (containing either 12 or 23 unconserved nucleotides) followed by a conserved nonamer (9 base pairs). The RSSs are present on the 3’ side (downstream) of a V region and the 5’ side (upstream) of the J region. These are the sides that will be involved in the joining. Only a pair of dissimilar spacer RSSs are efficiently recombined (i.e. one with a spacer of 12 nucleotides will be recombined with one that has a spacer containing 23 nucleotides). This is known as the 12/23 rule of recombination (or "one turn/two turn" rule).

VDJ recombinase refers to a collection of enzymes some of which are lymphocyte specific, and some that are expressed in many cell types. The initial steps of VDJ recombination are carried out by critical lymphocyte specific enzymes, called recombination activating gene-1 and -2 (RAG1 and RAG2). These enzymes associate with each other to recognize the RSS sequences and induce DNA cleavage at the RSS sequences. This cleavage only takes place on one strand of DNA, which leads to a nucleotide attack and creation of a hairpin loop.

Other enzymes of the VDJ recombinase are expressed in multiple cell types and are involved in DNA repair following the activity of RAG1 and RAG2. RAG1 is homologous to transposase[3]. One of these enzymes is called the DNA-dependent protein kinase complex (DNA-PK) that repairs double-stranded DNA. DNA-PK binds to each end of the broken DNA and recruits several other proteins, including Artemis nuclease, XRCC4 (X-ray repair cross-complementing factor 4), DNA ligase IV, Cernunnos (also called XLF or XRCC4-like factor), and any of several DNA polymerases. DNA-PK complexes on each DNA end phosphorylate (add phosphate groups to) each other, resulting in activation of Artemis. Artemis then breaks the hairpin loop that was formed by the RAG proteins[4]. XRCC4 and Cernunnos act in concert with DNA-PK to align the two DNA ends with each other, and also help to recruit the enzyme, terminal deoxynucleotidyl transferase (TdT), which adds nucleotides randomly to the ends, providing junctional diversity. DNA polymerases λ and μ insert additional nucleotides as needed to make the two ends compatible for joining. Ligase IV finally links DNA strands on opposite ends of the break to each other, completing the joining process.[5]

Because of the variability in the exact position of cleavage of the hairpin loop by Artemis, as well as the random nucleotide addition by terminal deoxynucleotidyl transferase (TdT), the final DNA sequence, and thus the sequence of the resulting antibody, is highly variable, even when the same two V, D, or J segments are joined. This great diversity allows VDJ recombination to generate antibodies even to microbes that neither the organism nor its ancestors have ever previously encountered.