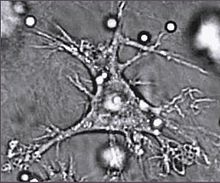 Dendritic cells (DCs) are immune cells forming part of the mammalian immune system. Their main function is to process antigen material and present it on the surface to other cells of the immune system. That is, dendritic cells function as antigen-presenting cells. They act as messengers between the innate and adaptive immunity.

Dendritic cells are present in tissues in contact with the external environment, such as the skin (where there is a specialized dendritic cell type called Langerhans cells) and the inner lining of the nose, lungs, stomach and intestines. They can also be found in an immature state in the blood. Once activated, they migrate to the lymph nodes where they interact with T cells and B cells to initiate and shape the adaptive immune response. At certain development stages they grow branched projections, the dendrites that give the cell its name (δένδρον or déndron being Greek for "tree"). While similar in appearance, these are distinct structures from the dendrites of neurons. Immature dendritic cells are also called veiled cells, as they possess large cytoplasmic 'veils' rather than dendrites.

Dendritic cells were first described by Paul Langerhans (Langerhans cells) in the late nineteenth century. It wasn't until 1973, however, that the term "dendritic cells" was coined by Ralph M. Steinman and Zanvil A. Cohn.[1] For discovering the central role of dendritic cells in the adaptive immune response,[2] Steinman was awarded the Albert Lasker Award for Basic Medical Research in 2007[3] and the Nobel Prize in Physiology or Medicine in 2011.[4]

In all dendritic cells, the similar morphology results in a very large contact surface to their surroundings compared to overall cell volume.

The most common division of dendritic cells is "myeloid" vs. "plasmacytoid":

The markers BDCA-2, BDCA-3, and BDCA-4 can be used to discriminate among the types.[9]

Lymphoid and myeloid DCs evolve from lymphoid or myeloid precursors respectively and thus are of hematopoietic origin. By contrast, follicular dendritic cells (FDC) are probably of mesenchymal rather than hematopoietic origin and do not express MHC class II, but are so named because they are located in lymphoid follicles and have long "dendritic" processes.

In some respects, dendritic cells cultured in vitro do not show the same behaviour or capability as dendritic cells isolated ex vivo. Nonetheless, they are often used for research as they are still much more readily available than genuine DCs.

While humans and non-human primates such as Rhesus macaques appear to have DCs divided into these groups, other species (such as the mouse) have different subdivisions of DCs.

Dendritic cells are derived from hematopoietic bone marrow progenitor cells. These progenitor cells initially transform into immature dendritic cells. These cells are characterized by high endocytic activity and low T-cell activation potential. Immature dendritic cells constantly sample the surrounding environment for pathogens such as viruses and bacteria. This is done through pattern recognition receptors (PRRs) such as the toll-like receptors (TLRs). TLRs recognize specific chemical signatures found on subsets of pathogens. Immature dendritic cells may also phagocyte small quantities of membrane from live own cells, in a process called nibbling. Once they have come into contact with a presentable antigen, they become activated into mature dendritic cells and begin to migrate to the lymph node. Immature dendritic cells phagocytose pathogens and degrade their proteins into small pieces and upon maturation present those fragments at their cell surface using MHC molecules. Simultaneously, they upregulate cell-surface receptors that act as co-receptors in T-cell activation such as CD80 (B7.1), CD86 (B7.2), and CD40 greatly enhancing their ability to activate T-cells. They also upregulate CCR7, a chemotactic receptor that induces the dendritic cell to travel through the blood stream to the spleen or through the lymphatic system to a lymph node. Here they act as antigen-presenting cells: they activate helper T-cells and killer T-cells as well as B-cells by presenting them with antigens derived from the pathogen, alongside non-antigen specific costimulatory signals.

Every helper T-cell is specific to one particular antigen. Only professional antigen-presenting cells (macrophages, B lymphocytes, and dendritic cells) are able to activate a resting helper T-cell when the matching antigen is presented. However, macrophages and B cells can only activate memory T cells whereas dendritic cells can activate both memory and naive T cells, and are the most potent of all the antigen-presenting cells.

As mentioned above, mDC probably arise from monocytes, white blood cells which circulate in the body and, depending on the right signal, can turn into either dendritic cells or macrophages. The monocytes in turn are formed from stem cells in the bone marrow. Monocyte-derived dendritic cells can be generated in vitro from peripheral blood mononuclear cells (PBMCs). Plating of PBMCs in a tissue culture flask permits adherence of monocytes. Treatment of these monocytes with interleukin 4 (IL-4) and granulocyte-macrophage colony stimulating factor (GM-CSF) leads to differentiation to immature dendritic cells (iDCs) in about a week. Subsequent treatment with tumor necrosis factor (TNF) further differentiates the iDCs into mature dendritic cells.

Activated macrophages have a lifespan of only a few days though new evidence suggest that it could be extended to weeks rather than days.[citation needed] The lifespan of activated dendritic cells, while somewhat varying according to type and origin, is of a similar order of magnitude, but immature dendritic cells seem to be able to exist in an inactivated state for much longer.

The exact genesis and development of the different types and subsets of dendritic cells and their interrelationship is only marginally understood at the moment, as dendritic cells are so rare and difficult to isolate that only in recent years they have become subject of focused research. Distinct surface antigens that characterize dendritic cells have only become known from 2000 on; before that, researchers had to work with a 'cocktail' of several antigens which, used in combination, result in isolation of cells with characteristics unique to DCs.

The dendritic cells are constantly in communication with other cells in the body. This communication can take the form of direct cell-to-cell contact based on the interaction of cell-surface proteins. An example of this includes the interaction of the membrane proteins of the B7 family of the dendritic cell with CD28 present on the lymphocyte. However, the cell–cell interaction can also take place at a distance via cytokines.

For example, stimulating dendritic cells in vivo with microbial extracts causes the dendritic cells to rapidly begin producing IL-12.[11] IL-12 is a signal that helps send naive CD4 T cells towards a Th1 phenotype. The ultimate consequence is priming and activation of the immune system for attack against the antigens which the dendritic cell presents on its surface. However, there are differences in the cytokines produced depending on the type of dendritic cell. The lymphoid DC has the ability to produce huge amounts of type-1 IFN's, which recruit more activated macrophages to allow phagocytosis.[12]

HIV, which causes AIDS, can bind to dendritic cells via various receptors expressed on the cell. The best studied example is DC-SIGN (usually on MDC subset 1, but also on other subsets under certain conditions; since not all dendritic cell subsets express DC-SIGN, its exact role in sexual HIV-1 transmission is not clear)[citation needed]. When the dendritic cell takes up HIV and then travels to the lymph node, the virus can be transferred to helper CD4+ T-cells, contributing to the developing infection. This infection of dendritic cells by HIV explains one mechanism by which the virus could persist after prolonged HAART[citation needed]. Many other viruses, such as the SARS virus seems to use DC-SIGN to 'hitchhike' to its target cells.[13] However, most work with virus binding to DC-SIGN expressing cells has been conducted using in vitro derived cells such as moDCs. The physiological role of DC-SIGN in vivo is more difficult to ascertain.

Altered function of dendritic cells is also known to play a major or even key role in allergy and autoimmune diseases like lupus erythematosus and inflammatory bowel diseases (Crohn's disease and ulcerative colitis).[14][15][16]

Dendritic cells in animals other than humans

The above applies to humans. In other organisms, the function of dendritic cells can differ slightly. For example, in brown rats (but not mice), a subset of dendritic cells exists that displays pronounced killer cell-like activity, apparently through its entire lifespan[citation needed]. However, the principal function of dendritic cells as known to date is always to act as an immune sentinel. They survey the body and collect information relevant to the immune system, they are then able to instruct and direct the adaptive arms to respond to challenges.

In addition, an immediate precursor to myeloid and lymphoid dendritic cells of the spleen has been identified.[17] This precursor, termed pre-DC, lacks MHC class II surface expression, and is distinct from monocytes, which primarily give rise to DCs in non-lymphoid tissues.

Although typically described in mammals, dendritic cells have also been found in chickens[18] and turtles.[19]