Natural killer cells (or NK cells) are a type of cytotoxic lymphocyte that constitute a major component of the innate immune system. NK cells play a major role in the rejection of tumors and cells infected by viruses. They kill cells by releasing small cytoplasmic granules of proteins called perforin and granzyme that cause the target cell to die by apoptosis (programmed cell death).

NK cells are defined as large granular lymphocytes (LGL) and constitute the third kind of cells differentiated from the common lymphoid progenitor generating B and T lymphocytes.[1] They do not express T-cell antigen receptors (TCR) or Pan T marker CD3 or surface immunoglobulins (Ig) B cell receptors but they usually express the surface markers CD16 (FcγRIII) and CD56 in humans, NK1.1 or NK1.2 in C57BL/6 mice. Up to 80% of human NK cells also express CD8.

They were named "natural killers" because of the initial notion that they do not require activation in order to kill cells that are missing "self" markers of major histocompatibility complex (MHC) class I.

They are distinct from Natural Killer T cells.

Given their strong cytolytic activity and the potential for auto-reactivity, NK cell activity is tightly regulated. NK cells must receive an activating signal, which can come in a variety of forms, the most important of which are listed below.

The cytokines play a crucial role in NK cell activation. As these are stress molecules released by cells upon viral infection, they serve to signal to the NK cell the presence of viral pathogens. Cytokines involved in NK activation include IL-12, IL-15, IL-18, IL-2, and CCL5.

NK cells, along with macrophages and several other cell types, express the Fc receptor (FcR) molecule (FC-gamma-RIII = CD16), an activating biochemical receptor that binds the Fc portion of antibodies. This allows NK cells to target cells against which a humoral response has been mobilized and to lyse cells through Antibody-dependent cellular cytotoxicity (ADCC).

Aside from the Fc receptor, NK cells express a variety of receptors that serve either to activate or to suppress their cytolytic activity. These receptors bind to various ligands on target cells, both endogenous and exogenous, and have an important role in regulating the NK cell response. 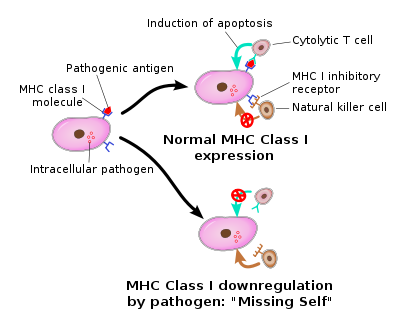 NK cells are cytotoxic; small granules in their cytoplasm contain proteins such as perforin and proteases known as granzymes. Upon release in close proximity to a cell slated for killing, perforin forms pores in the cell membrane of the target cell, creating an aqueous channel through which the granzymes and associated molecules can enter, inducing either apoptosis or osmotic cell lysis. The distinction between apoptosis and cell lysis is important in immunology: lysing a virus-infected cell would only release the virions, whereas apoptosis leads to destruction of the virus inside.

NK cells are activated in response to interferons or macrophage-derived cytokines. They serve to contain viral infections while the adaptive immune response is generating antigen-specific cytotoxic T cells that can clear the infection. Patients deficient in NK cells prove to be highly susceptible to early phases of herpes virus infection.

In order for NK cells to defend the body against viruses and other pathogens, they require mechanisms that enable the determination of whether a cell is infected or not. The exact mechanisms remain the subject of current investigation, but recognition of an "altered self" state is thought to be involved. To control their cytotoxic activity, NK cells possess two types of surface receptors: activating receptors and inhibitory receptors. Most of these receptors are not unique to NK cells and can be present in some T cell subsets as well.

These inhibitory receptors recognize MHC class I alleles, which could explain why NK cells kill cells possessing low levels of MHC class I molecules. This inhibition is crucial to the role played by NK cells. MHC class I molecules consist of the main mechanism by which cells display viral or tumor antigens to cytotoxic T-cells. A common evolutionary adaption to this seen in both intracellular microbes and tumours is a chronic down-regulation of these MHC I molecules, rendering the cell impervious to T-cell mediated immunity. It is believed that NK cells, in turn, evolved as an evolutionary response to this adaption, as the loss of the MHC would deprive these cells of the inhibitory effect of MHC and render these cells vulnerable to NK cell mediated apoptosis.

NK cell receptor types (with inhibitory as well as some activating members) are differentiated by structure:

In early experiments on cell-mediated cytotoxicity against tumor target cells, both in cancer patients and animal models, investigators consistently observed what was termed a "natural" reactivity, that is, a certain population of cells seemed to be able to lyse tumor cells without having been previously sensitized to them. As these discoveries were incompatible with the established model at the time, many initially considered that these observations were artifacts.[2] However, by 1973, 'natural killing' activity was established across a wide variety of species, and the existence of a separate lineage of cells possessing this ability was postulated.

The discovery that a unique type of lymphocyte was responsible for “natural” or spontaneous cytotoxicity was made in the early 1970s by doctoral student Rolf Kiessling and post-doctoral fellow Hugh Pross, in the mouse,[3] and by Hugh Pross and doctoral student Mikael Jondal in the human. [4][5] The mouse and human work was carried out under the supervision of professors Eva Klein and Hans Wigzell, respectively, of the Karolinska Institute, Stockholm. Kiessling’s research involved the well-characterized ability of T-lymphocytes to lyse tumor cells against which they had been previously immunized. Pross and Jondal were studying cell-mediated cytotoxicity in normal human blood and the effect of the removal of various receptor-bearing cells on this cytotoxicity. Later that same year Ronald Herberman published similar data with respect to the unique nature of the mouse effector cell. [6] The human data were confirmed, for the most part, by West et al.[7] using similar techniques and the same erythroleukemic target cell line, K562. K562 is highly sensitive to lysis by human NK cells and, over the decades, the K562 51Chromium-release assay has become the most commonly used assay to detect human NK functional activity.[8] Its almost universal use has meant that experimental data can be compared easily by different laboratories around the world.

Using discontinuous density centrifugation and, later, monoclonal antibodies, natural killing ability was mapped to the subset of large, granular lymphocytes known today as NK cells. The demonstration that density gradient-isolated large granular lymphocytes were responsible for human NK activity, made by Timonen and Saksela in 1980,[9] was the first time that NK cells had been visualized microscopically and was a major breakthrough in the field.

The cells were named "natural killer" because of the initial notion that they do not require activation in order to kill cells that are "missing-self" recognition ("missing-self" recognition is a term used to describe cells with low levels of MHC class I cell surface marker molecules — a situation that could arise due to viral infection, or in tumors under strong selection pressure of killer T cells).

With the discovery of activating receptors almost two decades after the discovery of the inhibitory receptors these cells continue to be called by the same name, though “natural” no longer means the same thing. The term “natural killer” continues to be justified by: