Shepherd Neame is an English regional brewery founded in 1698 by Richard Marsh in Faversham, Kent.[2] It is a family owned brewery that produces a range of cask ales and filtered beers. Production is around 230,000 barrels a year. It owns around 360 pubs, predominantly in Kent, London and southeastern England.

The family of Neame were relative latecomers in the overall development of the Shepherd Neame Brewery but, as substantial property owners in the district, Charles Neame of Harefield Court and John Neame of Selling Court were acknowledged to be among the most valuable hop growers in East Kent. Theo Barker explains in the official account of the Brewery, that it all began with a Captain Richard Marsh who in 1678 is recorded in the Faversham Wardmote Books as contributing by far the largest of the ‘Brewers Fines’ made at that date.

Shepherd Neame as such is reported as having been established in 1698, in an advertisement of the Kentish Gazette for the 11 April 1865. Richard Marsh lived until 1727 when his Brewery was bequeathed to his widow, and then to his daughter, who sold the property on to Samuel Shepherd around 1741.

Samuel Shepherd was from Deal, Kent. He had an interest in malting when he moved to Faversham around 1730 and had established himself as a Brewer of Malt by 1734. Shepherd expanded on his interest, through acquiring a number of public houses, but it was his son Julius Shepherd who extended this trend still further upon his inheritance of the Brewery in 1770, when the company held four such outlets. 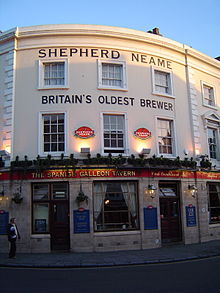 The Spanish Galleon Tavern in Greenwich

In 1789 he set about modernising the process of malt grinding and pumping, which had been previously worked with the employment of horses, by introducing what was reputed to be the first steam engine (Boulton and Watt) to be used for this purpose outside of London, and was then able to describe his business as the Faversham Steam Brewery.

Henry, his second son, born in 1780, continued the family tradition, and raised his son of the same name into the business. It was this Henry Shepherd (1816~77) who was to be the last of the Shepherds actively involved in the Company.

The death of Henry senior at the age of 82 occurred in 1862 and although his own son was not a business man of the same determination, the firm’s expansion continued adequately with John Mares, who had come to the financial assistance of the Shepherd Brewery during the recession of the mid-1840s and continued as the impetus behind Shepherd and Mares until Percy Beale Neame joined the Brewery in 1864.

Mares had seen the potential of the Brewery’s growth with the arrival of the long delayed railway service in 1858. He pressed the firm to actively prepare for such growth.

Horse drawn drays were used to carry the Brewery’s ales throughout Kent, and malts were imported by barge at Faversham Creek at its own wharf which was also used as the means to deliver its product to London, until the 1850s when steamboats were beginning to prove more expeditious to the task. The railways soon even outpaced and replaced the steamboats.

Mares' unexpected death at the age of 45 in 1864 placed Percy Neame, at the age of 28, as the stronger partner with Henry Shepherd, and with the challenge left to him in Mares' successful expansion programme he brought the Faversham Brewery well into the Neame family's dominion.

The brewery itself is located very near to Faversham town centre, and it is possible to smell the brewing processes regularly in the town and surrounding streets.

Spitfire is Shepherd Neame's biggest-selling cask conditioned ale. It is a 4.2% abv bitter, first brewed as a bottled beer (4.5% abv) to commemorate the 50th anniversary of the Battle of Britain in 1990.[3] The beer is named after the legendary Supermarine Spitfire aircraft designed by R. J. Mitchell. The brand is promoted by award-winning World War II themed advertising.[4]

Shepherd Neame produces two brewery-conditioned draught beers – sometimes known as keg ales – which are brewed in exactly the same way as traditional, cask beers but filtered before being put into pressurised kegs. This ensures consistency of taste, and is the preferred option in bars where there is limited, or no, cellar space.

Shepherd Neame also produces a variety of ales for Asda under its 'Extra Special' range. These include Gentleman Jack, a nut brown premium ale with a fruity hop aroma and bitter flavour notes.

The brewery also produces a range of lagers, mainly under licence, such as Holsten Export, Oranjeboom, Asahi, Hürlimann and Kingfisher, but also their own brand Steinbock. These are served on draught in the brewery's pubs and receive more frontage than non-brewery brands.

The brewery owns around 360 pubs and establishments, mostly in Kent, but some extending into London and Essex. These are predominantly tenanted public houses situated in towns and villages. The brewery also manages its own chain of hotels, including The Royal Albion in Broadstairs and The George Hotel in Cranbrook. The pubs managed and owned by Shepherd Neame exclusively sell its own brands of beer, lager, wine and spirits. Other brewery products are rare and are usually confined to stouts such as Guinness and cider such as Strongbow. The brewery's own brands are typically given prominence in terms of frontage with extensive branding. All fonts and pumps bear the distinctive logos and branding, glasses are branded and bar runners that advertise the house beers are commonplace.