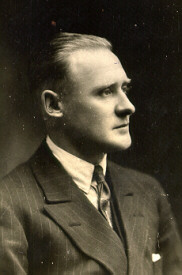 Reginald Joseph Mitchell CBE, FRAeS, (, - , ) was an aeronautical engineer, best known for his design of the .

R.J. Mitchell was born at 115 Congleton Road, , , , . [ [http://www.bbc.co.uk/stoke/local_heroes/g_m/mitchell.shtml R.J. Mitchell] ] After leaving Hanley High School at the age of 16 he gained an at Kerr Stuart & Co. of Fenton, a engineering works.

In 1917, he joined the Supermarine Aviation Works at . Advancing quickly within the company, Mitchell was appointed Chief Designer in 1919. He was made Chief Engineer in 1920 and Technical Director in 1927. He was so highly regarded that, when took over Supermarine in 1928, one of the conditions was that Mitchell stay as a designer for the next five years.

Between 1920 and 1936, Mitchell designed 24 aircraft including light aircraft, fighters, bombers, several seaplanes and flying boats such as the . However, he is best remembered for his work on the Supermarine series of racing aircraft culminating in the and the .

The S.6B won the in 1931 and later broke the world air speed record. Mitchell was awarded the CBE in 1932 for his contribution to high-speed flight. Mitchell's experience with high speed aircraft such as the S6B prompted the to issue specification F7/30 to Supermarine, primarily a seaplane manufacturer, for the design of a new fighter aircraft.

On , , Mitchell submitted his Type 224 design. Mitchell referred to the Type 224 as "The Shrew". It first flew on , , but was eventually rejected by the RAF because of its unsatisfactory performance. While the 224 was being built, Mitchell was authorised by Supermarine in 1933 to proceed with a new design, the Type 300, an all-metal that would become the . This was originally a private venture by Supermarine, but the RAF quickly became interested and the Air Ministry financed a prototype.

Many of the technical advances in the Spitfire had been made by others: the thin elliptical wings were similar to those of the Beverley Shenstone, the under-wing radiators had been pioneered at the RAE, while construction had been first developed in the . Mitchell's genius was bringing it all together with his experience of high speed flight and the Type 224.

The first prototype Spitfire, "K5054", (left) flew for the first time on , at , . In later tests, it reached 349 mph, consequently, before the prototype had completed its official trials, the RAF ordered 310 production Spitfires. Mitchell is reported to have said that "Spitfire" was "just the sort of bloody silly name they would choose." [Deighton 1977, p. 99.]

Late in 1933, Mitchell underwent a to treat . Despite this, he continued to work, not only on the Spitfire, but also on a four-engined bomber, the . Unusual for an aircraft designer in those days, he took flying lessons and got his pilot's licence in July 1934.

In 1936, he was diagnosed with cancer again. Mitchell gave up work in early 1937, though he was often seen watching the Spitfire being tested. He went to the American Foundation in for a month, but died in June 1937. His life and the sacrifices he made to keep going despite pain and impending death were the subject of the 1942 Leslie Howard film "". The film created some myths. In particular, Mitchell did not work himself to death; he led a full life, and was working mainly on the bomber project in his final years.

Mitchell was succeeded as Chief Designer at Supermarine by Joseph Smith, who was responsible for the further development of the Spitfire. Nevertheless, Mitchell's design was so sound that the Spitfire could be continually improved throughout the , whereas its contemporary, the , quickly became obsolete. Over 22,000 Spitfires and derivatives were built.

In 1918, Mitchell married Florence Dayson. They had a son, Gordon. While working on the Spitfire at Woolston and Eastleigh, Mitchell and family lived in , Southampton, at 2 Russell Place [ [http://nds.coi.gov.uk/content/detail.asp?ReleaseID=169119&NewsAreaID=259 English Heritage press release] &mdash; Designer of the Spitfire commemorated with Blue Plaque] .Eventually Mitchell was diagnosed with rectal cancer, and in August 1933 had a colostomy. In 1936, Mitchell's cancer returned and he died on at age 42.

Mitchell's son Dr. Gordon Mitchell was left to tell his father's story in two books "R.J. Mitchell - World Famous Aircraft Designer" and "R.J.Mitchell -Schooldays to Spitfire". In 1946 Gordon married Alison Barrow and they had three children: David, Adrian and Penny. They spent the majority of their life in Tilehurst, Reading. On , Alison died after a long illness. Gordon Mitchell now lives alone in the heart of the Cotswolds.

In the late-1980s Gordon's daughter Penny gave birth to two children, Nick and Emma. In September 2005, all of Mitchell's family went to London to watch the dedication of a statue made by Stephen Kettle that was displayed in the Science Museum until January 2008.