Deal is a town in Kent England. It lies on the English Channel eight miles north-east of Dover and eight miles south of Ramsgate. It is a former fishing, mining and garrison town. Closely associated with Deal are the villages of Kingsdown, Sholden and Walmer, the latter being where Julius Caesar first arrived in Britain (according to the best guess by historians).

Deal was named as a 'limb port' of the Cinque Ports in 1278. Due to its position on the Downs, the town grew to become for a while the busiest port in England; today it enjoys the reputation of being a quiet seaside resort, its quaint streets and houses the only reminder of its fascinating history. The coast of France is approximately twenty-five miles from the town, and is visible on clear days.

Its finest building is the Tudor Deal Castle, commissioned by King Henry VIII and designed with an attractive rose floor plan.

The proximity of Deal's shoreline to the notorious Goodwin Sands has made its coastal waters a source of both shelter and danger through the history of sea travel in British waters. The Downs, the water between the town and the sands, provides a naturally sheltered anchorage. This allowed the town to become a significant shipping and military port in past centuries despite the absence of a harbour, with transit of goods and people from ship to shore conducted using smaller tender craft. Deal was, for example, visited by Nelson and was the first English soil on which James Cook set foot in 1771 on returning from first voyage to Australia. The anchorage is still used today by international and regional shipping, though on a scale far smaller than at other times in the past (some historical accounts report hundreds of ships being visible from the beach).

By the time Dickens came to Deal it had been largely forgotten how the government of 1784, under Prime Minister William Pitt the Younger (who was staying at nearby Walmer Castle, and was later to be appointed Lord Warden of the Cinque Ports in 1792), ensured that the Deal boats were all set ablaze, suspecting some of the Deal luggers of being engaged in smuggling. Pitt had awaited an opportunity that January, when the boats were all 'hoved up' on the beach on account of bad weather, to send a regiment of soldiers to smash and burn them. A naval cutter was positioned offshore to prevent any of the boatmen escaping.

The boatmen's ancestors had the right, under charter, freely to import goods in return for their services as Cinque Port men in providing what had been long recognised as the sole naval defence of the realm. These men continued to risk their lives and their boats, in saving the lives of shipwreck victims.

The irrepressible spirit of the Deal boatmen remained undaunted by these events throughout the Napoleonic Wars, and they continued to assert their hard-earned right to trade.

From these activities news of the events unfolding in France would reach England quickly and regularly, with about 400 men making a living off Deal beach at that time. The war only made the boatmen’s efforts more profitable, so that afterwards the Government immediately turned a part of its naval blockade into a coastal blockade, which lasted from 1818 to 1831.

Deal had a naval shipyard which provided Deal with much of its trade. On the site of the yard there is now a building originally used as a semaphore tower, and later used as a coastguard house, then as a timeball tower, which it remains today, and as a museum. Besides this and the Deal Maritime Museum, there is no museum of the town's history yet, though a campaign to start one is ongoing - Deal's history is told at Dover Museum instead.

The first home of the Royal Marines in Kent was established at Chatham in 1755. Because of its proximity to the continent and the fact that it possessed a thriving naval dockyard, Deal has been closely associated with the corps ever since its foundation. Records from the old Navy yard at Deal exist from 1658 and show that Marines from Chatham and Woolwich were on duty in Deal, and quartered in the town, until the Deal depot was established in 1861.

Deal Barracks has become known over its long history as the Royal Marine School of Music, the barracks at Walmer consisting of the North, East and South (or Cavalry) barracks, and all were constructed shortly after the outbreak of the French revolution.

Part of the South barracks was used from 1815 as the quarters for the 'blockade men', drafted against a threat of local smuggling. The South barracks became a coastguard station thereafter, and this duty continued until 1840.

During 1940, at St. Margaret's Bay, close to Deal, the Royal Marines Siege Regiment came into being and manned cross-channel guns for most of the remainder of the war.

On 29 October, a Home Security Report detailed in the RAF's Campaign Diary was made:

"Army Stations 29thU October 1940 Deal: At 1640 hours three HE bombs were dropped in the barracks, the casualties being 1 Officer and 7 other ranks killed, 6 Officers and 6 other ranks wounded."

These casualties are buried in the Hamilton Road Cemetery, Deal, Kent. Ironically, they rest next to the joint grave of three Luftwaffe bomber crew who died just fourteen days later when their aircraft crashed near Kingsdown.

At approximately 8:20 am on 22 September 1989, the Royal Marines School of Music was bombed by the IRA, resulting in the death of 11 bandsmen, and injury to 22 other marines. The memorial garden is situated in the grounds of the old barracks where the bomb went off. This was built in remembrance of the 11 that died and was then restored after an arson attack a number of years ago. Every year the families and friends of those that died join together at the garden to pay their respects and lay flowers in a memorial service.

On the evening of 26 March 1996, the Deal populace were privy to a special ceremony, the Beating Retreat, coming from the South barracks, as the Royal Marines Band Service were commanded to vacate their ancient Kent depot and move to new quarters at Portsmouth. The Marines every year come up to the bandstand and put on a display which attracts well over 4,000 people. 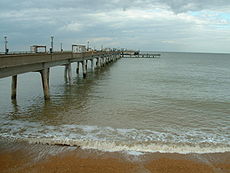 The seafront at Deal has been adorned with three separate piers in the town's history. The first, built in 1838, was designed by Sir John Rennie. After its wooden structure was destroyed in an 1857 gale, it was replaced by an iron pier in 1864. A popular pleasure pier, it survived until the Second World War, when it was struck and severely damaged by a mined Dutch ship, the Nora, in January 1940. This was not the first time the pier had been hit by shipping, with previous impacts in 1873 and 1884 necessitating extensive repairs.

The present pier, designed by Sir W. Halcrow & Partners, was opened on 19 November 1957 by the Duke of Edinburgh. Constructed predominantly from concrete-clad steel, it is 1026 ft (311 m) in length (a notice announces that it is the same length as the RMS Titanic, but that ship was just 882 feet in length), and ends in a three-tiered pier-head, featuring a cafe, bar, lounge, and fishing decks. The lowest of the three tiers is underwater at all but the lowest part of the tidal range, and has become disused. The pier is a popular sport fishing venue.

Deal's current pier is the last remaining fully intact leisure pier in Kent. Its structure was extensively refurbished and repaired in 1997, with work including the replacement of much of the concrete cladding on the pier's main piles. Work began in April 2008 to construct a new pier-head with a modern restaurant, with the restaurant opened in December 2008.[1]

Deal has several museums; all are related to Deal's maritime history. Both Deal Castle and Walmer Castle are operated by English Heritage - Deal has a display on the events in the reign of Henry VIII that led to the invasion threat which caused its construction, along with some material on its subsequent history, whereas displays at Walmer concentrate on Walmer's post-Tudor role as the Lord Warden's residence. There is also a ruin of the third Tudor castle, Sandown Castle, in North Deal. The Deal Maritime and Local History Museum has exhibits of boats, smuggler galleys and model naval ships. It also contains extensive histories of the lifeboats as well as local parish registers. The Timeball Tower Museum, on the other hand, focuses on the importance of timekeeping for ships, and the role the building it occupies played. Deal Maritime and Local History Museum is currently closed due to a dispute over a fence (reference link not allowed by wikipedia).

During the 19th century, Charles Dickens was to comment on the character of the East Kent boatmen, and on one of his visits to Deal (later used for an episode in Bleak House) he wrote:

Earlier descriptions of Deal were much less favourable, with the town notorious in the 17th century as a location for smugglers. Daniel Defoe wrote of the town:

Diarist Samuel Pepys recorded several visits to the town, being moved on 30 April 1660 to describe it as "pitiful".[2]

William Cobbett passing through in September 1823 noted in his book Rural Rides:

The seafront, with the time ball tower left of centre

Dickens, who had visited the town, had Richard Carstone garrisoned here in chapter XLV of Bleak House, so that Woodcourt and Esther's paths can cross when Woodcourt's ship happens to anchor in the Downs at the same time as Esther and Ada are visiting Richard:

In Jane Austen's Persuasion, chapter 8, the town is mentioned as the only place where Admiral Croft's wife Sophia Croft was ever ill, as it was the only place she was ever separated from him, whilst he was patrolling the North Sea:

Deal has two paid for newspapers, the Deal and Sandwich Express (published by Kent Regional News and Media) and the East Kent Mercury (published by the KM Group. Free newspapers for the town include the Dover Extra, part of the KM Group; and yourdeal, part of KOS Media.

The local radio station for Deal is KMFM Shepway and White Cliffs Country. Deal is also served by the county-wide stations Heart, Gold and BBC Radio Kent. Deal is also covered by Podcasting service Dover Community Radio[3] who cover Dover District with local podcasts on their website. They hope to create a district-wide internet based radio station in the future leading to a community licence.