List of films and television shows set in Miami

List of films and television shows set in Miami

The city of Miami, United States, is a popular location for the filming and setting of movies and television shows, both fictional and non-fictional. The following article provides a list of films and television shows which have been partially or wholly set in or shot in Miami. The list includes a wide array of films and TV shows, ranging from those that were almost entirely shot and set in the city (e.g., The Golden Girls and Miami Vice) to those where only a small number of scenes where set or shot in Miami (e.g., Lost and Thunderball). 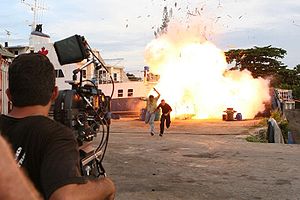 Because of the climate and the high sunshine amounts, Florida has long been a favoured location for film makers. The early silent film industry in the state rivalled Hollywood in production. Film in Florida is still a major industry in the state, with Florida ranking third in the U.S. for film production (after California and New York, respectively) based on revenue generated (according to 2006 Florida Film Commission Data). In particular, Miami has long been a popular locale in the state for filming and continues to grow as the entertainment industry expands throughout Florida.[citation needed]

Worldwide, Miami is one of the largest production and distribution centers in the world for the film, television, commercial advertising, still photo, music and new media industries. The industry’s combined economic impact in the local economy is about two billion dollars annually, with $100 to $150 million coming from more than 1,000 location filming shoots each year. There are approximately 3,000 companies working in film and entertainment in Miami-Dade County, employing an estimated 15,000 workers.[citation needed]

Miami's large Hispanic population and close proximity to Latin America have made Miami a center for Latin television and film production. As a result, many Spanish-language programs are filmed in Miami's numerous television production studios, predominantly in Hialeah and Doral. These include gameshows, news programs, reality shows, telenovelas, and variety shows.

English language films set in or shot in Miami

Spanish language films set in or shot in Miami

English language television series set in or shot in Miami

Spanish language television series set in or shot in Miami

In keeping with its modern music tradition, the city has hosted a number of music awards shows.