A Hole in the Head

A Hole in the Head

Infobox Film
name = A Hole in the Head 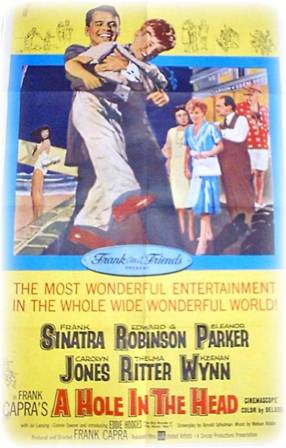 "A Hole in the Head" (1959) [ [http://www.imdb.com/title/tt0052896/ IMDB listing] ] is a directed by and featuring , , , , , , and . The film introduced the song "High Hopes", a Sinatra standard used as a campaign song during the presidential election the following year. [ [http://www.jfklibrary.org/Historical+Resources/Archives/Reference+Desk/High+Hopes+Lyrics.htm John F. Kennedy Presidential Library & Museum] ] Wynn plays a character based on who agrees to go into a partnership with Sinatra's character to build an amusement park in Florida (the film predates )—until he notices that Sinatra seems too desperate as he cheers for a dog upon which he'd bet heavily. The movie ends with Tony, Eloise and Alley singing "High Hopes" on the beach.

The screenplay was adapted by playwright , whose father was the operator of a hotel. The protagonist of "A Hole in the Head" is a Miami hotel operator.