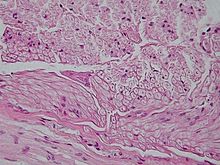 Nervous tissue is one of four major classes of vertebrate tissue.

Nervous tissue is the main component of the nervous system - the brain, spinal cord, and nerves-which regulates and controls body functions. It is composed of neurons, which transmit impulses, and the neuroglia cells, which assist propagation of the nerve impulse as well as provide nutrients to the neuron.

Nervous tissue is made of nerve cells that come in many varieties, all of which are distinctly characteristic by the axon or long stem like part of the cell that sends action potential signals to the next cell.

Functions of the nervous system are sensory input, integration, controls of muscles and glands, homeostasis, and mental activity.

All living cells have the ability to react to stimuli. Nervous tissue is specialized to react to stimuli and to conduct impulses to various organs in the body which bring about a response to the stimulus. Nerve tissue (as in the brain, spinal cord and peripheral nerves that branch throughout the body) are all made up of specialized nerve cells called neurons. Neurons are easily stimulated and transmit impulses very rapidly. A nerve is made up of many nerve cell fibers (neurons) bound together by connective tissue. A sheath of dense connective tissue, the epineurium surrounds the nerve. This sheath penetrates the nerve to form the perineurium which surrounds bundles of nerve fibers. Blood vessels of various sizes can be seen in the epineurium. The endoneurium, which consists of a thin layer of loose connective tissue, surrounds the individual nerve fibers.

The cell body is enclosed by a cell (plasma) membrane and has a central nucleus. Granules called Nissl bodies are found in the cytoplasm of the cell body. Within the cell body, extremely fine neurofibrils extend from the dendrites into the axon. The axon is surrounded by the myelin sheath, which forms a whitish, non-cellular, fatty layer around the axon. Outside the myelin sheath is a cellular layer called the neurilemma or sheath of Schwann cells. The myelin sheath together with the neurilemma is also known as the medullary sheath. This medullary sheath is interrupted at intervals by the nodes of Ranvier.

Nerve cells are functionally made to each other at a junction known as a synapse, where the terminal branches of an axon and the dendrites of another neuron lie close to each other but normally without direct contact. Information is transmitted across the gap by chemical secretions called neurotransmitters. It causes activation in the post-synaptic cell. All cells possess the ability to respond to stimuli. The messages carried by the nervous system are electrical signals called impulses.

Neurons are classified both structurally and functionally.

Structural Classification Neurons are grouped structurally according to the number of processes extending from their cell body. Three major neuron groups make up this classification: multipolar (polar = end, pole), bipolar and unipolar neurons.

Multipolar Neurons (3+ processes)
These are the most common neuron type in humans (more than 99% of neurons belong to this class) and the major neuron type in the CNS
Bipolar Neurons
Bipolar neurons are spindle-shaped, with a dendrite at one end and an axon at the other. An example can be found in the light-sensitive retina of the eye.
Unipolar Neurons
Sensory neurons have only a single process or fibre which divides close to the cell body into two main branches (axon and dendrite). Because of their structure they are often referred to as unipolar neurons.

Tumors in nervous tissue include: