Neurofibromatosis (commonly abbreviated NF; neurofibromatosis type 1 is also known as von Recklinghausen disease) is a genetically-inherited disorder in which the nerve tissue grows tumors (neurofibromas) that may be benign or may cause serious damage by compressing nerves and other tissues. The disorder affects all neural crest cells (Schwann cells, melanocytes and endoneurial fibroblasts). Cellular elements from these cell types proliferate excessively throughout the body, forming tumors; melanocytes also function abnormally in this disease, resulting in disordered skin pigmentation and "cafe-au-lait" spots. The tumors may cause bumps under the skin, colored spots, skeletal problems, pressure on spinal nerve roots, and other neurological problems.[1][2]

Neurofibromatosis is an autosomal dominant disorder, which means only one copy of the affected gene is needed for the disorder to develop. Therefore, if only one parent has neurofibromatosis, his or her children have a 50% chance of developing the condition as well. The severity in affected individuals can vary, this may be due to variable expressivity. Approximately half of cases are due to de novo mutations and no other affected family members are seen. It affects males and females equally. 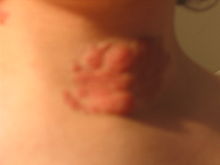 Patient with multiple small cutaneous neurofibromas and a 'café au lait spot' (bottom of photo, to the right of centre). A biopsy has been taken of one of the lesions.
Main article: Neurofibromatosis type I

Neurofibromatosis type 1 (also known as "von Recklinghausen disease"[1]) is the most common form of NF, accounting for up to 90% of the cases. NF 1 has a disorder frequency of 1 in 4,000, making it more common than neurofibromatosis type 2, with a frequency of 1 in 45,000 people.[3] It occurs following the mutation of neurofibromin on chromosome 17q11.2. 100,000 Americans have neurofibromatosis. Neurofibromin is a tumor suppressor gene whose function is to inhibit the p21 ras oncoprotein.[3] In absence of this tumor suppressor's inhibitory control on the ras oncoprotein, cellular proliferation is erratic and uncontrolled, resulting in unbalanced cellular proliferation and tumor development. The diagnosis of NF1 is made if any two of the following seven criteria are met:

Neurofibromatosis type 2 (also called "central neurofibromatosis"[1]) is the result of mutation of the merlin (also known as "schwannomin"[1]) in chromosome 22q12. It accounts for only 10% of all cases of NF, and its frequency is lower than NF1. It is also caused by a mutation in a tumor suppressor gene NF2 (whose gene product is schwannomin or merlin). The normal function of merlin is not well understood.[3] The disorder manifests in the following fashion:

NF 2 increases the risk of meningiomas and ependymomas.[3]

Schwannomatosis - mutation in both chromosomes 17 and 22

One must keep in mind, however, that neurofibromatosis can occur in or affect any of the organ systems, whether that entails simply compressing them (from tumor growth) or in fact altering the organs in some fundamental way. This disparity in the disorder is one of many factors that makes it difficult to diagnose, and eventually find a prognosis for.

Neurofibromatosis is considered a member of the neurocutaneous syndromes (phakomatoses).[2] In addition to the types of neurofibromatosis, the phakomatoses also include tuberous sclerosis, Sturge-Weber syndrome and von Hippel-Lindau disease. This grouping is an artifact of an earlier time in medicine, before the distinct genetic basis of each of these diseases was understood.

Patients with neurofibromatosis can be affected in many different ways. Morbidity is often a result of plexiform neuromas, optic gliomas, or acoustic neuromas, but mortality can also be associated with malignant transformation of the neuromas, such as neurofibrosarcomas[1] (often there is a malignant transformation in less than 3% of the cases of NF1[3]). There is a high incidence of learning disabilities or cognitive deficit[1][5] in patients with NF, particularly NF-1, however severe retardation is not part of the syndrome. Because of the tumor generating nature of the disorder and its involvement of the nervous system and also because of early onset macrocephaly in the pediatric population, there is often an increased chance of development of epilepsy in those affected. Neurofibromatosis also increases the risk of leukemia particularly in children; Children with NF-1 have 200 to 500 times the normal risk of developing leukemia compared to the general population.[1] Since the tumors grow where there are nerves, they can also grow in areas that are visible, causing considerable social suffering for those affected. The tumors can also grow in places that can cause other medical issues that may require them to be removed for the patient's safety.[6] Affected individuals may need multiple surgeries (such as reduction surgery, or Gamma knife surgery), depending on where the tumors are located. For instance, those affected with NF 2 might benefit from a surgical decompression of the vestibular tumors to prevent deafness.[2]

For embryos produced via in vitro fertilisation, it is possible via preimplantation genetic diagnosis (PGD) to screen for NF-1.[7]

"PGD has about 95-98% accuracy but requires that the partner with NF2 have a recognizeable genetic mutation, which is only the case for about 60% of people with a clinical diagnosis of NF2. Having the initial genetic testing to determine if the mutation is recognizeable takes approximately 6 months, and then preparing the probes for the PDG testing takes approximately another 6 months."[8]

PGD can not be used to detect Schwannomatosis‎, because the gene for it has not yet been identified.[9]

Chorionic villus sampling or amniocentesis can be used:[10] 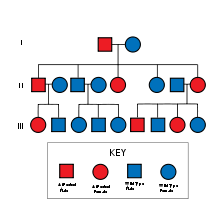 NF-1 and NF-2 may be inherited in an autosomal dominant fashion, as well as through random mutation.

Both NF-1 and NF-2 are autosomal dominant disorders, meaning only one copy of the mutated gene need be inherited to pass the disorder. A child of a parent with NF-1 or NF-2 and an unaffected parent will have a 50%-100% chance of inheriting the disorder, depending on whether the affected parent is heterozygous (Aa) or homozygous (AA) for the trait ("A" depicts the affected dominant allele, while "a" depics the recessive allele).

Complicating the question of heritability is the distinction between genotype and phenotype, that is, between the genetics and the actual manifestation of the disorder. In the case of NF1, no clear links between genotype and phenotype have been found, and the severity and the specific nature of the symptoms may vary widely among family members with the disorder. This is a good example of the phenomenon of variable expressivity: the differing severities of disease in different individuals with the same genotype.[12] In the case of NF-2, however, manifestations are similar among family members; a strong genotype-phenotype correlation is believed to exist.[12] Both NF-1 and NF-2 can also appear to be spontaneous de novo mutations, with no family history. These cases account for about one half of neurofibromatosis cases.[12]

Similar to polydactyly, NF is also an autosomally dominant mutation, that is not prevalent in the society. Neurofibromatosis-1 is found in approximately 1 in 2,500-3,000[3] live births (carrier incidence 0.0004, gene frequency 0.0002) and is more common than NF-2.

The gene affected in NF-1, is located on the long arm of the chromosome 17 (q11.2). It encodes for a protein called neurofibromin, otherwise known as a "tumor suppressor" protein. This protein is a negative regulator of the Ras kinase pathway (p21 oncoprotein).[13] Neurofibromatosis alters or weakens this protein (due to deletion, missense mutation, or nonsense mutations,[1]) allowing rapid, radical growth of cells all over the body, especially around the nervous system. The essential problem is the inability to inactivate GTP due to a defective GTP-ase (neurofibromin). This leads to the common symptoms for neurofibromatosis - clumpings of the tumors, called neurofibromas and schwannomas. Less is known about the NF-2 linked gene and its product, merlin. However, it is on the long arm of the chromosome 22q(11.1-13.1[1]) and codes for the protein.

Because there is no cure for the condition itself, the only therapy for patients with neurofibromatosis is a program of treatment by a team of specialists to manage symptoms or complications. Surgery may be needed when the tumors compress organs or other structures. Less than 10% of people with neurofibromatosis develop cancerous growths; in these cases, chemotherapy may be successful.[14]

Although there is no cure for NF, the Neurofibromatosis Association is optimistic there will be an effective treatment within the next five to ten years. For families with NF, genetic screening and counselling is available.[15]

Neurofibromatosis (or von Recklinghausen disease[2]) was first described in 1882 by the German pathologist, Friedrich Daniel von Recklinghausen. As a young scientist, Recklinghausen was the student of the then renowned Rudolf Virchow in Berlin. Recklinghausen was successful in generating some of the most descriptive medical observations of his time, making him the first person to describe and coin the term "hemachromatosis" (Hämochromatose, Tageblatt der Naturforschenden Versammlung). Recklinghausen is now known for his contributions to staining methods, and most importantly for his important paper on neurofibromatosis published in 1881, to honor Rudolf Virchow’s 25 year jubilee, in which he describes neurofibromatosis. Recognized as a distinguished histopathologist, and a great scientist to this date, he lends his name to the syndrome, which he himself elucidated.[16]

In May 2011, a case was reported in the United Kingdom in which a 15-month-old child who turned out to have Neurofibromatosis type I was misdiagnosed as being abused under the assumption that the mother had Münchausen syndrome, because the child gained weight while in hospital and lost weight while at home.[17] The child was placed in foster care for 6 months and then returned to his parents after he was correctly diagnosed.

In March 2007, the treatment of 30-year-old neurofibromatosis patient Pascal Coler of France ended after he had received what his doctors call the world's first successful full face transplant.[20][21]

In November 2006, there was an hour-long documentary on the British television network Channel 4 about Facing the World, an organization that helps children with severe facial disfigurements in developing countries. One of the children featured on the documentary was Arianto, an Indonesian boy who suffered from a severe form of neurofibroma resulting in hemifacial giganticism.

Also in that year, another documentary on BBC2 (edge of life) featured a neurofibromatosis case. On that documentary was a young teenager, Amit Ghose, who had decided for himself to have corrective surgery at the age of 14. In this case, the neurofibroma occurred on the face, resulting in the loss of sight in one eye and having to have it removed. This was a case of NF-2, resulting in the disfigurement of the one side of the face, while leaving the other side completely normal.

Joseph Merrick, the Elephant Man, was once considered to have been affected with neurofibromatosis type I. However, it is possible Merrick suffered from the very rare Proteus syndrome. This, however, has given rise to the common misconception that neurofibromatosis and "Elephant Man disease" are one and the same.

Several national organizations provide support for those challenged by neurofibromatosis. Some include:

The following drug companies are supporters of the Children's Tumor Foundation and are actively developing NF-related drugs: