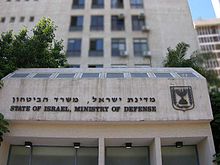 The Ministry Of Defence

The Ministry of Defence (Hebrew: מִשְׂרַד הַבִּטָּחוֹן‎‎, Misrad HaBitahon) of the government of Israel, is the governmental department responsible for defending the State of Israel from internal and external military threats. Its political head is the Defence Minister, and its offices are located in HaKirya, Tel Aviv.

The Ministry of Defence oversees most of the Israeli security forces, including the Israel Defence Forces (IDF), IMI, the Israel Military Industries, IAI, Israel Aircraft Industries.[1]

The MOD was established when the British Mandate of Palestine ended, and the British Army departed Palestine and the State of Israel was formed. This ended the rag-tag militia units during British rule and gave way to the formal defense of the Jewish state.

The Defence Minister of Israel (Hebrew: שַׂר הַבִּטָּחוֹן‎‎, Sar HaBitahon, lit. Minister of Security)[2] heads the ministry. The post is considered to be the second most important position in the Israeli cabinet, and usually has a Deputy Minister. The Defense Minister is also a permanent member of the Security Cabinet. The current Defense Minister is Ehud Barak, leader of Independence.

Due to the great importance of the defense portfolio, prime ministers have often held the position in addition to their prime ministerial duties; seven of the sixteen Defense Ministers to date were also serving Prime Ministers. Four of them (Moshe Dayan, Yitzhak Rabin, Ehud Barak and Shaul Mofaz) are also former Chief of Staffs of the Israel Defense Forces.

Amongst the duties of the post, Defense Ministers can request administrative detention. Because of the intensive work and the tension between the political echelon to the military echelon, frequently disagreements and difference of opinion are created between the Defense Minister and the Chief of Staff.

2 Not a Knesset member at the time.

3 Barak was not a Knesset member at the time of appointment, but was elected in 2009.