The Mark 82 (Mk 82) is an unguided, low-drag general-purpose bomb, part of the U.S. Mark 80 series. The explosive filling is tritonal. 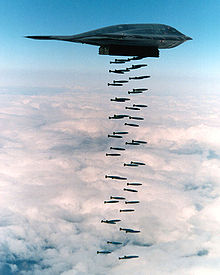 A B-2 Spirit dropping Mk 82 bombs into the Pacific Ocean in a 1994 training exercise off Point Mugu, California.

With a nominal weight of 500 lb (227 kg), it is the smallest of those bombs in current service, and one of the most common air-dropped weapons in the world. Although the Mk 82's nominal weight is 500 lb (227 kg), its actual weight varies considerably depending on its configuration, from 510 lb (232 kg) to 570 lb (259 kg). It is a streamlined steel casing containing 192 lb (89 kg) of Tritonal high explosive. The Mk 82 is offered with a variety of fin kits, fuzes, and retarders for different purposes.

Currently only the General Dynamics plant in Garland, Texas is DoD certified to manufacture bombs for the US Armed Forces.

The Mk 82 is currently undergoing a minor redesign to allow it to meet the insensitive munitions requirements set by Congress.

According to a test report conducted by the United States Navy's Weapon System Explosives Safety Review Board (WSESRB) established in the wake of the tragic 1967 USS Forrestal fire, the cooking off time for a Mk 82 is approximately 2 minutes 30 seconds.

In low-level bombing, it is easy for the delivering aircraft to sustain damage from the blast and fragmentation effects of its own munitions because the aircraft and ordnance arrive at the target at the same time. To combat this, the standard Mk-82 General Purpose bomb can be fitted with a special high-drag tail fin unit. In this configuration, it is referred to as the Mk-82 Snakeye.[3]

The tail unit has 4 folded fins which spring open into a cruciform shape when the bomb is released. The fins increase the drag of the bomb, slowing its forward progress and allowing the delivery aircraft to safely pass over the target before the bomb explodes.