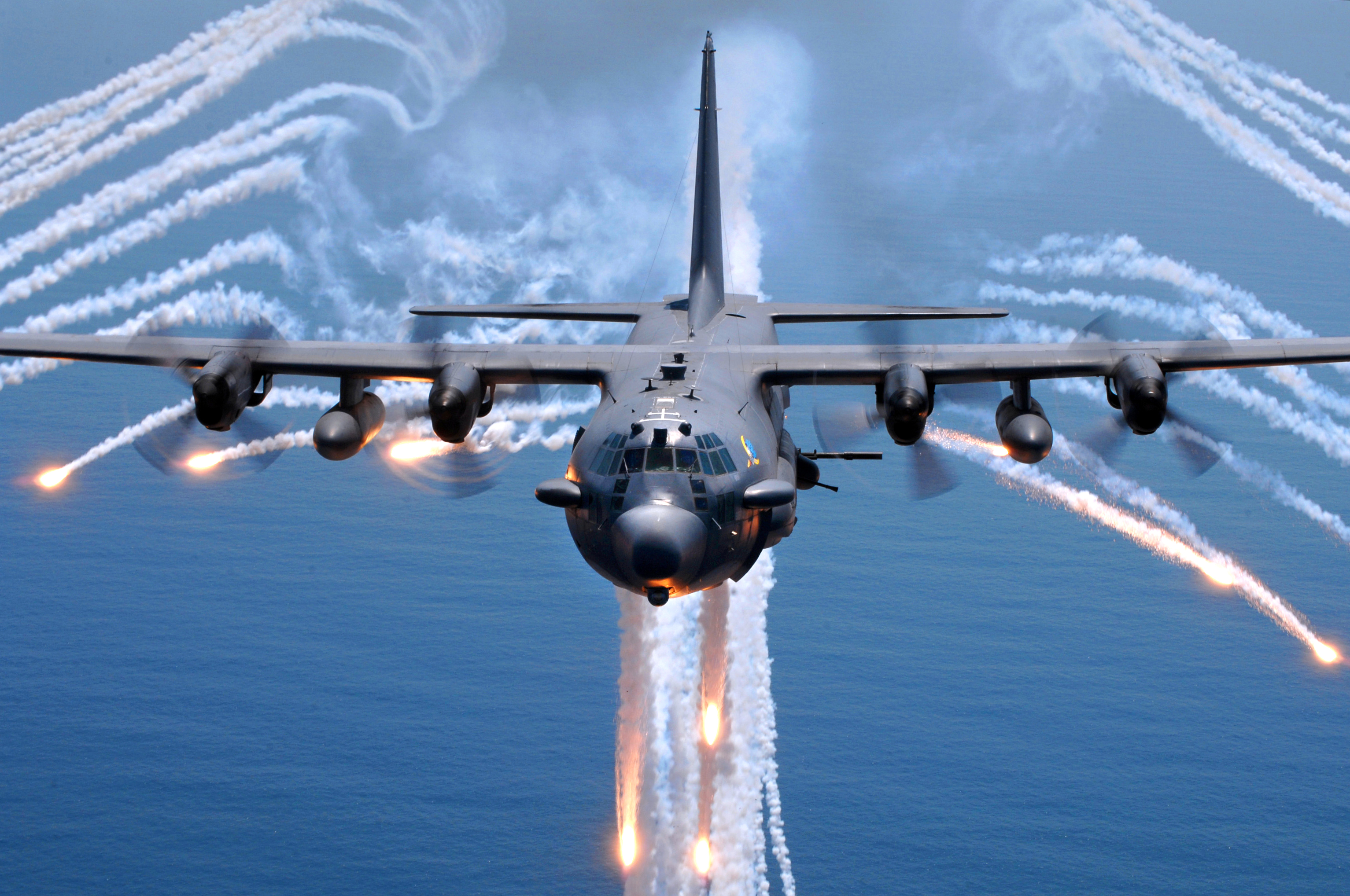 The Lockheed AC-130 is a heavily-armed ground attack airplane. The basic airframe is manufactured by Lockheed, and is responsible for the conversion into a gunship and for aircraft support.

The gunship's sole user is the , which uses AC-130H Spectre and AC-130U Spooky variants. The AC-130 is powered by four s and has an armament ranging from 20 mm s to 105 mm s. It has a standard crew of twelve or thirteen Airmen, including five officers (two pilots, a navigator, an electronic warfare officer and a fire control officer) and enlisted personnel (flight engineer, electronics operators and aerial gunners).

The US Air Force uses the AC-130 gunships for , , and force protection. Close air support roles include supporting ground troops, escorting s, and flying urban operations. Air interdiction missions are conducted against planned targets and targets of opportunity. Force protection missions include defending s and other facilities. Stationed at in Northwest , the gunship squadrons are part of the (AFSOC), a component of (SOCOM).

The C-130 Hercules was selected to replace the AC-47 Gunship I (known as "Spooky" or "Puff the Magic Dragon") during the Vietnam War, to improve gunship endurance capabilities and increase capacity to carry munitions.

In 1967, JC-130A USAF 54-1626 was selected for conversion into the prototype AC-130A gunship. The modifications were done that year at Wright-Patterson Air Force Base, by the Aeronautical Systems Division. A direct view night vision telescope was installed in the forward door, an early forward looking infrared (FLIR) in the forward part of the left wheel well, and Gatling guns fixed mounted facing down and aft along the left side. The analog fire control computer prototype was handcrafted by RAF Wing Commander Tom Pinkerton at the USAF Avionics Laboratory. Flight testing of the prototype was subsequently performed primarily at , followed by further testing and modifications. By September 1967, the aircraft was certified ready for combat testing and was flown to Nha Trang Air Base, South Vietnam for a 90 day test program. [ [http://www.nationalmuseum.af.mil/factsheets/factsheet.asp?id=3216 USAF National Museum AC-130A fact sheet] ] Following these successes, a few more AC-130As were constructed using similar equipment and manufactured versions of the analog computer. The original 54-1626 Gunship is displayed at the USAF Museum.

The AC-130 was supplemented by the AC-119 Shadow Gunship III during the Vietnam War, which would later prove underpowered with a wartime payload. In 1970, an additional dozen AC-130As were acquired under the "" project. Regardless of their project names, the aircraft were more commonly referred to by the Squadron's call sign: "Spectre".

These heavily-armed aircraft incorporate side-firing weapons integrated with sophisticated sensors, navigation and fire control systems to provide precision firepower or area-saturation fire with its varied armament. The AC-130 can spend long periods flying over their target area at night and in adverse weather. The sensor suite consists of a television sensor, sensor, and . These sensors allow the gunship to visually or electronically identify friendly ground forces and targets in most weather conditions.

The AC-130U is equipped with the , a for long-range target detection and identification. The gunship's navigational devices include the systems and . The AC-130U employs technologies developed in the 1990s and can attack two targets simultaneously. It also has twice the capacity of the AC-130H.

During the Vietnam era the various AC-130 versions following the Pave Pronto modifications were equipped with a (MAD) system called the Black Crow (AN/ASD-5), a highly sensitive passive device with a phased-array antenna located in the left-front nose radome that could pick up localized deviations in earth's magnetic field and is normally used to detect submerged submarines. The Black Crow system on the AC-130A/E/H could accurately detect the unshielded ignition coils of Russian trucks driven by the North Vietnamese that were hidden under the dense foliage of the jungle canopy along the Ho Chi Minh trail. It could also detect the signal from a hand-held transmitter that was used by air controllers on the ground to identify and locate specific target types. The system was slaved into the targeting computer.

during twilight operations in 1988]

The AC-130 Gunship first arrived in South Vietnam on 21 September 1967 under the Gunship II program, and began combat operations over Laos and South Vietnam that year. By 30 October 1968, enough AC-130 Gunship IIs arrived to form a squadron. The (SOS), of the (TFW) were activated on the above date at Ubon AB, Thailand.

By December 1968 most AC-130s were flown under F-4 escort from the 479th TFS (Tactical Fighter Squadron), normally three Phantoms per Gunship. In late 1969, under the code name of "Surprise Package", 56-0490 arrived with solid state laser illuminated low light level TV with a companion YAG laser designator, an improved forward looking infrared (FLIR) sensor, video recording for TV and FLIR, inertial navigation, and a prototype digital fire control computer. Surprise Package was equipped with the latest 20 mm Gatling guns and 40 mm Bofors cannon, but no 7.62 mm close support armament. Surprise Package was refitted with upgraded similar equipment in the summer of 1970, and then redeployed to Ubon RTAFB. Surprise Package served as a test bed for the avionic systems and armament for the AC-130E. In the summer of 1971, Surprise Package was converted to the Pave Pronto configuration, and assumed its new nickname, Thor.

In Vietnam, gunships destroyed more than 10,000 trucks and participated in many crucial close air support missions. During the (Operation Urgent Fury) in 1983, AC-130s suppressed enemy air defense systems and attacked ground forces enabling the successful assault of the Point Salines Airfield via and air land of friendly forces. The AC-130 aircrew earned the "Lieutenant General William H. Tunner Award" for the mission.

AC-130s also had a primary role during the (Operation Just Cause) in 1989 when they destroyed Panama Defense Force headquarters and numerous command and control facilities. Aircrews earned the for the most meritorious flight of the year and the Tunner Award for their efforts.

During Operation , AC-130s provided close air support and force protection (air base defense) for ground forces, and battlefield interdiction. The primary interdiction targets were early warning/ground control intercept (EW/GCI) sites along the southern border of Iraq. The first gunship to enter the helped stop a southbound Iraqi armored column on 29 January 1991. One day later, three more gunships provided further aid to Marines participating in the operation. The gunships attacked Iraqi positions and columns moving south to reinforce their positions north of the city. Despite the threat of SAMs and increasing visibility during the early morning hours of 31 January 1991, one gunship opted to stay to continue to protect the Marines. A surface-to-air missile (SAM) subsequently shot down this AC-130H, AF Serial No. 69-6567, call sign Spirit 03. All 14 crew members of Spirit 03 perished. [ [http://www.specialoperations.com/Memorial/spirit.html Spirit 03 and the Battle for Khafji] ]

The military has used AC-130 gunships during Operations Restore Hope and United Shield in , in the mission in , and in the 1997 evacuation of American noncombatants in .

The AC-130 gunship has the distinction of holding the record for the longest sustained flight by a C-130. From 22nd through the 24th of October 1997, two AC-130U gunships flew 36.0 hours nonstop from , Florida to (Daegu), South Korea while being refueled 7 times in the air by aircraft. This record flight shattered the previous record longest flight by over 10 hours while the 2 gunships took on 410,000 lbs of fuel and displayed the Gunship's ability to match their wings motto of 'Any Time, Any Place!'. Gunships also were part of the buildup of U.S. forces in 1998 to convince to comply with U.N. weapons inspections. The United States later used gunships during the 2001 invasion of Afghanistan, and the . In 2007 US Special Operations forces used the AC-130 in attacks on suspected militants in . [ [http://www.cnn.com/2007/WORLD/africa/01/08/somalia.strike/index.html "Pentagon official: U.S. attacks al Qaeda suspects in Somalia"] ] [ [http://news.bbc.co.uk/2/hi/africa/6296971.stm "US plane 'bombed Somalia targets'"] ] The AC-130 has the distinction of never having a base under its protection lost to the enemy.Fact|date=July 2008

One of the first seven AC-130A aircraft deployed was AF Serial No. 53-3129, named "First Lady" in November 1970. In addition to being the first AC-130, this aircraft was a conversion of the first production C-130. On 25 March 1971, it took an anti-aircraft artillery hit in the nose over the Ho Chi Minh Trail in Laos. The 37 mm shell destroyed everything below the crew deck. In 1975, after the conclusion of US involvement in the hostilities in Indochina, it was transferred to the Air Force Reserve, where it served with the 711th Special Operations Squadron of the . In 1980 the aircraft was upgraded from the original three-bladed propellers to the quieter four-bladed propellers and was eventually retired in late 1995. The retirement also marked an end to the flying the AC-130A. The aircraft now sits on display in the final Air Force Reserve configuration with grey paint, black markings, the four-bladed Hamilton Standard props at the at , USA. [ [http://www.gunships.org/birds.html List of AC-130 Gunships] ] [ [http://www.gunships.org/1stlady.html "First Lady" retires, era ends] ]

In 2007, AFSOC initiated a program to upgrade the armament of existing AC-130s still in service. The test program planned for the 25 mm GAU-12/U and 40 mm Bofors cannon on the AC-130U gunships to be replaced with two Mk 44 30 mm cannons. [cite web|url=http://www.strategypage.com/dls/articles/200610105842.asp|title=30 mm Everywhere - Strategy Page] In 2007, the Air Force modified four AC-130U gunships as test platforms for the Bushmasters. However, AFSOC canceled its plans to install the new cannons on its fleet of AC-130Us. It has since removed the guns and re-installed the original 40 mm cannons and returned the planes to combat duties. [cite web|url=http://www.nwfdailynews.com/share/profiles/?slid=52836bbc-64ad-c2d4-9dae-291a895b67d1&plckController=PersonaBlog&plckScript=personaScript&plckElementId=personaDest&plckPersonaPage=BlogViewPost&plckPostId=Blog%3a52836bbc-64ad-c2d4-9dae-291a895b67d1Post%3a4d252120-6dcd-4132-b823-23038489868d&sid=sitelife.nwfdailynews.com|title=AIR FORCE CANCELS 30 MM CANNON PROGRAM FOR AC-130U GUNSHIPS - Inside the Air Force, 11 July 2008]

There are also plans to possibly replace the with a breech-loading 120 mm mortar, and to give the AC-130 a standoff capability using either the missile, the (based on the rocket), or the Viper Strike glide bomb. [cite web|url=http://www.dtic.mil/ndia/2006garm/tuesday/elliot.pdf|title=Future AC-130 Gunship Integrated Weapons Systems (PDF)|format=PDF]

* [http://www.af.mil/factsheets/factsheet.asp?fsID=71 AC-130H/U Gunship fact sheet on US Air Force site] on which this article was originally based.
* [http://www.spectre-association.org/history/historySpectre.htm "Gunship History" from the Spectre Association site]
* [http://www.gunships.org/birds.html List of AC-130 Gunships on Gunships.org]
* [http://www.globalsecurity.org/military/systems/aircraft/ac-130.htm AC-130 on GlobalSecurity.org]
* [http://www.npr.org/templates/story/story.php?storyId=7608428 "Powerful Gunships Prowl Iraq, and Limits Show"] on NPR.org from ""