A general-purpose bomb is an air-dropped bomb intended as a compromise between blast damage, penetration, and fragmentation in explosive effect.

General-purpose (GP) bombs use a thick-walled metal casing with explosive filler (typically TNT, Composition B, or Tritonal in NATO or United States service) composing about 50% of the bomb's total weight. (The British term for a bomb of this type is "medium case" or "medium capacity",(abbreviated to MC). The GP bomb is a common weapon of fighter bomber and attack aircraft because it is useful for a variety of tactical applications and relatively cheap.

General-purpose bombs are often identified by their weight (e.g., 500 lb, 250 kg). In many cases this is strictly a nominal weight, or caliber, and the actual weight of each individual weapon may vary depending on its retardation, fusing, carriage, and guidance systems. For example, the actual weight of a U.S. M117 bomb, nominally 750 lb (340 kg), is typically around 820 lb (374 kg).

Most modern air-dropped GP bombs are designed to minimize drag for the carrier aircraft.

In low-altitude attacks, there is a danger of the attacking aircraft being caught in the blast of its own weapons. To address this problem, GP bombs are often fitted with retarders, parachutes or pop-out fins that slow the bomb's descent to allow the aircraft time to escape the detonation.

GP bombs can be fitted with a variety of fuses and fins for different uses. One notable example is the "daisy cutter" fuse used on Vietnam-era American weapons, an extended probe designed to ensure that the bomb would detonate on contact (even with foliage) rather than burying itself in earth or mud, which would reduce its effectiveness.

GP bombs are commonly used as the warheads for more sophisticated precision-guided munitions. Affixing various types of seeker and electrically controlled fins turns a basic 'iron' bomb into a laser-guided bomb (like the U.S. Paveway series), an electro-optical guided bomb, or, more recently, GPS-guided weapon (like the U.S. JDAM). The combination is cheaper than a true guided missile (and can be more easily upgraded or replaced in service), but substantially more accurate than an unguided bomb.

During the Korean War and Vietnam War the U.S. used older designs like the M117 and M118, which had a higher explosive content (about 65%) than most current weapons. Although some of these weapons remain in the U.S. arsenal, they are little used, and the M117 is primarily carried only by the B-52 Stratofortress.

The primary U.S. GP bombs are the Mark 80 series. This class of weapons uses a shape known as Aero 1A, designed by Ed Heinemann of Douglas Aircraft as the result of studies in 1946. It has a length-to-diameter ratio of about 8:1, and results in minimum drag for the carrier aircraft. The Mark 80 series was not used in combat until the Vietnam War, but has since that time replaced most earlier GP weapons. It includes four basic weapon types:

Vietnam service showed the Mk 81 "Firecracker" to be insufficiently effective, and it was withdrawn from U.S. service. However, recently precision-guided variants of the Mk 81 bomb have begun a return to service, based on U.S. experience in Iraq after 2003, and the desire to reduce collateral damage compared to Mk 82 and larger bombs (e.g., when attacking a single small building in a populated area).

Since the Vietnam War, United States Navy and United States Marine Corps GP bombs are distinguished by a thick ablative fire-retardant coating, which is designed to delay any potential accidental explosion in the event of a shipboard fire. Land-based air forces typically do not use such coatings, largely because they add some 30 lb (14 kg) to the weight of the complete weapon.[citation needed]

In the Mk 80 series bomb bodies is also used in the following weapons:

Dumb Mk 80 bombs could be smart bombs with attached kits: 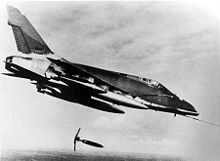 The 1000 lb MC was developed from 1942 to replace the existing 1000 lb GP (General Purpose) bomb. Initially using most of the components of the 1000 lb GP it was decide to give it a new tail and was built with a half-inch thick wall. Fillings could be Amatex, Amatol, Minol, RDX and others. Actual weight was around 1020 lb (464 kg).[1] It was introduced to service in 1943 and about a quarter of a million produced by the end of the war.

The Russian term for general-purpose bomb is fugasnaya aviatsionnaya bomba, abbreviated FAB and followed by the bomb's nominal weight in kilograms. Most Russian iron bombs have circular ring airfoils rather than the fins used by Western types.

In 1962 a new series of streamlined, low-drag bombs was introduced, designed for external carriage by fighter-bomber aircraft rather than in internal bays. They come in only two sizes, 250 kg (550 lb) and 500 kg (1,100 lb). Both bombs have a single nose fuze.

Both the 54 and 62 series designs remain in use. The most common of these are the FAB-100, FAB-250, FAB-500, FAB-750, and FAB-1000, roughly corresponding to the U.S. Mark 80 series. These have seen widespread service in Russia, Warsaw Pact nations, and various export countries.

Other countries, including Brazil, Chile, Israel, India, Portugal, Romania, South Africa, Spain, and Sweden, manufacture their own bombs, most of which are either licensed version of the U.S. Mark 80 series or close copies.