The McDonnell Douglas KC-10 Extender is the military adaptation of the three-engined DC-10 airliner for the United States Air Force (USAF).[N 1] The KC-10 incorporates military-specific equipment for its primary roles of transport and aerial refueling. It was developed to supplement the KC-135 Stratotanker following experiences in Southeast Asia and the Middle East. The KC-10 was the second McDonnell Douglas transport aircraft to be selected by the Air Force following the C-9. A total of 60 KC-10s were produced for the USAF. Two similar tankers were sold to the Royal Netherlands Air Force under the designation KDC-10.

The KC-10 plays a key role in the mobilization of US military assets, taking part in overseas operations far from home. These aircraft participated in the 1986 bombing of Libya and 1999 NATO bombing of Yugoslavia, and more recently, Operations Enduring Freedom, Iraqi Freedom and Noble Eagle. However, the KC-10 was most notable for its participation in the Gulf War, where it was central to the airlift and aerial refueling effort. The aircraft is expected to serve until 2043.

The KC-10 Extender was born out of the need to augment the Air Force's large fleet of more than 700 Boeing KC-135 Stratotankers. During the Vietnam War, doubts began to be raised regarding the KC-135s' ability to meet the needs of the US' global commitments. The aerial refueling fleet was deployed to Southeast Asia to support tactical aircraft and strategic bombers, while maintaining the US-based support of the nuclear-bomber fleet. Consequently, the Air Force sought an aerial tanker with greater capabilities than the KC-135. In 1972 two DC-10s were flown in trials at Edwards Air Force Base, simulating air refuelings to check for possible wake issues. Boeing performed similar tests with a 747.[2]

During the 1973 Yom Kippur War, the Air Force commenced Operation Nickel Grass to supply Israel with weapons and supplies. The operation demonstrated the necessity for adequate air-refueling capabilities; denied landing rights in Europe, C-5 Galaxies were forced to carry a fraction of their maximum payload on direct flights from the continental United States to Israel.[3][4] To address this shortfall in mobility, in 1975, under the Advance Tanker Cargo Aircraft program, four aircraft were evaluated: the C-5 itself, the Boeing 747, the McDonnell Douglas DC-10, and the Lockheed L-1011.[5] The only serious contenders were McDonnell Douglas and Boeing, especially the latter, who thought they had the ideal offer. However, on 19 December 1977, the McDonnell Douglas KC-10 Extender was chosen. The primary reason of this choice was the KC-10's ability to operate from shorter runways.[4] Initially, a batch of 12 aircraft was ordered, but this figure was revised upwards to 60.[4] 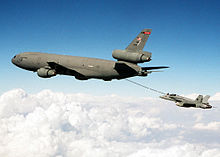 The KC-10's mixed refueling system of hose-and-drogue and flying-boom allow it to refuel the aircraft of the Air Force, Navy, Marine Corps and allied forces.[6]

The KC-10 first flew on 12 July 1980, but it was not until October the same year that the first aerial refuel sortie was performed.[6][7] The design for the KC-10 involved modifications from the DC-10-30CF design. Unnecessary airline features were replaced by an improved cargo-handling system and military avionics.[8] Meanwhile, the KC-10 retains 88% commonality with its commercial counterparts, giving it greater access to the worldwide commercial support system.[4] Other changes from the DC-10-30CF include the removal of most cargo doors and windows.[9] Early aircraft featured a distinctive light gray, white and blue paint scheme, but a gray-green camouflage scheme was used on later tankers. Aircraft have since been switched to a medium gray color.[10]

However, the major changes were the addition of the McDonnell Douglas Advanced Aerial Refueling Boom (AARB) and extra fuel tanks below the main deck. The extra tanks increase the KC-10's fuel capacity to 356,000 lb (161,478 kg), nearly doubling the KC-135's capacity.[6] The KC-10 has both a centerline refueling boom and a drogue-and-hose system on the starboard side of the rear fuselage. The KC-10 boom operator is located in the rear of the aircraft with wide window for monitoring refueling. The operator controls refueling operations through a digital fly-by wire system.[10][11][1] Unlike the KC-135, the KC-10's hose-and-drogue system allows refueling of Navy, Marine Corps, and most allied aircraft, all in one mission.[6] The final twenty KC-10s produced included wing-mounted pods for added refueling locations.[2] In addition to its tanking role, the KC-10 can carry a complement 75 personnel with 146,000 lb (66,225 kg) of cargo, or 170,000 lb (77,110 kg) in an all-cargo configuration.[6]

A need for new transport aircraft for the Royal Netherlands Air Force was first identified in 1984. In 1991 four categories of transport requirements were established. Category A required a large cargo aircraft with a range of at least 4500 km and the capability to refuel F-16s. In 1992, two DC-10-30CFs were acquired from Martinair in a buy/leaseback contract. When one of the bought aircraft was lost in the Martinair Flight 495 crash, a third aircraft was bought from Martinair.[12]

The conversion was handled via the United States foreign military sales program, which in turn contracted McDonnell Douglas. Costs for the conversion were initially estimated at $89.5 million (FY 1994). The aircraft was to be equipped with both a boom and a probe and drogue system. However, because McDonnell Douglas did not have any experience with the requested Remote Aerial Refueling Operator (RARO) system, and because the third aircraft differed from the original two, the program could not be completed at budget. By omitting the probe and drogue system and a fixed partition wall between the cargo and passenger, the cost could be limited at $96 million. To make up for the cost increase McDonnell Douglas hired Dutch companies to do part of the work. The actual converting of the aircraft for instance was done by KLM. Conversion of the aircraft was done from October 1994 to September 1995 for the first aircraft and from February to December 1995 for the second. This was much longer than planned, mostly because McDonnell Douglas did not deliver the parts in time. This would have again increased the cost, but in the contract for the AH-64 Apaches which the Royal Netherlands Air Force also bought from McDonnell Douglas, the price was agreed to be kept at $96 million.[12]

In an attempt to modernize the platform, the USAF has awarded Boeing a US$216 million contract to upgrade its fleet of 59 aircraft with new communication, navigation, surveillance and air traffic management (CNS/ATM) system. Boeing claims that this will allow the aircraft to fly in civil airspace after 2015 as new ICAO and FAA standards take effect.[13]

The first KC-10s was delivered to the Air Force's Strategic Air Command (SAC) in March 1981 at Barksdale AFB; the 60th and final KC-10 arrived on 29 November 1988.[14] The KC-10s served with SAC until 1992, when they were re-assigned to the newly-established Air Mobility Command. In the aerial refueling role, the KC-10s have been operated largely in the strategic refueling of large number of tactical aircraft on ferry flights and the refueling of other strategic transport aircraft. Conversely, the KC-135 fleet has operated largely in the in-theater tactical role. There are 59 KC-10 Extenders in service with the USAF as of 2010.[1][13] The USAF's KC-10s are stationed primarily at Travis AFB, California, and McGuire AFB, New Jersey. 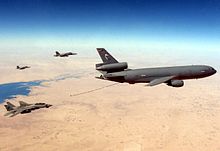 When faced with refusals of basing and overflight rights from continental European countries during Operation El Dorado Canyon, the U.S. was forced to use the UK-based F-111s in the 1986 air-strikes against Libya. The KC-10s and KC-135s allowed 29 F-111s, along with other Air Force and Navy aircraft, to reach their targets.[15] The KC-10 again played a key role during Operations Desert Shield and Desert Storm in 1991; KC-10s facilitated the deployment of tactical, strategic, and transport aircraft to Saudi Arabia. In the early stages of Operation Desert Shield, aerial refueling was key to the rapid airlift of materiel and forces. In addition to refueling airlift aircraft, the KC-10, along with the smaller KC-135, moved thousands of tons of cargo and thousands of troops in support of the massive buildup. The KC-10 and the KC-135 conducted about 51,700 separate refueling operations and delivered 125 million gallons (475 million liters) of fuel without missing a single scheduled rendezvous.[1]

Since then, the KC-10 had participated in other smaller conflicts. In March 1999, NATO launched Operation Allied Force against the government of Yugoslavia. The mobility portion of the operation began in February and was heavily dependent on tankers. By early May 1999, some 150 KC-10s and KC-135s deployed to Europe where they refueled bombers, fighters and support aircraft engaged in the conflict. The KC-10 flew 409 missions throughout the entire Allied Force campaign and continued support operations in Kosovo.[1] Since 11 September 2001, KC-10s had also flown more than 350 missions guarding U.S. skies as a part of Operation Noble Eagle. During Operations Enduring Freedom and Iraqi Freedom, KC-10s have flown more than 1,390 missions delivering critical air refueling support to numerous joint and Coalition receiver aircraft.[1] KC-10s are expected to serve until 2043.[16]

The two Dutch KDC-10s, T-264 "Prins Bernhard" and T-235 "Jan Schäfer", are used for both refueling and transport. They are stationed on Eindhoven Airport as part of the 334th Transport Squadron.[17] Of the 5,500 hours flown in the first 3 years of use, the aircraft were used in their tanker role for 50% of the time. Besides being used by the air force and NATO allies, the KDC-10s are also used to support peacekeeping and humanitarian aid operations. Of the first three years, 32% of the flight hours were used for peacekeeping and humanitarian aid.[12]

In this function, the aircraft have been deployed to Kosovo to evacuate refugees, to the Caribbean and Central America to provide humanitarian aid after the hurricanes Luis, Georges and Mitch and to various countries in Africa and Asia to provide development aid. In 1998, the aircraft were also used to evacuate Dutch citizens from Indonesia during the Fall of Suharto. Dutch KDC-10s have been operating out of Manas AFB in support of allied forces during Operation Enduring Freedom. 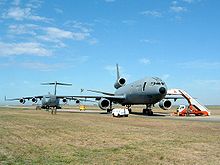 On 17 September 1987, KC-10A serial number 82-0190 was undergoing maintenance on the ground at Barksdale AFB, Louisiana and suffered an explosion and subsequent fire. The KC-10 was significantly damaged and written-off. One member of the ground crew, the crew chief, Sgt. Joseph M. Burgio died in the fire.[22]