The Pentium M brand refers to a family of mobile single-core x86 microprocessors (with the modified Intel P6 microarchitecture) introduced in March 2003 (during the heyday of the Pentium 4 desktop CPUs), and forming a part of the Intel Carmel notebook platform under the then new Centrino brand. The Pentium M processors had a maximum thermal design power (TDP) of 5–27 W depending on the model, and were intended for use in laptops (thus the "M" suffix standing for mobile). They evolved from the core of the last Pentium III–branded CPU by adding the front-side bus (FSB) interface of Pentium 4, an improved instruction decoding and issuing front end, improved branch prediction, SSE2 support, and a much larger cache. The first Pentium M–branded CPU, code-named Banias, was followed by Dothan. The Pentium M-branded processors were succeeded by the Core-branded dual-core mobile Yonah CPU with a modified microarchitecture.

The Pentium M coupled the execution core of the Pentium III with a Pentium 4 compatible bus interface, an improved instruction decoding/issuing front end, improved branch prediction, SSE2 support, and a much larger cache. The usually power-hungry secondary cache uses an access method which only switches on the portion being accessed. The main intention behind the large cache was to keep a decent-sized portion of it still available to the processor even when most of the L2 cache was switched off, but its size led to a welcome improvement in performance.

Other power saving methods include dynamically variable clock frequency and core voltage, allowing the Pentium M to throttle clock speed when the system is idle in order to conserve energy, using the SpeedStep 3 technology (which has more sleep stages than previous versions of SpeedStep). With this technology, a 1.6 GHz Pentium M can effectively throttle to clock speeds of 200 MHz, 400 MHz, 600 MHz, 800 MHz, 1000 MHz, 1200 MHz, 1400 MHz and 1600 MHz; these intermediate clock states allow the CPU to better throttle clock speed to suit conditions. The power requirements of the Pentium M varies from 5 watts when idle to 27 watts at full load. This is useful to notebook manufacturers as it allows them to include the Pentium M into smaller notebooks.

Although Intel has marketed the Pentium M exclusively as a mobile product, motherboard manufacturers such as AOpen, DFI and MSI have been shipping Pentium M compatible boards designed for enthusiast, HTPC, workstation and server applications. An adapter, the CT-479, has also been developed by ASUS to allow the use of Pentium M processors in selected ASUS motherboards designed for Socket 478 Pentium 4 processors. Shuttle Inc. offers packaged Pentium M desktops, marketed for low energy consumption and minimal cooling system noise. Pentium M processors are also of interest to embedded systems' manufacturers because the low power consumption of the Pentium M allows the design of fanless and miniaturized embedded PCs.

As the M line was originally designed in Israel, the first Pentium M was identified by the codename Banias, named after an ancient site in the Golan Heights. The Intel Haifa Israel team had previously been working on the memory controller for Timna, which was based on earlier P6 memory controller designs giving them detailed knowledge of P6 architecture which they used when Intel gave them a crash project to create a backup mobile CPU. Given the product code 80535, it initially had no model number suffix, but was later identified as the Pentium M 705. It was manufactured on a 130 nm process, was released at frequencies from 900 MHz to 1.7 GHz using a 400 MT/s FSB, and had 1 megabyte (MB) of Level 2 cache. The core average TDP (Thermal Design Power) is 24.5 watts.

The CPUID signature for a Banias is 0x69X. 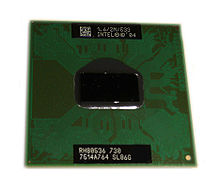 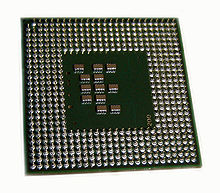 These 700 series Pentium M processors retain the same basic design as the original Pentium M, but are manufactured on a 90 nm process, with twice the secondary cache. Die size, at 84 mm2, remains in the same neighborhood as the original Pentium M, even though the 700 series contains approximately 140 million transistors, most of which make up the 2 MB cache. TDP is also down to 21 watts (from 24.5 watts in Banias), though power use at lower clockspeeds has increased slightly. However, tests conducted by third party hardware review sites show that Banias and Dothan equipped notebooks have roughly equivalent battery life.[citation needed] Additionally third party hardware review sites have benchmarked the Dothan at approx 10-20% better performance than the Banias in most situations.

The next generation of processors (with a microarchitecture being a derivative of P6 found in Pentium M CPUs), codenamed Yonah, was released under the Intel Core brand, as Core Duo and Core Solo.