Intel Atom is the brand name for a line of ultra-low-voltage x86 and x86-64 CPUs (or microprocessors) from Intel, designed in 45 nm CMOS and used mainly in netbooks, nettops, embedded application ranging from health care to advanced robotics and Mobile Internet devices (MIDs). On December 21, 2009, Intel announced the next generation of Atom processors, including the N450, with total kit power consumption down 20%.[2] Intel Atom processors are based on the Bonnell microarchitecture.[3][4]

Intel Atom is a direct successor of the Intel A100 and A110 low-power microprocessors (code-named Stealey), which were built on a 90 nm process, had 512 KB L2 cache and ran at 600 MHz/800 MHz with 3W TDP (Thermal Design Power). Prior to the Silverthorne announcement, outside sources had speculated that Atom would compete with AMD's Geode system-on-a-chip processors, used by the One Laptop per Child (OLPC) project, and other cost and power sensitive applications for x86 processors. However, Intel revealed on October 15, 2007 that it was developing another new mobile processor, codenamed Diamondville, for OLPC-type devices.[5]

"Atom" was the name under which Silverthorne would be sold, while the supporting chipset formerly code-named Menlow was called Centrino Atom.[6]

At Spring Intel Developer Forum (IDF) 2008 in Shanghai, Intel officially announced that Silverthorne and Diamondville are based on the same microarchitecture. Silverthorne would be called the Atom Z5xx series and Diamondville would be called the Atom N2xx series. The more expensive lower-power Silverthorne parts will be used in Intel Mobile Internet Devices (MIDs) whereas Diamondville will be used in low-cost desktop and notebooks. Several Mini-ITX motherboard samples have also been revealed.[7] Intel and Lenovo also jointly announced an Atom powered MID called the IdeaPad U8.[8] The IdeaPad U8 weighs 280 g and has a 4.8 in (12 cm) touchscreen providing better portability than a netbook PC and easier Internet viewing than a mobile phone or PDA.

In April 2008, a MID development kit was announced by Sophia Systems[9] and the first board called CoreExpress-ECO was revealed by a German company LiPPERT Embedded Computers, GmbH.[10] Intel offers Atom based motherboards.[11][12]

Intel Atom processors are based on the Bonnell microarchitecture[3][4] which can execute up to two instructions per cycle. Like many other x86 microprocessors, it translates x86-instructions (CISC instructions) into simpler internal operations (sometimes referred to as micro-ops, i.e., effectively RISC style instructions) prior to execution. The majority of instructions produce one micro-op when translated, with around 4% of instructions used in typical programs producing multiple micro-ops. The number of instructions that produce more than one micro-op is significantly fewer than the P6 and NetBurst microarchitectures. In the Bonnell microarchitecture, internal micro-ops can contain both a memory load and a memory store in connection with an ALU operation, thus being more similar to the x86 level and more powerful than the micro-ops used in previous designs.[19] This enables relatively good performance with only two integer ALUs, and without any instruction reordering, speculative execution, or register renaming. The Bonnell microarchitecture therefore represents a partial revival of the principles used in earlier Intel designs such as P5 and the i486, with the sole purpose of enhancing the performance per watt ratio. However, Hyper-Threading is implemented in an easy (i.e., low power) way to employ both pipelines efficiently by avoiding the typical single thread dependencies.[19]

On March 2, 2008, Intel announced a new single-core Atom Z5xx series processor (code-named Silverthorne) to be used in ultra-mobile PCs/mobile Internet devices (MIDs) which will supersede Stealey (A100 and A110). The processor is a 47 million transistor, 25 mm2, sub-3 W IA processor which allows ~2500 chips to fit on a single 300 mm diameter wafer, allowing for extremely economical production.

An Atom Z500 processor's dual-thread performance is equivalent to its predecessor Stealey, but should outperform it on applications that can use simultaneous multithreading and SSE3.[20] They run from 0.8 to 2.0 GHz and have between 0.65 and 2.4 W TDP rating respectively that can dip down to 0.01 W[21] when idle. It features a 2-issue simultaneous multithreading, 16 stage in-order pipeline with 32 KB instruction L1 and 24 KB data L1 caches, integer and floating point execution units, x86 front end, a 512 KB L2 cache and data transferred at 533 MHz on the front-side bus. The design is manufactured in 9M 45 nm high-k metal-gate CMOS and housed in a 441-ball µFCBGA package.[22][23] 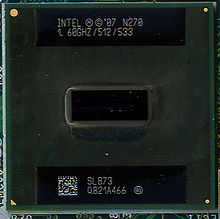 On March 2, 2008, Intel announced lower-power variants of the Diamondville CPU named Atom N2xx. It was intended for use in nettops, and the Classmate PC netbook.[24][25][26] Like their predecessors, these are single-core CPUs with Hyper-Threading.

On September 22, 2008, Intel announced a new dual-core processor (unofficially code-named Dual Diamondville) branded Atom 330, to be used in desktop computers. It runs at 1.6 GHz and has a FSB running at 533 MHz. The processor has an 8 W TDP rating. Its dual core consists of two Diamondville dies on a single substrate. Atom 330 supports 64 bit instructions.

During 2009, Nvidia used the Atom 300 and their GeForce 9400M chipset on a mini-ITX form factor motherboard for their Ion platform. 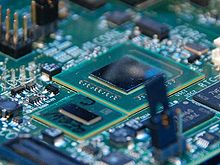 The relatively low power Atom CPU was originally used with a cheaper, not so electricity-efficient chipset such as the Intel 945G

Although the Atom processor itself is relatively low power for an x86 microprocessor, many chipsets commonly used with it dissipate significantly more power. For example, while the N270 CPU commonly used in netbooks through mid 2010 has a net maximum TDP of 2.5 W, an Intel Atom platform that uses the 945GSE Express chipset has a specified maximum TDP of 11.8 W, with the processor using a relatively small portion of the total power consumed. Individual figures are 2.5 W for the N270 processor, 6 W for the 945GSE chipset and 3.3 W for the 82801GBM I/O controller.[29][30][31][32] Intel also provides a US15W System Controller Hub based chipset with a combined TDP of less than 5 W together with the Atom processor Z5xx (Silverthorne) series, to be used in ultra-mobile PCs/Mobile Internet Devices (MIDs),[33] though some manufacturers have released premium ultra thin system running on these line of CPU (e.g. Sony VAIO X).

Initially, all Atom motherboards on the consumer market featured the Intel 945GC chipset, which uses 22 watts alone. As of early 2009, only a few manufacturers are offering lower power 945GSE-based motherboards to end users, paired with the Atom N270 or N280 CPU, while Sony VAIO pioneers the use of the low power US15W chipset with Z5xx series processors.

The current generation of the Atom is codenamed "Pineview" which is used in the "Pine Trail" platform. Intel's current netbook platform (codenamed Pine Trail-M) utilizes an Atom processor (codenamed Pineview-M) and Platform Controller Hub (codenamed Tiger Point). The graphics and memory controller have moved into the processor, which is paired with the Tiger Point PCH. This creates a more power efficient 2-chip platform rather than the 3-chip one used with previous-generation Atom chipsets.[41]

The new Atom N4xx chips became available on 11 January 2010.[44] It is used in netbook/nettop systems, and features an integrated single-channel DDR2 memory controller and an integrated graphics core. It features hyper-threading and is still manufactured on a 45 nm[45] process. The new design uses half the power of the older "Menlow" platform. This reduced overall power consumption and size makes the platform more desirable for use in smartphones and other mobile internet devices.

On December 23, 2009, MSI introduced a new series of netbooks to be released in January 2010[dated info], the Wind U130 and U135, that were among the first netbooks to incorporate the new "Pine Trail" platform. ASUS and Dell have since introduced netbooks based on the Pineview-M chip N4xx.

The D4xx and D5xx series support the x86-64 bit instruction set and DDR2-800. It is rated for embedded use. The series has an integrated graphics processor built directly into the CPU to help improve performance. The models are targeted at nettops and low end desktops. They do not support speedstep.

The Lincroft CPU (Z6xx) with the Whitney Point chipset is included in the Oak Trail platform. Oak Trail is a system-on-a-chip (SoC) just like Moorestown, which is aimed at smartphones and tablets. Unlike Moorestown, however, Oak Trail includes a PCI bus and will be able to run Windows. Oak Trail was presented on April 11, 2011 and will be released in May 2011.[dated info][48] The Z670 processor, part of the "Oak Trail" platform, delivers improved video playback, faster Internet browsing and longer battery life, "without sacrificing performance" according to Intel. "Oak Trail" includes support for 1080p video decode, as well as HDMI. The platform also has improvements in power-efficient performance and allows applications to run on various operating systems, including Google Android, MeeGo and Windows.

Cedar Trail-M release was delayed from September to November 2011 because the platform has encountered some graphics driver issues and has not yet passed certification for Windows 7.

The Cedar Trail-M platform will include two new CPUs, 32nm-based Atom N2800 (1.86GHz) and N2600 (1.6GHz), priced at US$47 and US$42, and will replace the existing Atom N475 and N455. The CPUs will also feature an integrated GPU that supports DirectX 10.1 technology. The platform will also adopt the existing NM10 chipsets for southbridge capability

Intel will release their next-generation "Cedar Trail" platform based on 32 nm process technology in the fourth quarter of 2011.[48] Intel states that it "will feature improvements in graphics capabilities including Blu-ray 2.0 support, a dedicated media engine for full 1080p playback and additional digital display options including HDMI output and DisplayPort. New features will include Intel® Wireless Music, Intel® Wireless Display, PC Synch and Fast Boot. In addition, the enhancements made in power consumption and TDP will enable fanless designs with longer battery life."

According to Intel spokeswoman Suzy Ramirez, speaking to CNET in June 2011[50], Intel has the following release plans:

In March 2009, Intel announced that it would be collaborating with TSMC for the production of the Atom processors.[51] The deal was put on hold due to lack of demand in 2010.

On September 13, 2011 Intel and Google have a joint announcement that a partnership to enable the world's largest chip maker's architecture on the search giant's products.[52]

The direct competitor of the Intel Atom is the AMD Fusion C- and E-series. The C-series (C-30: single core, C-50: dual cores) has a TDP (9W) similar to the Atom, the higher clocked E-series (E-240: single core, E-350: dual core) has a TDP of 18 Watts that corresponds more to an Atom including a dedicated GPU (e.g. ION2, ATI 5430). The processors include a single or dual core 64-bit CPU with out-of-order execution, DDR3 memory controller and an 80-core Radeon GPU. The performance of the E-series is significantly better than an Intel Atom - up to 326.5% better game performance.[53]

Embedded processors based on the ARM version 7 instruction set architecture (such as Nvidia's Tegra 2 series, TI's OMAP 3 series and Freescale's i.MX51 based on the Cortex-A8 core, or the Qualcomm Snapdragon and Marvell Armada 500/600 based on custom ARMv7 implementations) offer similar performance to the low end Atom chipsets[dubious – discuss] but at roughly one quarter the power consumption, and (like most ARM systems) as a single integrated system on a chip, rather than a two chip solution like the current Atom line. Although the next-generation Atom codenamed "Pineview" should greatly increase its competitiveness in performance/watt, ARM plans to counter the threat with the multi-core capable Cortex-A9 core as used in Nvidia's Tegra 2/3, TI's OMAP 4 series, and Qualcomm's next-generation Snapdragon series, among others.

The Nano and Nano Dual-Core series from VIA is slightly above the average thermal envelope of the Atom, but offers hardware AES support, random number generators, and out-of-order execution. Performance comparisons of the Intel Atom against the Via Nano indicate that a single core Intel Atom is outperformed by the Via Nano which is in turn outperformed by a dual core Intel Atom 330 in tests where the second core is used. The Core 2 Duo SU7300 outperforms the dual-core Nano.[54][55][56][57][58][59][60][61]

The Xcore86 (also known as the PMX 1000) is x586 based System on Chip (SoC) that offers a below average thermal envelope compared to the Atom.

Kenton Williston of EE Times said that while Atom will not displace ARM from its current markets, the ability to apply the PC architecture into smaller, cheaper and lower power form factors will open up new markets for Intel.[62]